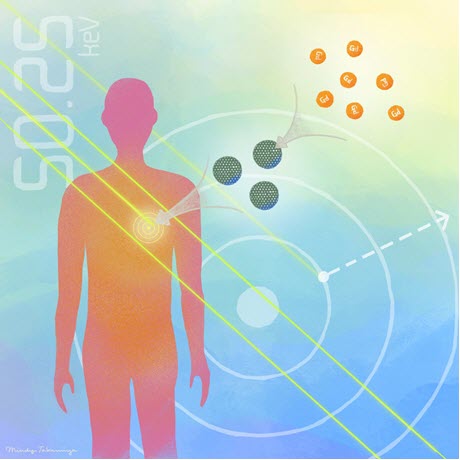 "Our method opens up the possibility of selectively amplifying the effect of X-ray radiation at the tumor site," says Kotaro Matsumoto of Kyoto University's Institute for Integrated Cell-Material Sciences (iCeMS), who developed the technique with Fuyuhiko Tamanoi and colleagues in Japan, Vietnam, and the USA. "This solves one of the major problems of current radiation therapies, where only a small amount of X-rays actually reach the tumor."

Conventional radiation therapies employ polychromatic X-rays, consisting of various energy levels, with low-energy X-rays failing to penetrate the body's surface. Monochromatic X-rays, on the other hand, have the same precisely tuned energy level. If they could be aimed at electron-releasing chemical elements inside tumors, they could be damaging.

To achieve this, the researchers used specially designed silica nanoparticles that were loaded with the chemical element gadolinium. The cancer cells in a 3D tumor culture effectively consumed the particles after one day of incubation. The particles specifically located just outside tumor cell nuclei, where their most critical machinery is found.

Tuning the X-rays to an energy level just below 50.25keV did not have the same effect. The researchers explain that the X-rays are specifically tuned so that their energy can be absorbed by gadolinium. When they hit it, gadolinium releases low-energy electrons into the cancer cell, damaging its vital components, including DNA, and killing it.

The X-rays had no effect on cells that did not contain gadolinium-loaded nanoparticles.