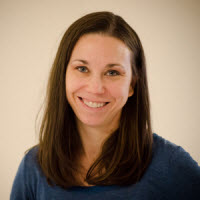 Jeffra K. Schaefer, assistant research professor in Rutgers’ Department of Environmental Sciences.Photo Courtesy of Jeffra K. SchaeferA highly toxic form of mercury could jump by 300 to 600 percent in zooplankton—tiny animals at the base of the marine food chain—if land runoff increases by 15 to 30 percent, according to a new study.

And such an increase is possible due to climate change, according to the pioneering study by Rutgers University and other scientists published Jan. 27 in Science Advances.

“With climate change, we expect increased precipitation in many areas in the Northern Hemisphere, leading to more runoff,” said Jeffra K. Schaefer, study coauthor and assistant research professor in Rutgers’ Department of Environmental Sciences. “That means a greater discharge of mercury and organic carbon to coastal ecosystems, which leads to higher levels of mercury in the small animals living there. These coastal regions are major feeding grounds for fish, and thus the organisms living there serve as an important source of mercury that accumulates to high levels in the fish people like to eat.”

The study showed that an increase in natural organic matter entering coastal waters can boost the bioaccumulation of methylmercury—a highly toxic chemical found at elevated levels in many species of fish—in zooplankton by 200 to 700 percent. The huge increase in methylmercury shifts the food web from being autotrophic (largely microscopic plants and cyanobacteria that make food from inorganic matter) to heterotrophic (bacteria that eat organic matter produced by plants and cyanobacteria).

Natural organic matter from plants and animals in runoff also increased methylmercury levels in water by up to 200 percent, increasing exposure to the chemical in the food web, the study says.

Mercury is one of the top ten chemicals of major public health concern, according to the World Health Organization (WHO), and the U.S. Environmental Protection Agency (EPA) says mercury is the main cause of fish consumption advisories aimed at protecting human health, the study notes.

Since the industrial era began, mercury that winds up in ecosystems is estimated to have increased by 200 to 500 percent, the study says. Mercury accumulates in fish and shellfish as methylmercury, which can affect the nervous, digestive and immune systems, as well as the lungs, kidneys, skin, and eyes. 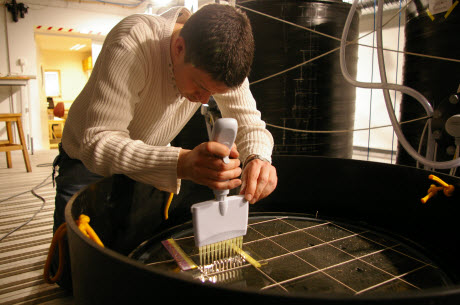 Erik Björn of Umeå University in Sweden injects small amounts of enriched mercury isotopes into sediments for the experiment.Photo credit: Sofi JonssonFor the study, a group of scientists in Sweden tried to recreate the environmental conditions in a Bothnian Sea estuary off Sweden’s east coast. They created simulated ecosystems that took up two floors of a building. They collected intact sediment cores from the estuary, added water, nutrients and mercury, and studied what happened to the mercury, zooplankton, and other organisms. Schaefer’s role was to study microorganisms in the sediment that are responsible for producing the methylmercury which accumulates in the food web.

The results showed the importance of including the food web-related impacts of climate change on the bioaccumulation of methylmercury in future mercury models and risk assessments, the study says.

“We found that the increase in organic matter changed the food web structure in the simulated estuary and that had an impact on the mercury accumulation in zooplankton,” Schaefer said. “That was the most dramatic effect.”

“This is quite an important study,” she added. “People haven’t really considered the changes in food web structure at the bottom of the food chain and a link to mercury accumulation. I think these findings are quite surprising and, in hindsight, they make sense.”

Efforts to reduce mercury emissions may be offset by the impacts of climate change, including increased precipitation and runoff, and we might not see an expected decrease of methylmercury in the food web, she said.