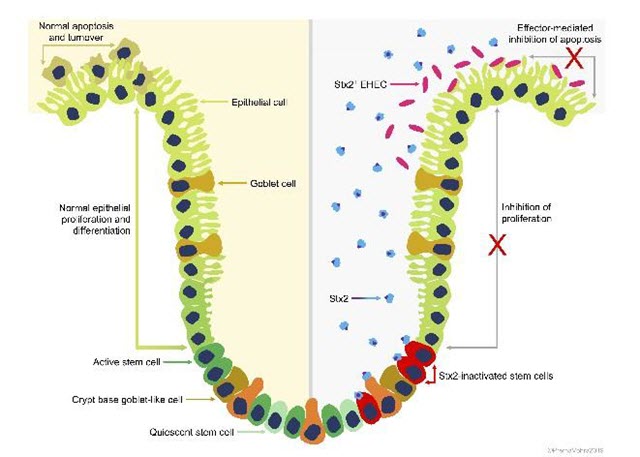 Shiga toxin subtype 2a (Stx2a) may play a key role in promoting the colonization and transmission of life-threatening Escherichia coli strains in cattle, according to a study published Oct. 3 in the open-access journal PLOS Pathogens by Tom McNeilly of the Moredun Research Institute, David Gally of the University of Edinburgh, and colleagues. As these bacteria evolve ways to increase the activity of Shiga toxins, they may become more of a threat to human health.

Specific E. coli strains infected with viruses that produce Shiga toxin can be a threat to human health, leading to severe symptoms including bloody diarrhea and kidney damage. In many countries, the most serious symptoms in humans are associated with E. coli strains that express Stx2a. For example, E. coli O157 strains that express the Stx2a subtype are associated with life-threatening human infections in the UK. By contrast, these strains do not produce symptoms in cattle—a natural reservoir host. The role of this toxin in the animal reservoir is still not entirely clear.

In the new study, McNeilly and Gally tested whether Stx2a is important for calf-to-calf transmission by comparing E. coli O157 strains with and without Stx2a. They found that Stx2a is produced rapidly, restricts the growth of bovine gastrointestinal organoids, and plays a role in establishing E. coli O157 colonization in the bovine gastrointestinal tract. The findings also show that Stx2a facilitates effective cattle-to-cattle transmission and may have led to the expansion of Stx2a producing E. coli O157 strains in cattle populations. The authors propose a model in which Stx2a enhances E. coli O157 colonization by restricting the regeneration and turnover of the tissue lining the gut. According to the authors, research in this area highlights the value of understanding Shiga toxin activity and drivers for its selection and maintenance in the animal reservoir, which may inform strategies that can reduce the threat to human health.

"This study demonstrates for the first time an important role for Shiga toxin subtype-2a (Stx2a) in enhancing transmission of Escherichia coli O157 between cattle, the most important reservoir of infection for these dangerous human pathogensm," adds McNeilly. "This explains the successful emergence of Stx2a positive E. coli strains in cattle populations, and has consequences for human infections as strains encoding Stx2a are more likely to cause severe human disease."

Gally comments, "The study is important as it explains why the Stx2a toxin subtype has become common in E. coli O157 strains in cattle: (1) that it can be produced more rapidly compared to some other Stx subtypes and so has taken over; (2) that it provides an advantage in the animal host by halting the usual turnover of gut cells that would remove adherent E. coli, so the bacteria colonise more easily, persist in the gut and can be excreted at high levels to go onto infect other animals and humans."