Excess nitrogen from agricultural runoff can enter surface waters with devastating effects. Algal blooms and fish kills are a just a couple of possible consequences. But riparian buffer zones—areas of grasses, perennials, or trees—between farmlands and streams or rivers can help. 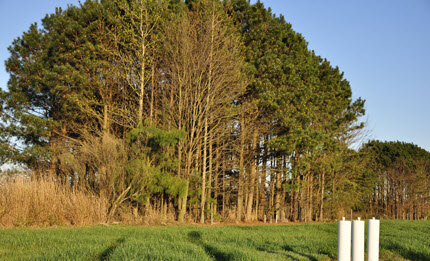 View of trees and switchgrass buffer plots from the field. The tubes in front are for sampling ground water depth.Photo credit: Wes Childres“Riparian buffer zones are nature's hydraulic shock absorbers,” says Deanna Osmond, a soil scientist at North Carolina State University. They can reduce pollution and provide habitat for wildlife. Trees can hold stream banks together and provide food for animals. These buffer zones can also dampen the flow of agricultural runoff. This can lead to lower amounts of nitrogen reaching streams and rivers.

But what kind of vegetation makes buffer zones most efficient at removing nitrogen from runoff? That is the question that Osmond and her colleagues set out to answer.

Their recent study showed that—at least for some areas—it doesn't matter what kind of vegetation buffer zones are made up of. There appeared to be no significant differences in how efficiently they removed nitrogen from agricultural runoff.

Irrespective of vegetation type, wider buffer zones were more effective than narrower ones. It is important to consider the width of buffers, says Osmond. “There is a trade-off between productive farmlands and buffer zones.” Farmers cannot grow crops in buffer zones.

Previous studies had typically involved buffer zones measuring at least 30 meters wide. The buffers in this study were either 15 or eight meters wide. But even these narrower buffer zones lowered the amount of nitrogen reaching streams. The 15-meter wide buffers were often more than twice as efficient at removing nitrogen from runoff compared to the eight-meter wide ones.

There are a number of ways buffer zones can reduce the amount of nitrogen reaching water sources. Nitrogen in agricultural runoff is usually present as nitrates. Nitrates can be taken up by plants in buffer zones or soil microbes can transform nitrates into the atmosphere as nitrogen gas.

Some previous studies had found that certain vegetation types are more effective at nitrogen removal. That could be because of differences in soil conditions and stream flow. “Location matters when studying riparian buffer zones,” says Osmond.

Related Article: Algae from Clogged Waterways Could Serve as Biofuels and Fertilizer

For example, the majority of previous studies were in areas where streams are more connected to their floodplains. The increased connectivity leads to a higher groundwater table. In areas where the water table is high, nitrates are transformed more efficiently to nitrogen gas. 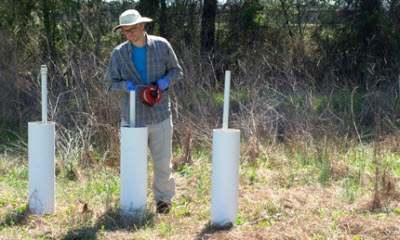 Wes Childres, technician in the Soil Science Department at North Carolina State University, measuring well depth.Photo credit Daniel OrselettaThis study was conducted in the upper coastal plains of North Carolina where the streams were not connected to their floodplains. That could have affected how efficiently the different vegetation types removed nitrogen from runoff.

Also, the microbes need carbon to eat and live. The process is most efficient when levels of dissolved organic carbon in the soil are high. At all the measurement sites in this study, the dissolved organic carbon levels were low. That may have limited the amount of nitrates being removed from runoff and equalized differences between different vegetation types.

Finally, while many studies measure the effectiveness of preexisting buffer zones, “We started from scratch,” says Osmond. That's important as it more closely reflects the reality in many farms where buffer zones are not preexisting. Osmond's study also tracked the buffer zones for 12 years, far longer than most other studies. The longer time-span could also help explain why these results are different from some previous studies.

Read more about Osmond’s study in the Journal of Environmental Quality.