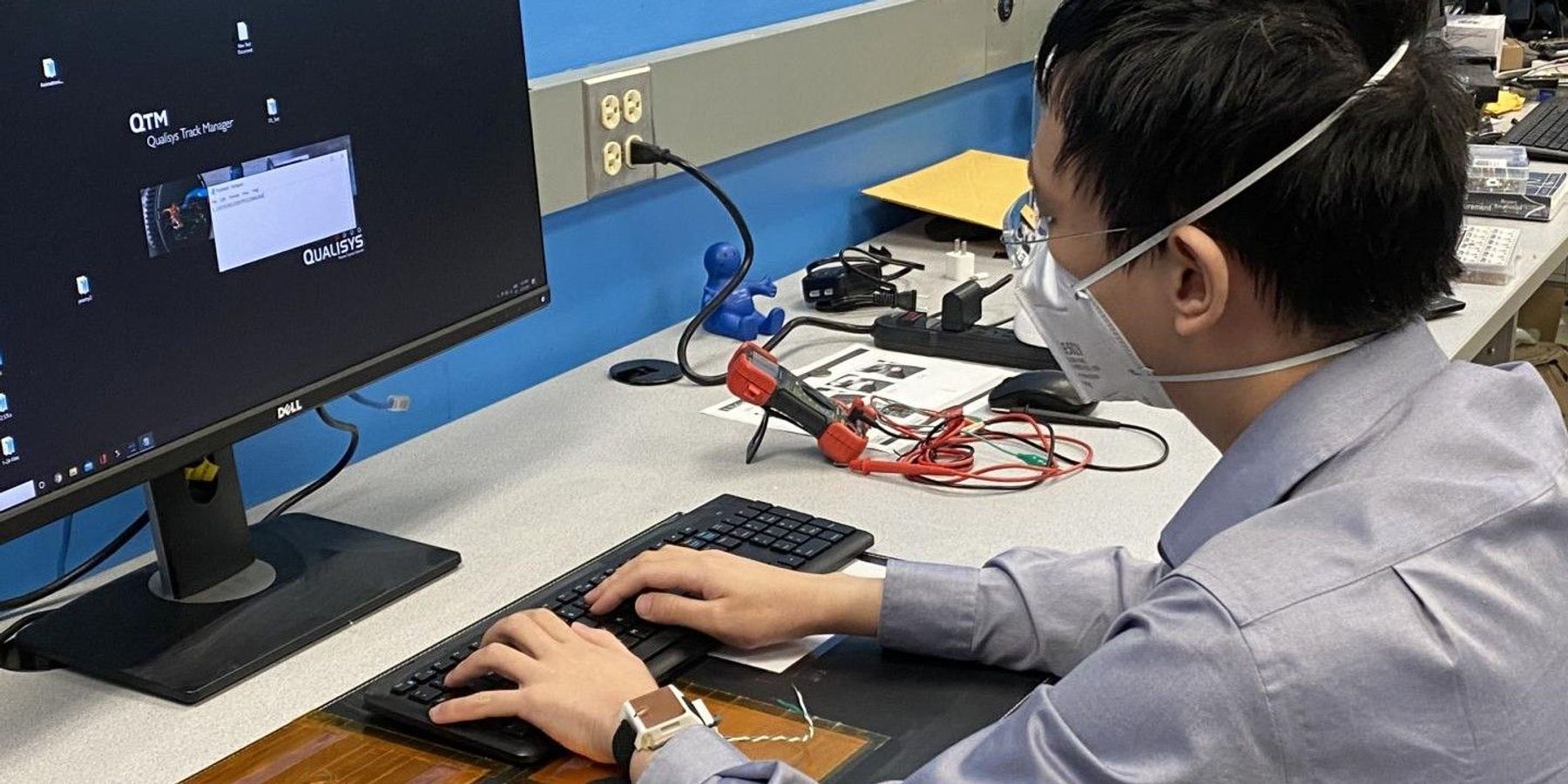 Sunghoon Ivan Lee demonstrates how the wearable device is charged through his left forearm's contact with the power transmitter below the keyboard.
UMass Amherst

As smart watches are increasingly able to monitor the vital signs of health, including what's going on when we sleep, a problem has emerged: those wearable, wireless devices are often disconnected from our body overnight, being charged at the bedside.

"Quality of sleep and its patterns contain a lot of important information about patients' health conditions," says Sunghoon Ivan Lee, assistant professor in the University of Massachusetts (UMass) Amherst College of Information and Computer Sciences and director of the Advanced Human Health Analytics Laboratory.

But that information can't be tracked on smartwatches if the wearable devices are being charged as users sleep, which prior research has shown is frequently the case. Lee adds, "The main reason users discontinue the long-term use of wearable devices is because they have to frequently charge the on-device battery."

Pondering this problem, Lee brainstormed with UMass Amherst wearable computing engineer Jeremy Gummeson to find a solution to continuously recharge these devices on the body so they can monitor the user's health 24/7.

The scientists' aha moment came when they realized "human skin is a conductible material," Lee recalls. "Why can't we instrument daily objects, such as the office desk, chair, and car steering wheel, so they can seamlessly transfer power through human skin to charge up a watch or any wearable sensor while the users interact with them? Like, using human skin as a wire.

Then we can motivate people to do things like sleep tracking because they never have to take their watch off to charge it," he adds.

In a paper published in the Proceedings of the ACM on Interactive Mobile, Wearable and Ubiquitous Technologies, Lee, Gummeson, and lead author Noor Mohammed, a PhD student in Lee's lab, lay out the technical groundwork and showcase its feasibility. "I am hopeful that this will open a lot of possibilities toward the development of battery-less wearable devices both for consumer and clinical applications," Mohammed says.

This week, the UMass Amherst team received a $598,720 grant from the National Science Foundation to continue to develop the system's hardware and software.

Gummeson, an assistant professor of electrical and computer engineering, explains how the technology uses human tissue as a transfer medium for power. "In this device we have an electrode that couples to the human body, which you could think of as the red wire, if you're thinking of a traditional battery with a pair of red and black wires," he says.

The conventional black wire is established between two metal plates that are embedded on the wearable device and an instrumented everyday object that becomes coupled (or virtually connected) via the surrounding environment when the frequency of the energy carrier signal is sufficiently high—in the hundreds of megahertz (MHz) range.

The researchers tested a prototype of their technology with 10 people in three scenarios during which the individuals' arm or hand made contact with the power transmitter—either as they worked on a desktop keyboard or a laptop, or as they were holding the steering wheel of a car.

Their research showed that approximately 0.5–1 milliwatt of direct current power was transferred to the wrist-worn device using the skin as the transfer medium. This small amount of electricity conforms to safety regulations established by the International Commission on Non-Ionizing Radiation Protection and Federal Communications Commission.

"You can think of the amount of power that gets transmitted by our technology as roughly comparable to what's transmitted through the human body when you stand on a body composition scale, hence poses minimal health risks," Gummeson says.

There is no sensation to the person who comes into contact with the power transmitter. "This is way beyond the frequency range that the human can actually perceive," Lee says.

The prototype currently doesn't produce enough power to continuously operate a sophisticated device such as an Apple Watch but could support ultra-low-power fitness trackers like Fitbit Flex and Xiaomi Mi-Bands.

The UMass Amherst team aims to improve the power transfer rate in subsequent studies and says smart wearable devices also will become more power efficient as technologies advance. "We imagine in the future as we further optimize the power that's consumed by the wearable sensors, we could reduce and ultimately eliminate the charging time," Gummeson says.

Lee adds, "We think this is an innovative solution."

- This press release was originally published on the University of Massachusetts Amherst website.