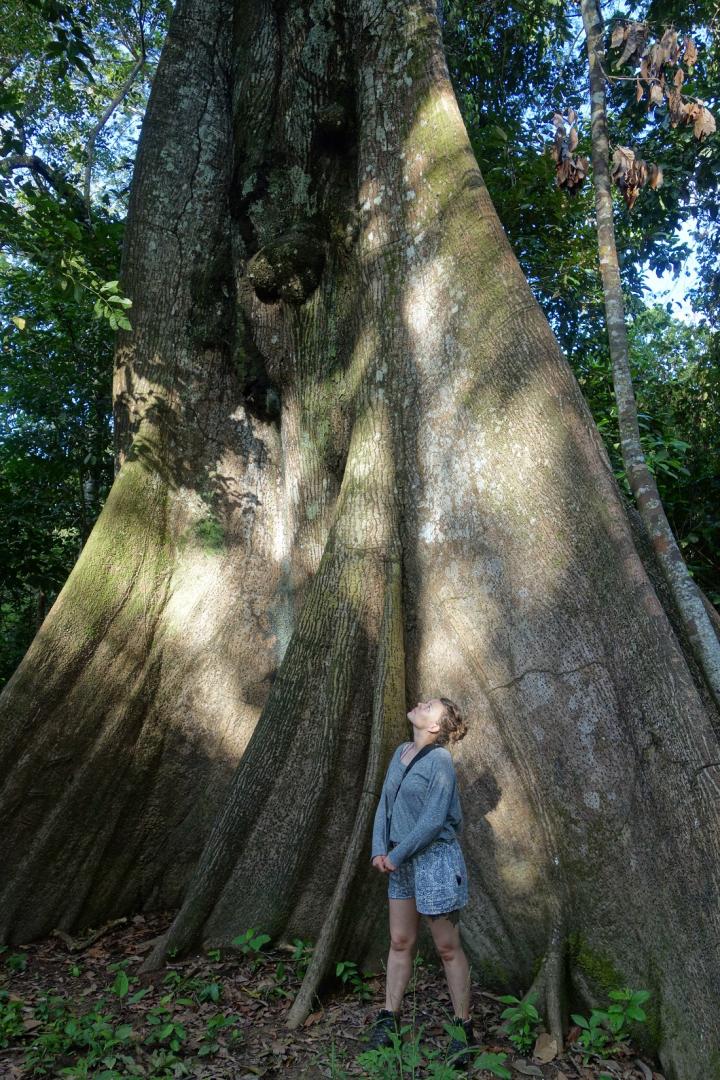 Researcher Emma-Liina Marjakangas in the Mamirauá Sustainable Development Reserve in Brazil. Marjakangas was first author on a paper that explored how forest fragmentation affected seed dispersal, among other factors.
Antti Miettinen

Biodiversity loss is the biggest environmental problem we face today, according to a UN report that came out last year. One of the main reasons is that large forest areas are disappearing due to human impact.

A lack of connected forests can prevent trees from multiplying efficiently. The more fragmented the forest becomes, the greater the problem for the trees.

"Forest fragmentation has a negative effect on seed dispersal by means of animals," says Emma-Liina Marjakangas at the Centre for Biodiversity Dynamics (CBD) at the Norwegian University of Science and Technology (NTNU).

While working on her doctorate, Marjakangas studied 1,424 tree species and 407 animal species from 912 sites in forested areas along the Atlantic coast of South America. The data includes both known networks and probable networks, based in part on what species can be found in the same place.

Marjakangas' goal was to look at which species are found along the coast of South America, and to find relationships between these species.

Climate is the main reason for the variation between the different areas, with 26 percent of variations attributable to climate causes. The use of areas around the forest areas accounts for almost as much variation.

Forest fragmentation can explain about 11 percent of the total variation. But this percentage increases as the forest becomes more fragmented.

"When connected forest areas shrink, this has a greater effect on seed dispersal than the edge effects of various other activities around the forest," says Marjakangas.

Many tree species live in interaction with animals that spread their seeds. Birds and large mammals in particular often contribute significantly to seed dispersal. In return, the trees contribute food, housing, and hiding places for the animals.

Large forests often have room for more species than small forests do. Some species that would normally scatter seeds are not able to survive in small patches of forest, or fragmentation hinders their ability to move from one area to another.

If the activity of the animals becomes restricted, so does the dispersal of seeds. And should the animals disappear completely, this quickly becomes a major problem for the plants.

"This imbalance can lead to a cascade effect," Marjakangas says.

When one species disappears, other species may also develop problems, precisely because species are interdependent.

Species disappear or decrease in number for many reasons. They may disappear from a single area or the species may die out. But the underlying cause is usually human activity. Although it may occur in exceptional circumstances, rarely do we eradicate species on purpose. As a rule, species disappear because we destroy their habitats.

Most often this happens because the areas are needed for other activities like agriculture, or because we need resources such as wood or minerals. Sometimes species disappear because people eat the animals and plants.

But mechanisms exist to make the situation better again. Other animal species may mitigate some of the negative effects by taking over the seed dispersal.

For example, when one animal species disappears, it may allow one or more other species to help themselves to a tree's fruits and seeds.

"Reintroducing some bird species that are generalists to an area, along with some rarer specialists, is the most effective method of restoring seed dispersal," says Marjakangas.

Naturally, this applies exclusively to species that previously inhabited the area, since no alien species should be introduced. Species in the wrong place are themselves an environmental problem, but reintroducing species that are at home in an area can be very beneficial.

Some species seem to contribute much more to seed distribution than others. Of the more than 400 animal species studied, Marjakangas found that only 21 of them accounted for more than 40 percent of the seed dispersal.

These are keystone species that warrant extra care if the goal is to preserve as many species as possible. Often these animals are generalists that eat a lot of fruit. In many instances, they are species that are not very discriminating and that can cope under varying conditions.

The trees that struggle the most are often rare specialists that are pollinated by animals and that produce few and large seeds. Several tree species may depend on specialized animal species to spread their seeds.

"Finding out how species interact with each other can give us valuable insights as we try to understand how humans affect biological diversity and ecosystems," says Marjakangas.