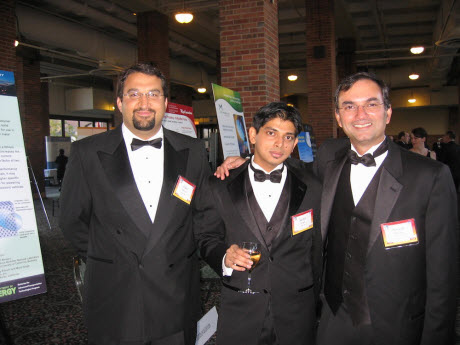 Berkeley Lab researchers and Seeo co-founders (from left) Hany Eitouni, Mohit Singh, and Nitash Balsara won an R&D 100 award in 2008 for their technology.Photo courtesy of Lawrence Berkeley National LaboratoryAs often happens in science, what started as a research project to make one thing turned into something completely different. Lawrence Berkeley National Laboratory (Berkeley Lab) researchers Nitash Balsara and Hany Eitouni were developing an electroresponsive polymer that turned out to be not such a good artificial muscle, their original goal, but an excellent basis for a battery electrolyte—so good, in fact, that it was recently acquired by a major multinational company.

Their journey from the research lab to startup to corporate acquisition took 12 years but culminated in one of the most successful outcomes for a battery startup in recent years or for the more than 40 startups based on Berkeley Lab technology that have launched since 1990.

Seeo, the startup founded by Balsara and Eitouni along with Berkeley Lab researcher Mohit Singh, announced recently that it was being acquired by Bosch, a German multinational that makes appliances and industrial parts and is the world’s largest supplier of automotive components. The terms of the deal were not disclosed.

“This is a great opportunity for groundbreaking technology to be realized by a large, multinational company,” said Elsie Quaite-Randall, Berkeley Lab’s Chief Technology Transfer Officer. “The seeds were planted here at Berkeley Lab. It takes time for the Lab’s breakthrough technologies to reach this stage, and it’s exciting to see the progression from fundamental science to startup technology to sought-after opportunity of global interest.”

Eitouni said Seeo’s technology could double a battery’s energy, which would double the driving range of an electric vehicle, going a long way towards making them more attractive to consumers. “We’ve built experimental cells with double the energy,” he said. “We’ve been getting good performance in our testing, and they’re in pilot production.”

Mohit Singh’s postdoctoral work at Berkeley Lab laid the foundation for Seeo’s technology. With Eitouni’s help, he synthesized and characterized a series of nanostructured solid polymer electrolytes for use in high-energy lithium batteries. The advantage of a solid over liquid electrolyte is that it’s nonflammable. Plus, this electrolyte allows use of high-energy lithium-metal anodes.

Back in 2000, Balsara had just moved to Berkeley, where he has a joint appointment as a professor at UC Berkeley, and Eitouni was his first Berkeley graduate student. “Nitash was a polymer guy. I was the first student in his career to work on electrochemistry,” Eitouni said. “He has a good ability to take a problem and break it down to fundamental pursuits. His charisma is contagious, and he’s a lot of fun to work with.”

The idea of the electroresponsive polymer was to use electrochemistry to control the polymer structure. “In the end that didn’t work out so well as an artificial muscle, but there was a lot of interesting science, and it was the beginning of a framework that continued for the next ten years,” Eitouni said. “The technology that became Seeo was the exact opposite—we were using the nanostructure of a block polymer to control the electrochemistry. It’s this nanostructure property that enables it to be used in high-energy battery cells.”

The idea was patented in 2006, after years of research in the lab. “For three years it was a pure labor of love,” Balsara said. “With electrolytes people generally thought the more fluid you make it, the more rapidly it will conduct ions; we showed generally that’s not true. That suggested a totally different design strategy for making batteries that were solid without sacrificing conduction through the electrolyte.”

Once the concept was proven, they realized that forming a startup company was the the most effective way to develop it further. “The idea was to build a new kind of battery and show that it can be built,” said Balsara, who left Seeo in 2012. “Often with startups, by the time the technology is commercialized, it’s only vaguely related to what it was when it started. In this case it’s directly related.”

A breakthrough battery is considered essential to addressing the world’s energy and climate problems. But with the complex technology and advanced manufacturing, battery startups face many challenges. Thus the deal with Bosch made sense for Seeo.

“It became clear with all the consolidations in the industry and the difficulties that other American battery companies had, like A123 and EnerDel, that the only way for this technology to come to market would be to work with a larger company with the financial resources to push it all the way through,” Eitouni said.

Balsara credits the early-stage government funding, provided by the U.S. Department of Energy’s Office of Energy Efficiency and Renewable Energy through the Batteries for Advanced Transportation Technologies (BATT) program, with enabling the original breakthrough. “This shows the value of a national lab,” he said. “This could not have been developed at a company, where timelines don’t allow for systematic studies on fundamental problems. I was, and still am, a ‘polymer guy.’ Collaborations across disciplines have long been the hallmark of Berkeley Lab. I was fortunate to find mentors like John Newman and Venkat Srinivasan who continue to educate my students and me as we grapple with problems in electrochemical engineering.”