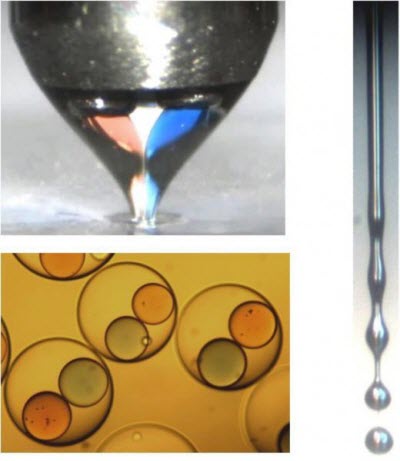 A new device creates tiny capsules filled with multiple inner droplets by funneling different ingredients through two inner needles. As all the ingredients exit the needles through a single nozzle, a high-speed gas forces the liquids into a narrow stream that breaks up into individual droplets.Image credit: Ronald Xu/Ohio State UniversityNewswise — Chemotherapy often comes with powerful side effects, and one of the reasons for this is that the drugs used to kill cancer cells can also damage other fast-growing cells in the body, like hair follicles. But one possibility for reducing these side effects may be if the chemotherapy drugs only become toxic when they reach the tumor.

The search for such targeted drug delivery options for chemotherapy and other treatments inspired a team of researchers from the University of Science and Technology of China and Ohio State University to develop a new way to package two or more ingredients into a single capsule. If the ingredients must be mixed for the drug to work, doctors could trigger the mixing in targeted areas of the body, boosting drug efficiency while reducing side effects.

The researchers report their method for multi-ingredient encapsulation and triggered mixing in a new paper in the journal Applied Physics Letters, from AIP Publishing. While the work has shown promise because it allows the researcher to produce micro capsules, they have not yet used the technique to encapsulate cancer treatments. If such capsules can be made, they will have to prove safe and effective in clinical trials before becoming widely available to treat cancer.

“One of the limitations of chemotherapy is that less than 5 percent of the drugs typically get to the tumor, while the rest can be absorbed by other organs,” said Ronald Xu, a professor in biomedical engineering at Ohio State University in Columbus, Ohio. One possible way to address the problem could be to make the drugs non-toxic when injected into the body and trigger mixing that would produce a toxic product only near the tumor site.

For such drugs to work on a large scale, there must be a way to quickly, controllably, and cost-effectively produce capsules with two or more active ingredients. If the drugs are to be injected and spread through the body via the bloodstream, the capsules should also be small.

Xu and his colleagues from the University of Science and Technology of China developed a device that can produce tiny capsules approximately 100 microns across (about the size of a speck of dust) with multiple inner ingredients. Ting Si, the first author on the paper and an expert in fluid mechanics, also developed mathematical models that show the relationship between process parameters, like flow rate and needle diameter, and the size of the final capsules. The models were used to achieve the designated capsule sizes.

The device works by funneling different ingredients through two inner needles. The inner needles run parallel to each other and are both enclosed in a larger outer needle, which contains an ingredient for making the outer shell of the capsule. As all the ingredients exit the needles through a single nozzle, a high-speed gas forces the liquids into a narrow stream that breaks up into individual droplets. An electric field stabilizes the flow so that uniform droplets are created. Depending on the relative flow rates, each droplet may contain two or more smaller inner droplets made from the ingredients in the inner needles.

The researchers tested their device with colored paraffin wax–red in one needle and blue in the other. The outer shell was made from sodium alginate–a material extracted from seaweed that turned gelatinous when the droplets fell into a calcium chloride solution.

Depending on the experimental conditions, the team was able to produce between 1,000 to 100,000 capsules per second, and nearly 100 percent of the inner liquids were incorporated into the capsules without any waste. Once encapsulated, the two colors of wax did not mix, because of surface tension, but the team demonstrated that they could force the red and blue wax to merge by vibrating the capsules. The team also demonstrated that they could release the inner droplets by dissolving the outer shell.

The key features of the new device are its high efficiency and yield, and the fact that the size of the droplets can be uniformly controlled, Xu said. By further fine-tuning the device’s operation Xu predicts that the team could make capsules that are 3-5 microns across, about the size of a red blood cell. The process can also be easily scaled up by building an array of nozzles and could be modified to encapsulate three or more active ingredients by adding additional inner needles.

While Xu and his colleagues were motivated by drug delivery, their device might also find wider use in a range of applications that require controlled reactions, such as regenerative medicine, and nuclear and chemical engineering, Xu said.