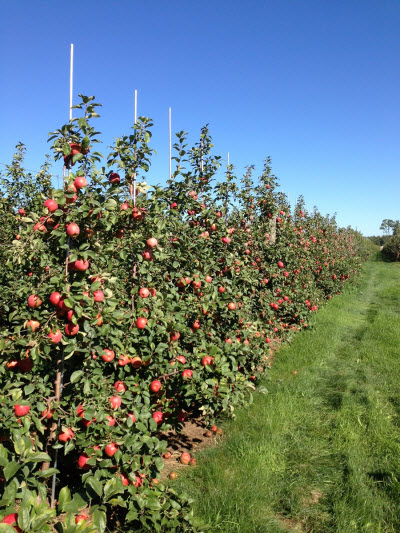 Nationwide, 19 awards totaling $36.5 million were given for agriculture and extension to support American farmers growing fruits and vegetables, tree nuts, dried fruits, ornamentals, and nursery crops. The two Cornell-led grants were the only ones awarded to New York state projects.

“Great apples start from the ground up, and I applaud Senators Gillibrand and Schumer for recognizing the importance of rootstock and for their support of this crucial program,” said Kathryn J. Boor, the Ronald P. Lynch Dean of the College of Agriculture and Life Sciences. “This project will not only provide Americans with sustainably produced, healthy, high-quality fruit, but will also ensure that U.S. farmers remain competitive in international markets.”

Lailiang Cheng, project director and professor of horticultural physiology, will lead a national team to improve the economic and environmental sustainability of current apple production systems by focusing on rootstocks (the part of the tree below ground) that improve disease resistance, fruit quality, and yield, and tolerate environmental stresses.

Currently, the U.S. apple industry widely uses rootstocks that are vulnerable to replant disease, which causes apple trees to grow poorly when planted on old orchard sites. These apple rootstocks are also susceptible to soil stresses including low and high soil pH, salinity, and nutrient stress. These biotic and abiotic stresses lead to fruit losses that cost U.S. apple growers more than $300 million per year.

“The deficiencies of current rootstocks create an urgency to develop and adopt new, improved rootstock varieties,” Cheng said. “However, to prevent costly mistakes in planting inferior rootstocks, there is a critical need to thoroughly evaluate new candidate rootstocks before we adopt them.”

The research will test potential new rootstocks and identify genetic markers in them for root traits related to replant disease and soil stress tolerance. The team aims to improve fruit quality of high-value cultivars, such as Honeycrisp.

The group also plans to incorporate new digital outreach strategies, such as using Twitter, webinars, and eXtension, as well as traditional extension efforts to inform U.S. apple growers of their findings.

New York is one of the top three apple-growing states, along with Washington and Michigan. 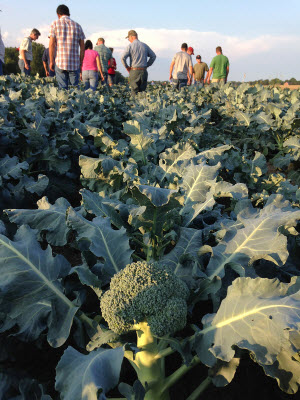 Though broccoli is a popular vegetable in the eastern U.S., summer nights are too warm and humid for current varieties. Instead, broccoli is grown in the water-scarce West and trucked from there.

The project, which began in 2011, aims to establish the new industry by 2021 and takes a systems approach that includes breeders, production specialists, and market developers, and incorporates industry partners in every area.

Once complete, the new industry will produce an important vegetable locally, promote economic development in depressed East Coast communities, and reduce the use of fossil fuels for transportation and irrigation water in the western U.S.

“Our vision is to create a regional food network for an increasingly important and nutritious vegetable that may serve as a model for other specialty crops,” Bjorkman said.

Project co-directors include researchers from Cornell, North Carolina State University, the University of Tennessee, and the USDA-ARS.

“The Specialty Crop Research Initiative allows horticultural researchers to tackle large-scale challenges through the application of basic science and collaboration with multiple sectors of industry, providing them the means to make a positive difference in society from field to fork,” said Boor.