"For the first time, we've found specific direct targets for LKB1 that prevent lung cancer and discovered—very unexpectedly—that inflammation plays a role in this tumor growth," says professor Reuben Shaw, director of the Salk Cancer Center and senior author of the paper. "With this knowledge we can hopefully develop new treatments for this large fraction of lung cancer patients." 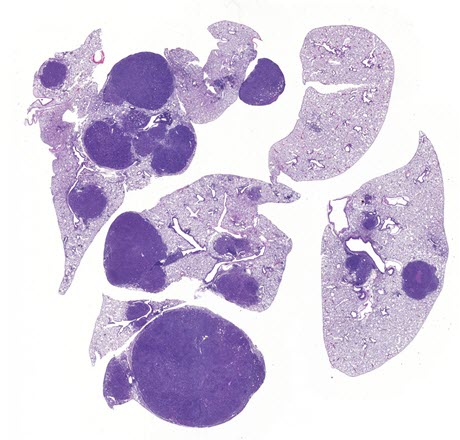 Image of lung cancer shows normal lung (light purple) and tumors (dark purple). Inactivation of SIK1 and SIK3 leads to tumor growth and inflammation, revealing for the first time that SIK kinases mediate key functions of LKB1 in preventing lung cancer.Credit: Salk InstituteWhen functioning normally, LKB1 acts as a tumor suppressor, actively preventing cancer from forming in the first place. Scientists knew that the LKB1 gene worked like the captain of a relay team, passing cellular signals, like a baton, to enzymes called kinases, that then passed the signal to other enzymes in a chain reaction. LKB1 acts as the captain of a team consisting of 14 different kinase teammates. But which of these kinases is specifically responsible for carrying on LKB1's tumor suppressive function has been unclear for the more than 15 years since LKB1 was first identified as a major gene disrupted in lung cancer. In 2018, the Shaw lab solved the first step of this molecular whodunnit by showing that 2 of the 14 teammates (the main enzymes known to control metabolism and growth) were surprisingly not as important to LKB1's effects to block lung cancer as most scientists had assumed. That left 12 of their kinase teammates as potentially important, but almost nothing was known about them.

"This is was like a cancer detective case. We suspected that one of these 12 kinases was likely the key to the tumor suppressing effects of LKB1, but we were not sure which one," says Pablo Hollstein, first author on the paper and a postdoctoral fellow at Salk.

To figure it out, the team used CRISPR technology combined with genetic analysis to inactivate each suspected kinase one at a time and then in combinations. They observed how the inactivations affected tumor growth and development in both cell cultures of NSCLC cells and in a genetic NSCLC mouse model. The experiments pointed the researchers to two kinases: one called SIK1 had the strongest effect in stopping tumors from forming. When SIK1 was inactivated, tumor growth increased; and when a related kinase, SIK3, was also inactivated, the tumor grew even more aggressively.

"Discovering that of the 14 kinases it was SIK1 and SIK3 that were the most critical players is like discovering that the relatively unknown backup quarterback who almost never plays is actually one of the most important quarterbacks in the history of the sport," says Shaw.

LKB1 is also known to play a role in suppressing inflammation in cells generally, so the researchers were intrigued to discover that SIK1 and SIK3 were specifically inhibiting the cellular inflammation response in lung cancer cells. Thus, when LKB1 or SIK1 and SIK3 become mutated in tumors, inflammation is increased, driving tumor growth.

In a related vein, Salk professor Marc Montminy recently published a paper along with Shaw, identifying metabolic switches to which SIK1 and SIK3 "pass the baton," revealing three steps of the relay started by LKB1.

"By attacking the problem of lung cancer from different angles, we have now defined a single direct route that underpins how the disease develops in many patients," says Shaw, who holds the William R. Brody Chair. "We have been working on this project since I started my lab in 2006, so it is incredibly rewarding and astonishing to find that inflammation is a driving force in tumor formation in this very clearly defined set of lung cancers. This discovery highlights the nature of scientific research and how important it is to commit to pursuing difficult, complicated problems, even if it takes over 10 years to get an answer."

Next, the researchers plan to further investigate how these kinase-driven switches in inflammation trigger lung tumor growth in NSCLC.