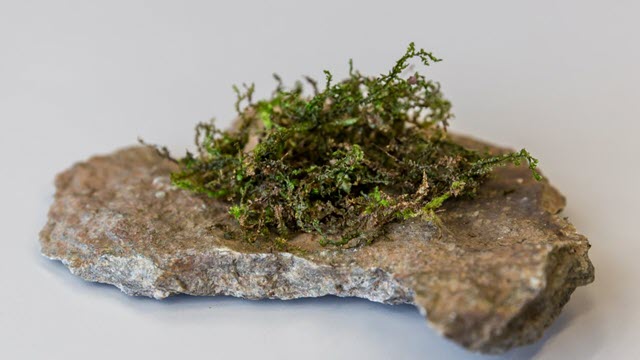 Currently, the medicinal use of cannabinoids, extracted from cannabis, is a subject of debate around the world. In Switzerland, more and more people are advocating for increased research into cannabis. Today, tetrahydrocannabinol (THC) is used in the medical field to deal with certain types of pain, muscle cramps, dizziness, and loss of appetite.

However, it is an illegal narcotic and, accordingly, can trigger side effects. THC in its pure form was first isolated from cannabis in 1964 by Raphael Mechoulam at the Weizmann Institute of Science in Israel. Until now, it was thought that cannabis was the only plant that produces THC. However, as early as 1994, Japanese phytochemist Yoshinori Asakawa had discovered a substance in the liverwort plant Radula perrottetii that was related to THC and had named this natural substance "perrottetinene." In this natural product, the individual atoms are linked together in a manner similar to that of THC, however they differ in their three-dimensional structure and further exhibit an additional benzyl group.

A few years ago, Jürg Gertsch from the Institute of Biochemistry and Molecular Medicine at the University of Bern discovered that liverworts were being advertised as so-called "legal highs" on the internet. At the time, nothing was known about the pharmacological effects of this substance. Together with chemists from Erick Carreira's team from the Department of Chemistry at the ETH Zürich, Gertsch's research team in Bern biochemically and pharmacologically compared THC and perrottetinene.

Using animal models, they were able to demonstrate that perrottetinene reaches the brain very easily and that, once there, it specifically activates cannabinoid receptors. It even demonstrates a stronger anti-inflammatory effect in the brain than THC, something that makes perrottetinene particularly interesting when you consider its potential medical application "It's astonishing that only two species of plants, separated by 300 million years of evolution, produce psychoactive cannabinoids," says Gertsch. The study was published in the journal Science Advances.

Perrottetinene is less psychoactive than THC

Low doses of THC have great therapeutic potential when it comes to treating various chronic illnesses. However, to date, THC is rarely used therapeutically. This is because, in higher doses, the substance has a strong psychoactive effect and is an illegal—and thus controlled—narcotic. Andrea Chicca, a member of scientific staff in Jürg Gertsch's group, sees a potential for development in the therapeutic use of perrottetinene or similar substances: "This natural substance has a weaker psychoactive effect and, at the same time, is capable of inhibiting inflammatory processes in the brain." In particular, in contrast to THC, perrottetinene inhibits the prostaglandins in the brain which are factors causing inflammation. In doing so, perrottetinene has an effect on cannabinoid receptors which is similar to that of the endocannabinoids produced by our own bodies. However, according to the researchers, more studies are necessary, for example in pre-clinical models of chronic and inflammatory pain.

Large amounts of this bioactive substance were required for the pharmacological investigations. The collaboration with the chemists in Erick Carreira's group from the ETH Zurich was fundamental for this research project, because it would have been impossible to isolate the natural substance from the liverwort, which only grows in Japan, New Zealand and Costa Rica. To this end, Erick Carreira's group developed a new synthesis method specifically for controlling the three-dimensional structure on a molecular level. "The present study is a prime example of how new synthetic concepts can make a contribution towards enriching our pharmacological knowledge of biologically-active natural substances," said Michael Schafroth in recognition of the ETH Zurich's work. As a PhD student under professor Carreira, Schafroth focused on new synthesis methods for cannabinoids. "Both solid fundamental research in the field of biochemical and pharmacological mechanisms as well as controlled clinical studies are required to carry out cannabinoid research," says Gertsch. To achieve this, researchers from various disciplines are working together.

A Big Leap Forward in Using Iron Catalysts for Pharmaceuticals

A Big Leap Forward in Using Iron Catalysts for Pharmaceuticals