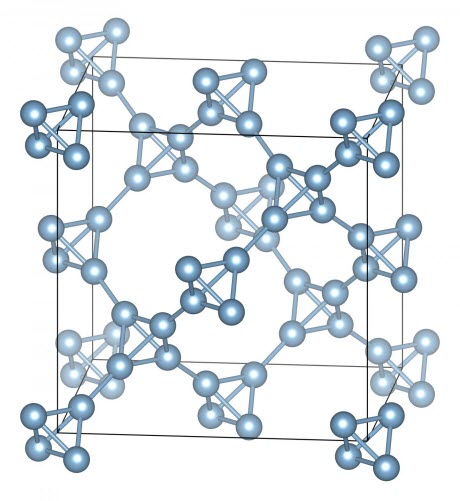 But if you restructure the common household metal at the molecular level, as Boldyrev and colleagues did using computational modeling, you could produce an ultra-light crystalline form of aluminum that's lighter than water. Boldyrev, along with scientists Iliya Getmanskii, Vitaliy Koval, Rusian Minyaev, and Vladimir Minkin of Southern Federal University in Rostov-on Don, Russia, published findings in the Sept. 18, 2017, online edition of The Journal of Physical Chemistry C.

The team's research is supported by the National Science Foundation and the Russian Ministry of Science and Education.

"My colleagues' approach to this challenge was very innovative," says Boldyrev, a professor in USU's Department of Chemistry and Biochemistry. "They started with a known crystal lattice, in this case, a diamond, and substituted every carbon atom with an aluminum tetrahedron."

"That means the new crystallized form will float on water, which has a density of one gram per cubic centimeter," Boldyrev says.

Such a property opens a whole new realm of possible applications for the non-magnetic, corrosive-resistant, abundant, relatively inexpensive and easy-to-produce metal.

"Spaceflight, medicine, wiring, and more lightweight, more fuel-efficient automotive parts are some applications that come to mind," Boldyrev says. "Of course, it's very early to speculate about how this material could be used. There are many unknowns. For one thing, we don't know anything about its strength."

"An amazing aspect of this research is the approach: using a known structure to design a new material," Boldyrev says. "This approach paves the way for future discoveries."