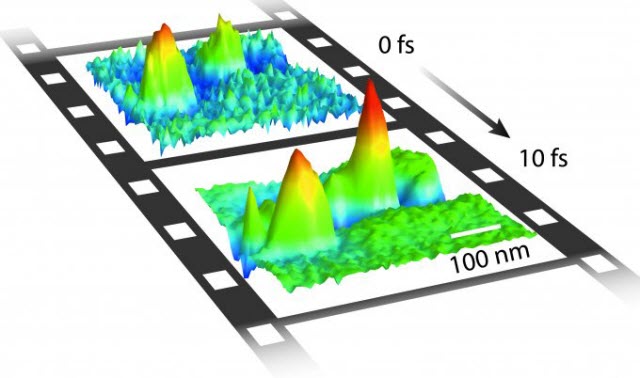 A physics group at CU-Boulder has figured out a way to make the ultimate in slow-motion movies.

Using a new ultrafast optical microscope they developed, the team members are probing and visualizing the atomic scale at–get ready for this–more than a trillion image frames in the blink of an eye. This allows them to make real-time, slow-motion movies of light interacting with electrons in nanomaterials, in this case a thin gold film.

"This is the first time anyone has been able to probe matter on its natural time and length scale," explains physics Professor Markus Raschke. “We imaged and measured the motions of electrons in real space and time, and we were able to make it into a movie to help us better understand the fundamental physical processes.”

Matter is sometimes described as the “stuff of the universe”–the molecules, atoms and charged particles, or ions, that make up everything around us, be it land, sea or air. Matter has several states, most prominently solid, liquid and gas.

According to the CU-Boulder researchers, a number of important processes like photosynthesis, energy conversion and use, and biological functions are based on the transfer of electrons and ions from molecule to molecule. The team used a special technique to focus extraordinarily short laser pulses into tiny bits of gold film matter using a nanometer-sized metal tip.

“Our study brings nanoscale microscopy to the next level, with the ability to capture detailed images evolving on extremely fast time scales,” says Vasily Kravtsov, a CU-Boulder graduate student in physics and first author of the paper.

“This work expands the reach of optical microscopes,” says Raschke. “Using this technique, researchers can image the elementary processes in materials ranging from battery electrodes to solar cells, helping to improve their efficiency and lifetime.”

Unlike electron microscope approaches, the new technique does not require ultra-high vacuum techniques and is particularly promising for studying ultrafast processes like charge and energy transport in soft matter, including biological materials.

A paper on the subject appears in the Feb. 8 issue of Nature Nanotechnology.

The study was funded in part by the National Science Foundation and with support from the Pacific Northwest National Laboratory.