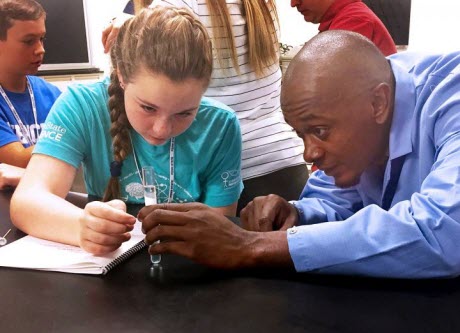 Ireland McDyre with Brandon Ogbunu, Brown University, sees her own DNA.Photo credit: Christian Berg, WPSU, Penn StateFocusing science education on students through genetic and genealogical studies may be the way to increase minorities in the pipeline and engage students who would otherwise deem science too hard or too uninteresting, according to a Penn State anthropologist.

"Henry Louis Gates (Jr.) and I talked about using personalized genetics and genealogy in classrooms as a way to help get kids to understand their heritage and be proud," said Nina Jablonski, Evan Pugh University Professor of Anthropology, Penn State. "And especially for African-American kids to connect with their heritage. Then also, equally, as a way to create interest in science."

Gates is the Alphonse Fletcher University Professor and director of the Hutchins Center for African and African American Research at Harvard University. He has also produced a variety of documentary films and is currently host and expert on the Public Broadcasting System's "Finding Your Roots," which is in its fourth season.

A working group of about 30 people explored the various approaches to this goal. Eventually, the group was whittled down to only a few and an informal approach centered on the "study of me" developed.

"What we wanted to see was if the genetic 'study of me' influences the feelings about science and aspirations about wanting to be a scientist," said Jablonski. "Does it impact understanding?"

The researchers felt it was critical to work with middle school children because that is when children are figuring out who they are and what they are going to do in life. They wanted to influence the middle schoolers before they got to high school to see if this intervention approach was effective. The program and curriculum they developed were for a two-week summer camp which was eventually orchestrated by Penn State's Science U, an outreach program of the Eberly College of Science.

In the process, the group realized that this curriculum and approach would work just as well for high school and introductory undergraduate students. A program was also begun at Spelman College and Morehouse College to incorporate the material as a module in an introductory biology class.

The researchers involved in both projects will present the results of their work at a session, "Understanding Your Roots: STEM Diversity and an Evidence-Based Curriculum," organized by Jablonski Feb. 17 at the annual meeting of the American Association for the Advancement of Science in Austin, Texas.

"We are trying to give students the impactful personal message that history is related to what they are studying," said Jablonski.

By focusing on genealogy and genetics, the curriculum ranges from DNA and inheritance to evolution and the origins of humanity.

"The students become more literate in science, but they also see themselves as part of the genealogy of humanity, that is, ultimately all people united," said Jablonski.

During the summer camp, African-American students were often able to trace their ancestry back to their ancestors' original entry into the new world. This was possible through family oral histories that still exist. Some students of European descent had more trouble getting that far back in their ancestry.

The summer camp includes two days of independent study where kids were able to choose the direction of their studies. Projects ranged from bacteria, to further DNA studies, to genealogical trees of anime characters complete with inherited traits.

"We took the risk to empower these kids," said Jablonski. "The risk paid off in the creative thinking they showed."