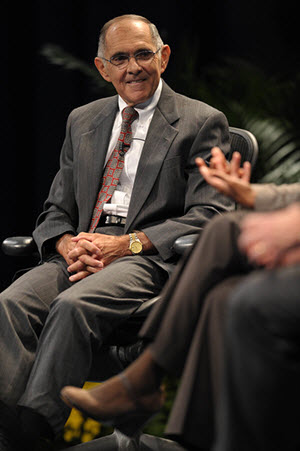 Frank IncroperaPhoto courtesy of the University of Notre DameFrank Incropera acknowledges that it’s somewhat unusual for an engineer to delve deeply into the topic of climate change. Scientists, not engineers, have played the most prominent roles in the climate change debate to date. However, Incropera believes solving the problem going forward will require a joint effort from the two specialties. Scientists have provided an understanding of the problem, and engineers can now evaluate the feasibility of proposed solutions to the problem.

Incropera’s interest in climate change grew out of his interest in energy technology and the future of energy. In the course of his research in those areas, Incropera, the H. Clifford and Evelyn A. Brosey Professor Emeritus of Aerospace and Mechanical Engineering and former Matthew H. McCloskey Dean of the University of Notre Dame’s College of Engineering, became convinced that the future of energy will be determined by global warming and climate change. He began devoting much of his time and energy to studying climate change, approaching the subject with no preconceived notions. After extensive research, he is convinced that the science is clear and that the problem is exclusively due to greenhouse gases. He also came away convinced that the proposed technological solutions alone won’t get us through the problem.

“Let me begin by saying that technology is essential to dealing with the problem of climate change,” Incropera said. “And, it has many facets. Efficiency must be improved in every aspect of energy production and utilization. Decarbonization of transportation must occur through greater use of electric vehicles. Solar and wind energy must be aggressively implemented, with research and development continuing to increase system performance and reduce costs. Battery technologies must advance to facilitate growth in the use of electric vehicles, as well as solar and wind energy. The electric grid must be expanded to better accommodate intermittent sources of energy such as wind and solar, and it must be endowed with intelligence that can better control and respond to changes in production and demand.

“That said, there are technologies whose potential contributions will be curtailed by economics. Although it provides a carbon-free source of electricity, the high cost and long timeline associated with construction of a nuclear power plant will limit its contribution to reducing greenhouse gas emissions. Although there are high expectations that carbon capture and sequestration (CCS) will significantly reduce emissions from coal-fired power plants, large costs and long timelines associated with construction will likely preclude widespread adoption, while the plants continue to discharge large amounts of carbon dioxide into the atmosphere.”

So while technology is essential to reducing greenhouse gas emissions and to mitigating the effects of climate change in a world that will have 9 billion inhabitants by 2050, with billions in developing nations aspiring to Western living standards, technology alone will not be enough, Incropera believes. It will have to be accompanied by behavioral changes for which moderation overrides self-indulgence.

“What I have in mind is moving from a culture of consumption to one in which moderation and conservation become core social values,” he said “In the West, there are certainly people who have a conservation mindset, but there are nations, including the U.S., for which conservation is by no means a social value—that is, one embraced by the society at large. Enabled by historically low costs of fossil fuels, many people are given to waste and over-consumption in their homes, vehicles and other lifestyle choices. The need for people in the West to moderate their consumption will have to be accompanied by the need for people in the developing world to moderate their aspirations. Moderation is not incompatible with achieving a good standard of living.”

Eliminating some of the more frivolous, self-indulgent aspects of energy consumption will be a key to addressing the climate change dilemma, according to Incropera.

“In the U.S. we don’t have to supersize our homes and vehicles,” he said. “We don’t have to overheat homes in winter or supercool them in summer. We can choose to live closer to places of work, recreation and public transportation. Where practical we can use alternative modes of transportation, public and otherwise. We can give more thought to how we use energy and to simple measures for reducing consumption. All of these things can be done without impairing the quality of our lives.”

ncropera’s journey to understand the problem of climate change and how to address it resulted in a new book titled “Climate Change: A Wicked Problem.” The book examines a variety of aspects of the topic of climate change, including the science, economics, public policy and human behavior. He also addresses the ethical and religious dimensions of the issue, a process he began before Pope Francis’ encyclical “Laudato si’.”

Fresh off researching and writing the book, Incropera sees reasons for hope and reasons for caution in light of the new Paris accords.

“Frankly, the Paris meeting exceeded my expectations and far exceeded what was previously accomplished at the 20 previously held meetings,” he said. “A major catalyst was the agreement struck last November between the U.S. and China and the commitments made to reduce or curtail growth in greenhouse gas emissions. The agreement triggered subsequent commitments by more than 96 percent of the nations attending the Paris meeting. Another positive outcome was the extent to which global businesses committed to reducing their emissions. The Paris meeting may well become a turning point in addressing climate change. But, before we get overcome by euphoria, we need to remember that all commitments are nonbinding and what happens after the meeting is at least as important as what transpired at the meeting.”