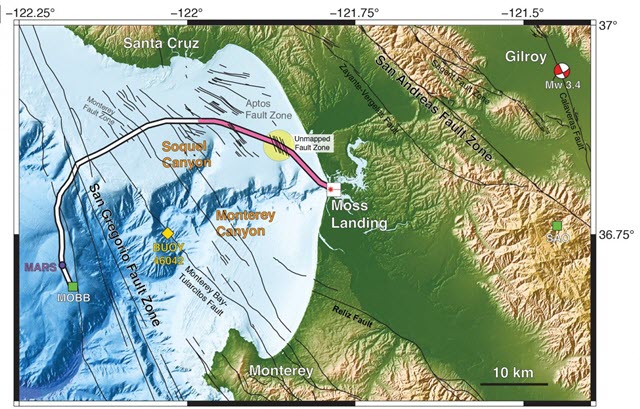 In a paper appearing this week in the journal Science, researchers from the University of California, Berkeley, Lawrence Berkeley National Laboratory (Berkeley Lab), Monterey Bay Aquarium Research Institute (MBARI), and Rice University describe an experiment that turned 20 kilometers of undersea fiber-optic cable into the equivalent of 10,000 seismic stations along the ocean floor. During their four-day experiment in Monterey Bay, they recorded a 3.5 magnitude quake and seismic scattering from underwater fault zones.

Their technique, which they had previously tested with fiber-optic cables on land, could provide much-needed data on quakes that occur under the sea, where few seismic stations exist, leaving 70 percent of Earth's surface without earthquake detectors.

"There is a huge need for seafloor seismology. Any instrumentation you get out into the ocean, even if it is only for the first 50 kilometers from shore, will be very useful," said Nate Lindsey, a UC Berkeley graduate student and lead author of the paper.

Lindsey and Jonathan Ajo-Franklin, a geophysics professor at Rice University in Houston and a visiting faculty scientist at Berkeley Lab, led the experiment with the assistance of Craig Dawe of MBARI, which owns the fiber-optic cable. The cable stretches 52 kilometers offshore to the first seismic station ever placed on the floor of the Pacific Ocean, put there 17 years ago by MBARI and Barbara Romanowicz, a UC Berkeley Professor of the Graduate School in the Department of Earth and Planetary Science. A permanent cable to the Monterey Accelerated Research System (MARS) node was laid in 2009, 20 kilometers of which were used in this test while off-line for yearly maintenance in March 2018.

"This is really a study on the frontier of seismology, the first time anyone has used offshore fiber-optic cables for looking at these types of oceanographic signals or for imaging fault structures," said Ajo-Franklin. "One of the blank spots in the seismographic network worldwide is in the oceans."

The ultimate goal of the researchers' efforts, he said, is to use the dense fiber-optic networks around the world—probably more than 10 million kilometers in all, on both land and under the sea—as sensitive measures of Earth's movement, allowing earthquake monitoring in regions that don't have expensive ground stations like those that dot much of earthquake-prone California and the Pacific Coast.

"The existing seismic network tends to have high-precision instruments, but is relatively sparse, whereas this gives you access to a much denser array," said Ajo-Franklin.

The technique the researchers use is Distributed Acoustic Sensing, which employs a photonic device that sends short pulses of laser light down the cable and detects the backscattering created by strain in the cable that is caused by stretching. With interferometry, they can measure the backscatter every 2 meters (6 feet), effectively turning a 20-kilometer cable into 10,000 individual motion sensors.

"These systems are sensitive to changes of nanometers to hundreds of picometers for every meter of length," Ajo-Franklin said. "That is a one-part-in-a-billion change."

Earlier this year, they reported the results of a six-month trial on land using 22 kilometers of cable near Sacramento emplaced by the Department of Energy as part of its 13,000-mile ESnet Dark Fiber Testbed. Dark fiber refers to optical cables laid underground, but unused or leased out for short-term use, in contrast to the actively used "lit" internet. The researchers were able to monitor seismic activity and environmental noise and obtain subsurface images at a higher resolution and larger scale than would have been possible with a traditional sensor network.

"The beauty of fiber-optic seismology is that you can use existing telecommunications cables without having to put out 10,000 seismometers," Lindsey said. "You just walk out to the site and connect the instrument to the end of the fiber."

During the underwater test, they were able to measure a broad range of frequencies of seismic waves from a magnitude 3.4 earthquake that occurred 45 kilometers inland near Gilroy, California, and map multiple known and previously unmapped submarine fault zones, part of the San Gregorio Fault system. They also were able to detect steady-state ocean waves—so-called ocean microseisms—as well as storm waves, all of which matched buoy and land seismic measurements.

"We have huge knowledge gaps about processes on the ocean floor and the structure of the oceanic crust because it is challenging to put instruments like seismometers at the bottom of the sea," said Michael Manga, a UC Berkeley professor of earth and planetary science. "This research shows the promise of using existing fiber-optic cables as arrays of sensors to image in new ways. Here, they've identified previously hypothesized waves that had not been detected before."

According to Lindsey, there's rising interest among seismologists to record Earth's ambient noise field caused by interactions between the ocean and the continental land: essentially, waves sloshing around near coastlines.

"By using these coastal fiber optic cables, we can basically watch the waves we are used to seeing from shore mapped onto the seafloor, and the way these ocean waves couple into the Earth to create seismic waves," he said.

To make use of the world's lit fiber-optic cables, Lindsey and Ajo-Franklin need to show that they can ping laser pulses through one channel without interfering with other channels in the fiber that carry independent data packets. They're conducting experiments now with lit fibers, while also planning fiber-optic monitoring of seismic events in a geothermal area south of Southern California's Salton Sea, in the Brawley seismic zone. 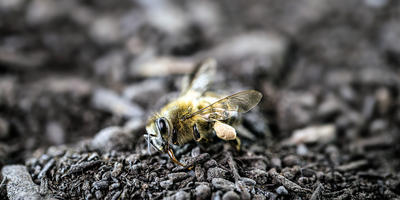 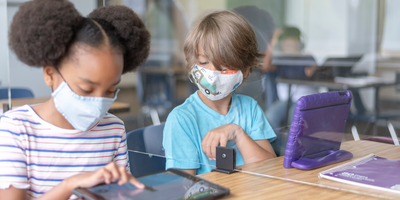 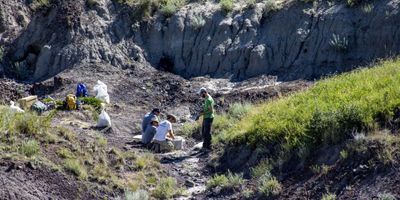