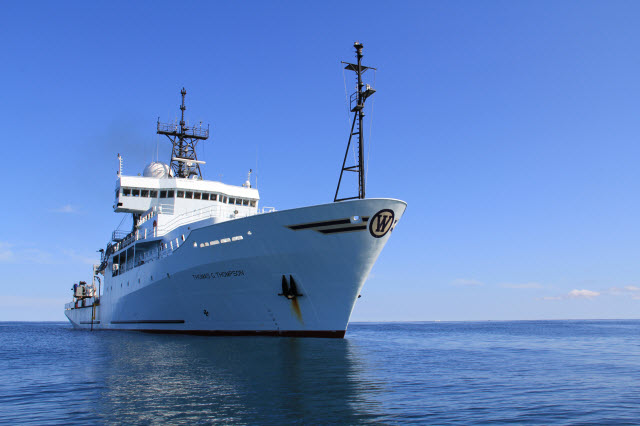 The Thomas G. Thompson has spent a quarter century exploring the world’s oceans.Photo courtesy of the University of Washington

The R/V Thomas G. Thompson, the 274-foot-long research vessel operated by the University of Washington, has spent 25 years carrying researchers, students, and teachers out to sea. The ship has collected material from the bottom of the deepest ocean trenches and braved storms near Antarctica.

The Thomas G. Thompson has spent a quarter century exploring the world’s oceans.

This week, the ship will begin a yearlong stay in protected waters and dry dock near Seattle’s Harbor Island for a complete overhaul of its propulsion system, navigation and many core engineering systems. The $34.5 million project, funded by the U.S. Navy’s Office of Naval Research and the National Science Foundation, will allow the boat, originally intended to operate for 30 years, to continue for another 20 to 25 years.

The bulk of the midlife refit project is a roughly $23 million contract awarded to Seattle’s Vigor Marine LLC. The boat leaves the UW dock Thursday at 9 a.m. to transit to Vigor’s shipyard near downtown Seattle. There the vessel will have its six diesel engines replaced, be outfitted with modern navigation and control systems, and get new plumbing and upgraded heating and ventilation. 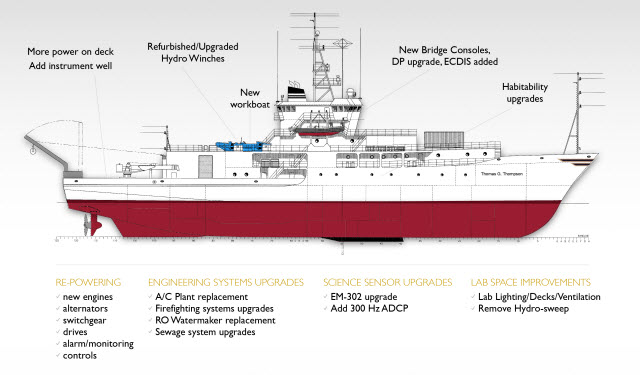 The scope of the work, which will take about a year, includes many of the ship’s core systems.Image credit: University of Washington

The overall project also includes training for the ship’s two captains and crew on the new systems, installing a new lifeboat, replacing the winches that lower instruments into the ocean from the deck, and getting a fresh paint job.

The upgraded and overhauled Tommy Thompson, as the ship is commonly and affectionately known, will use less fuel, produce fewer emissions, and will have the capacity to support new, high-powered ocean instruments. Several local maritime companies will be involved in the work, including Ockerman Automation Consulting of Anacortes and Markey Machinery Co. of Seattle.

“We are extremely proud of the Thompson and her crew. They play such a key role in our research and educational programs,” said Virginia (Ginger) Armbrust, professor and director of the UW’s School of Oceanography. “She was already a fantastic ship to sail on—I can’t wait to see what she’s like in this next phase of her life.”

The Thompson was built in Moss Point, Mississippi, and arrived at the UW in 1991. Named for UW alumnus, professor, chemist, and oceanographer Thomas Gordon Thompson, it was one of three similar vessels built in the 1990s to support U.S. oceanographic research.

The Thompson can accommodate 21 officers and crew, two marine technicians and up to 36 scientists. Designed to carry out research, the ship is optimized for stability, not speed. Its typical cruising speed is just 11 knots, or about 12.5 miles per hour, but it can hold a fixed position to collect observations and lower instruments while at sea.

The ship typically spends 260 to 300 days a year in open water, on trips that can last up to two months.

Over the years, the ship has retrieved the first rock samples from smoking vents on the seafloor, witnessed a submarine volcanic eruption, used robots to explore a deep-ocean trench and carried local teachers to sea. It has even made a rescue or two. The Thompson did most of the installation of a cabled ocean observatory off the Pacific Northwest (the new R/V Sikuliaq will carry out this summer’s maintenance cruise). For its last voyage, the Thompson deployed an ocean robot to watch for harmful algae off Washington’s coast.

The ship is owned by the Office of Naval Research, managed through the University-National Oceanographic Laboratory System and operated by the UW. It is used by researchers from the UW and other institutions who secure research funding and then apply for time aboard the ship.

The Washington legislature also funds 45 days of ship time per year to support undergraduate research and education. UW undergraduates have traveled to the Galapagos Islands, Nootka Sound, and Washington's own Puget Sound. Many also accompany UW faculty on research expeditions. The UW is among a handful of institutions where undergraduates can do research aboard a world-class research vessel.

Between the serious and sometimes round-the-clock work, passengers get to view beautiful vistas and marine wildlife, as well as continue traditions like shrinking heads at sea.

The ship’s namesake, Thomas G. Thompson (1888-1961) was a chemistry professor who founded the UW’s School of Oceanography. He developed ways to measure trace amounts of metals, salts and nutrients in seawater, ultimately exploring how these affect the water’s physical properties. Thompson was born in New York, earned his doctorate in chemistry at the UW in 1918 and joined the UW chemistry faculty in 1919. He founded the UW’s Friday Harbor Laboratories in 1930 and formally established the UW School of Oceanography in 1951.

The R/V Thompson is the first of the three similar major U.S. research vessels built in the same era to get such an overhaul. The Scripps Institution of Oceanography and Woods Hole Oceanographic Institution research vessels will undergo their refits in 2018 and 2020, respectively. The Thompson’s overhaul is expected to be complete by late spring 2017, and the ship is already booked to go back to sea next summer once the work is done.