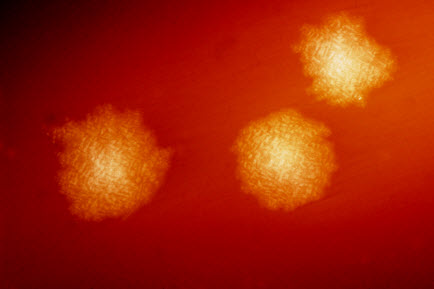 Clostridium difficile colonies after 48 hours growth on a blood agar plate, magnified 4.8x.Dr. Holdeman, Centers for Disease Control and Prevention, via Wikimedia CommonsDetroit – The Wayne State University Eugene Applebaum College of Pharmacy and Health Sciences recently announced that Steven M. Firestine, Ph.D., associate professor of pharmaceutical sciences, is part of a research team awarded more than $3.2 million from the National Institutes of Health’s National Institute of Allergy and Infectious Diseases to prove the effectiveness of a new treatment for Clostridium difficile infection.

One of the most common infections contracted in hospitals, C. difficile is often a cause of disease and death among the elderly in hospitals, nursing homes and extended care facilities. According to the Centers for Disease Control and Prevention, C. difficile is a bacterium that causes diarrhea and more serious intestinal conditions such as colitis. Symptoms include watery diarrhea, fever, loss of appetite, nausea and abdominal pain or tenderness. Risk factors include prolonged use of antibiotics, gastrointestinal tract surgery, hospitalization and colon problems. Patients with C. difficile often have recurrent infections over prolonged periods of time, making treatment of this disease challenging. In the United States alone, there are approximately half a million C. difficile cases annually, with a mortality rate greater than 2.5 percent. The annual costs associated with the disease are estimated at $3.2 billion.

“The infectious form of C. difficile is the spore, a resistant structure that can survive on hospital surfaces for extended periods. Our focus is on the synthesis and evaluation of compounds that prevent the conversion of the spore into a growing bacterium,” said Firestine. “The lead agent has shown remarkable properties in the prevention of this disease, but there are still some issues related to its strength and stability that we need to address. My laboratory will work on creating and combining structures similar to this lead agent. The laboratories of Professors Abel-Santos and Minton will focus on evaluating these compounds.”

The five-year grant for the study “Prophylaxis of Clostridium difficile Infection” began Dec. 1, 2014, and provides researchers with the support needed to extend proof of their principle discoveries demonstrating the usefulness of a novel bile salt in preventing C. difficile spore germination. This form of treatment has not been shown to be viable until the work of this team, which is led by three principal investigators: Firestine, Dr. Ernesto V. Abel-Santos of the University of Nevada Las Vegas and Professor Nigel P. Minton of the University of Nottingham, UK. Funding for work being led by Firestine and his research group in the Eugene Applebaum College of Pharmacy and Health Sciences totals approximately $1.1 million.

“We are excited about the results of our research and are grateful that the NIAID has funded this study,” said Firestine. “Our findings have the potential to address a serious problem, drastically decrease the spread of a dangerous infection, and improve the safety and well-being of hospital patients and residents in nursing homes and extended care facilities.”

Material Protects Against Both Biological and Chemical Threats

Material Protects Against Both Biological and Chemical Threats

Insights into the Main Stages of Pharmaceutical Discovery and Development

Insights into the Main Stages of Pharmaceutical Discovery and Development