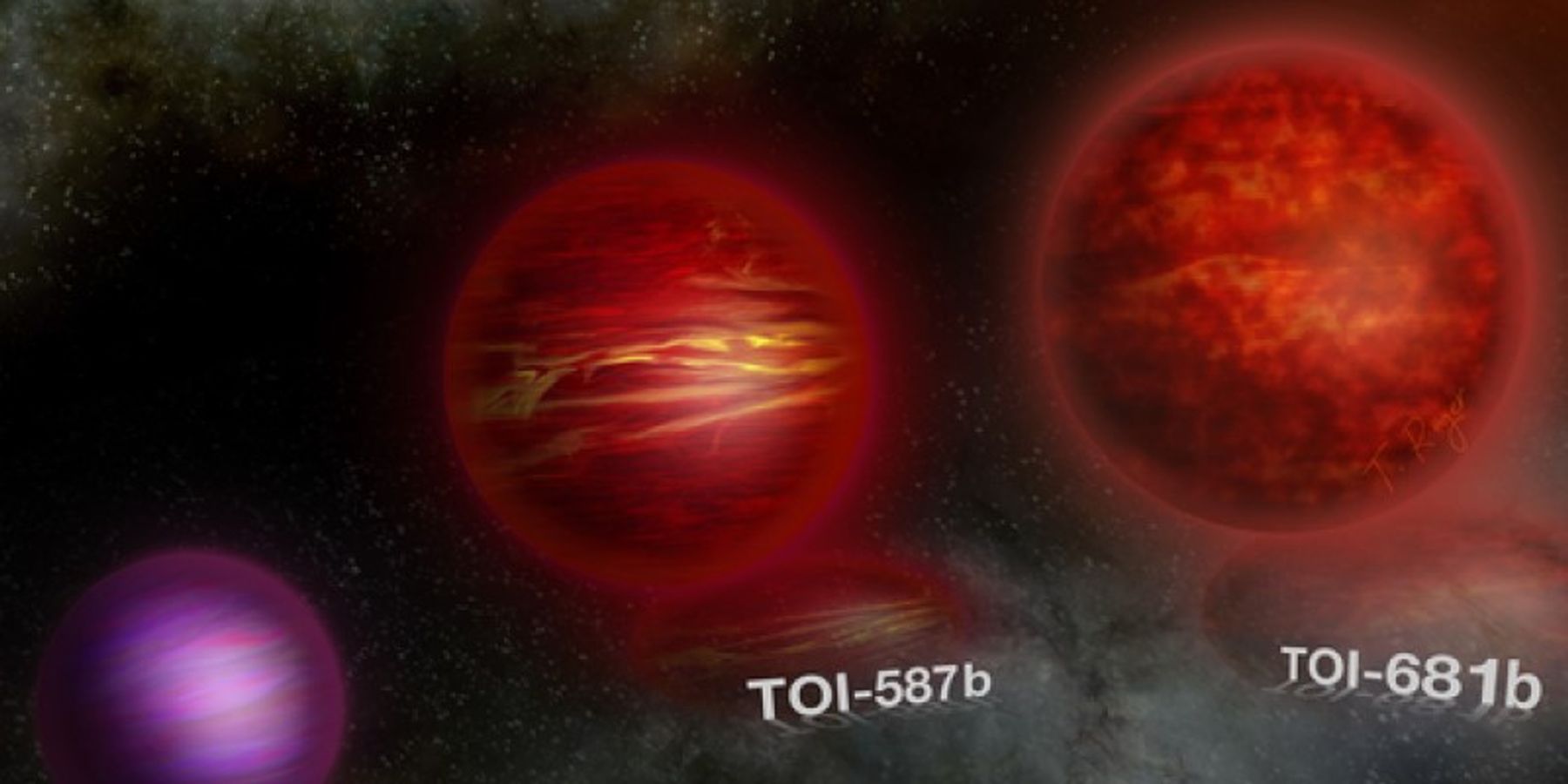 This artist’s illustration represents the brown dwarfs discovered with the satellite TESS. These objects are all in close orbits of 5-27 days (at least 3 times closer than Mercury is to the sun) around their much larger host stars.
Thibaut Roger - UNIGE

Brown dwarfs are astronomical objects with masses between those of planets and stars. The question of where exactly the limits of their mass lie remains a matter of debate, especially since their constitution is very similar to that of low-mass stars. So how do we know whether we are dealing with a brown dwarf or a very low mass star? An international team, led by scientists from the University of Geneva (UNIGE) and the Swiss National Centre of Competence in Research (NCCR) PlanetS, in collaboration with the University of Bern, has identified five objects that have masses near the border separating stars and brown dwarfs that could help scientists understand the nature of these mysterious objects. The results can be found in the journal Astronomy & Astrophysics.

Brown dwarfs, on the other hand, are not massive enough to fuse hydrogen and therefore cannot produce the enormous amount of light and heat of stars. Instead, they fuse relatively small stores of a heavier atomic version of hydrogen: deuterium. This process is less efficient and the light from brown dwarfs is much weaker than that from stars. This is why scientists often refer to them as “failed stars.”

“However, we still do not know exactly where the mass limits of brown dwarfs lie, limits that allow them to be distinguished from low-mass stars that can burn hydrogen for many billions of years, whereas a brown dwarf will have a short burning stage and then a colder life,” points out Nolan Grieves, a researcher in the Department of Astronomy at the UNIGE’s Faculty of Science, a member of the NCCR PlanetS and the study’s first author. “These limits vary depending on the chemical composition of the brown dwarf, for example, or the way it formed, as well as its initial radius,” he explains. To get a better idea of what these mysterious objects are, we need to study examples in detail. But it turns out that they are rather rare. “So far, we have only accurately characterised about 30 brown dwarfs,” says the Geneva-based researcher. Compared to the hundreds of planets that astronomers know in detail, this is very few. All the more so if one considers that their larger size makes brown dwarfs easier to detect than planets.

New pieces to the puzzle

Today, the international team characterized five “companions” that were originally identified with the Transiting Exoplanet Survey Satellite (TESS) as TESS objects of interest (TOI)—TOI-148, TOI-587, TOI-681, TOI-746, and TOI-1213. These are called companions because they orbit their respective host stars. They do so with periods of five to 27 days, have radii between 0.81 and 1.66 times that of Jupiter, and are between 77 and 98 times more massive. This places them on the borderline between brown dwarfs and stars.

These five new objects therefore contain valuable information. “Each new discovery reveals additional clues about the nature of brown dwarfs and gives us a better understanding of how they form and why they are so rare,” says Monika Lendl, a researcher in the Department of Astronomy at the UNIGE and a member of the NCCR PlanetS.

One of the clues the scientists found to show these objects are brown dwarfs is the relationship between their size and age, as explained by François Bouchy, professor at UNIGE and member of the NCCR PlanetS: “Brown dwarfs are supposed to shrink over time as they burn up their deuterium reserves and cool down. Here we found that the two oldest objects, TOI 148 and 746, have a smaller radius, while the two younger companions have larger radii.”

Yet these objects are so close to the limit that they could just as easily be very low-mass stars, and astronomers are still unsure whether they are brown dwarfs. “Even with these additional objects, we still lack the numbers to draw definitive conclusions about the differences between brown dwarfs and low-mass stars. Further studies are needed to find out more,” concludes Grieves.