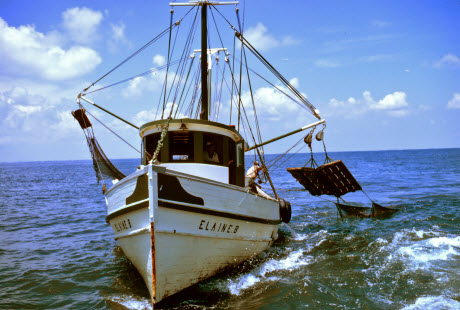 Double-rigged shrimp trawler hauling in its nets.Photo credit: NOAA, via Wikimedia CommonsOverfishing is one among many environmental problems that scientists expect to be exacerbated by climate change. A new study by the Institute of Environmental Science and Technology of the Universitat Autònoma de Barcelona (ICTA-UAB) published today (Mar. 27) in Nature Communications confirms that climate change poses a major threat for the global fishery, but shows that the continual improvement of fishing technology could pose an even greater threat.

Scientific study of large-scale environmental problems, such as global fishery, is often divided between the natural scientists, who study the physical, chemical, or biological aspects, and social scientists, who study the human dimension. The new study includes both natural and social aspects, interacting together over time, connected within the structure of a general circulation model (GCM). This allowed the authors to calculate how climatic, economic, and technological factors add up at the global scale, when viewed over many decades.

"Environmental problems are always complicated," according to ICTA-UAB researcher and lead author Eric Galbraith. "This can make it hard to see, from a local perspective, what is predictable about them, and what it's going to mean for people in the long run. As a result, people often either panic, or just decide to ignore the problems. Our approach focuses on the things we can predict reasonably well, and takes on a global perspective, so that we can see past local details."

The research uses a new biophysical ecosystem model, based on simple metabolic principles and meticulously constrained with records of fish harvests provided by governments around the world. Fishing activity is calculated to happen wherever there are enough fish to be harvested profitably, according to the price that fishermen receive for the fish, and the cost of running fishing operations. The success of fishing operations at catching fish depends on the technology the fishermen are using.

"When we assembled all the equations for the model, and compared it to the data, it jumped out at us that advances in fishing technology were the best way to explain the historical 20th-century increase in fish catches," said study co-author David Carozza, at the University of Quebec in Montreal. "The historical fish prices were remarkably stable, so they were unlikely to do it, but prior research has shown there was a huge improvement in the efficiency of fishing."

The result of steadily improving technology on global fishery reproduces a story that is well known to the managers of individual fisheries. First, catches increase, as fishermen extract more and more of the available fish. But at some point the remaining fish population becomes so small that they can no longer reproduce themselves as fast as they are being caught, so the fish catch reaches a peak, and starts to decline. From that point on, the fishery is stuck with too many fishermen and fishing boats—accumulated during the good years—so that, combined with continually increasing technology, the fishery is driven into collapse.

"The global fishery is simply the sum of many individual fisheries, and our results suggest that we may have recently passed the corresponding peak in global catch," says co-author Daniele Bianchi, at the University of California, Los Angeles. "So, although there are a number of local exceptions, the big picture is that further improvements in fishing technology will mean less wild seafood for people to eat—without continued improvements in the regulation of fisheries."

The study is the first to evaluate the impact that future increases in technology could have on fishing at the global scale. "Many people are aware that technology was a big factor in fisheries collapse in the past, but it's not at the forefront of discussions about future risk," said Galbraith. "However there's no reason to think that people are going to suddenly stop innovating, or that existing technologies are going to stop spreading to the parts of the world they've not yet reached. So it seems pretty likely that the historical trend will continue."

The news isn't all bad. The study also shows that, even with the worst-case CO2 emissions scenario, global fish catches could be maintained at about present levels over the 21st century, if over-fishing can be halted. "New technologies are a double-edged sword," said Galbraith. "Yes, they can make things worse by allowing us to catch too much. But at the same time, things like satellite-based tracking of fishing boats, and genetic tracing of fish, have the potential to help regulation. It's a continual challenge for society to control the potential for destruction that arises from new technologies, and put them to constructive use." 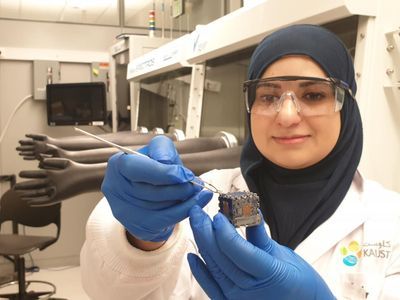