Since 1983, the bacteria Pantoea ananatis has been known to infect several important crops including onions, rice, and corn. It was unclear, however, what molecules were involved. A new study, published in mBio, has identified one of the culprits: pantaphos. Intriguingly, the researchers have discovered that pantaphos can also act as an herbicide and it is toxic to glioblastoma cells, making it an exciting candidate for agricultural and biomedical applications.

"Herbicide resistant weeds are an issue in agriculture," said William Metcalf (MMG leader), a professor of microbiology. "Unfortunately, there hasn't been a new class of herbicide for over 30 years. If we can understand how pantaphos causes onion rot, we can solve a big problem."

Scientists at Cornell University had previously compared the disease-causing strains of P. ananatis to other innocuous strains. They identified a group of genes, designated as hvr, that were responsible for causing onion rot. The researchers in the current paper were inspired by these studies, and they subsequently identified which molecules were produced by these genes and found pantaphos.

"We can inject onions with purified pantaphos and cause onion rot. The injected onions start rotting, and become gross and mushy. It was exciting to see," said Alexander Polidore, a PhD student in the Metcalf lab. "Additionally, bacteria that cannot synthesize this molecule cannot cause onion rot, which means that it is necessary to cause the infection." 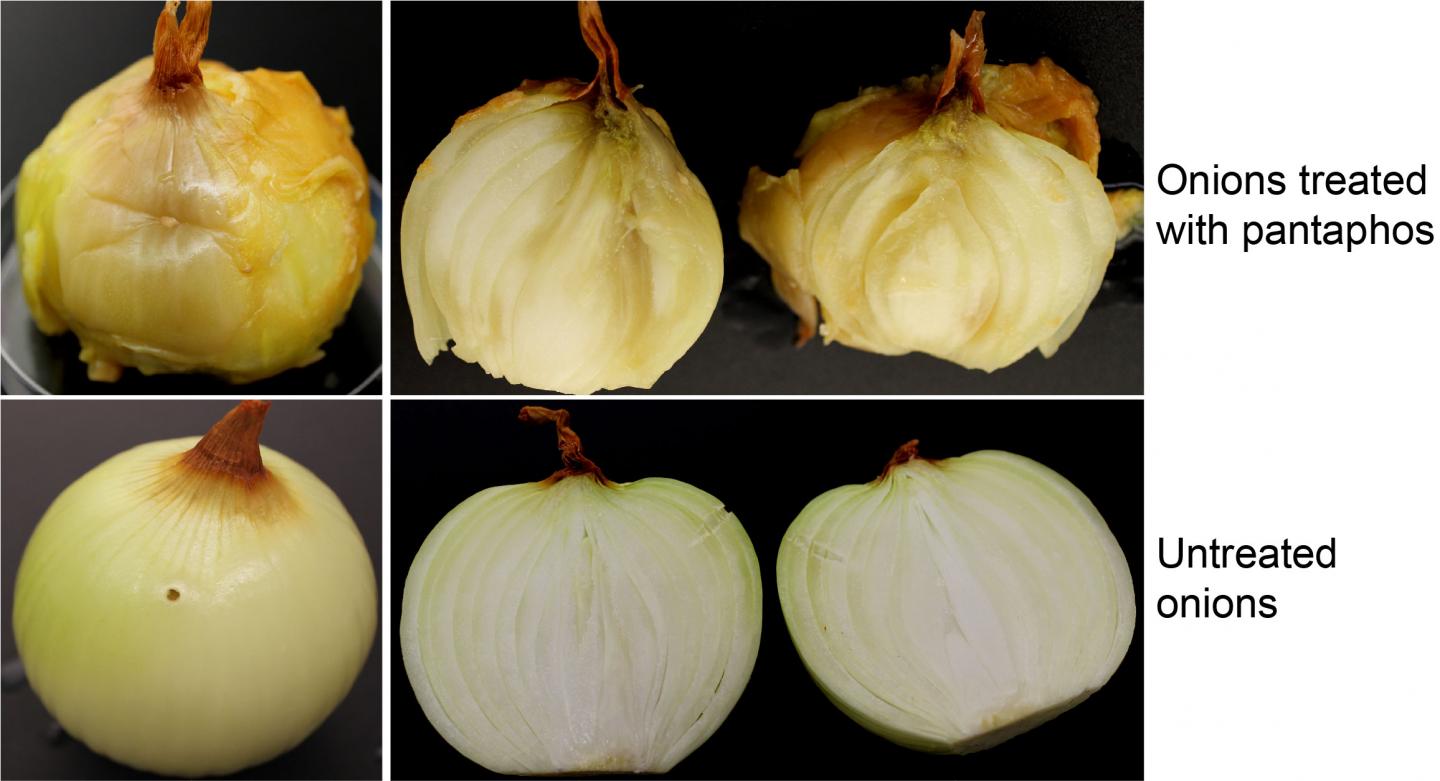 Pantaphos, which is produced by the plant pathogen Pantoea ananatis, is responsible for causing onion center rot.
Alex Polidore

"If we can fully understand how pantaphos is made by the bacteria, we can identify multiple steps of intervention. If we can stop any one of those processes, we can get rid of onion rot," Metcalf said.

Intriguingly, pantaphos has also shown promise as an effective herbicide. "I compared pentaphos to Liberty and Roundup, which are common herbicides, and it was just as good—or even better—against typical weeds such as mustard seedlings," Polidore said.

An important requirement for an herbicide is that it kills weeds, but remains non-toxic to other animals, including humans. Therefore, the researchers tested the toxicity of pantaphos against other organisms. "Although it does not affect other bacteria and fungi, we found that it is moderately toxic to normal human cell lines, but strikingly toxic to glioblastoma cell lines. We were excited because those cancer cells are notoriously hard to kill," Polidore said.

Although pantaphos is somewhat toxic to human cell lines, it is possible that it will not be toxic to whole animals. "If you feed pantaphos to a mouse and it doesn't get taken up in the intestine, it will be much less toxic," Metcalf said. "Thus, our cell line studies are preliminary and will require follow-up experiments to define the level of toxicity in humans."

The researchers are currently trying to understand how pantaphos kills weeds and glioblastoma cells. The results of those studies may help them design modified versions of the molecule that affect only the desirable targets. Using bioinformatic analysis, they have also found similar hvr genes in other bacteria, indicating that there may be several pantaphos-like molecules that could be used as potential herbicides or therapeutic drugs.

- This press release was originally published on the Illinois IGB website. It has been edited for style