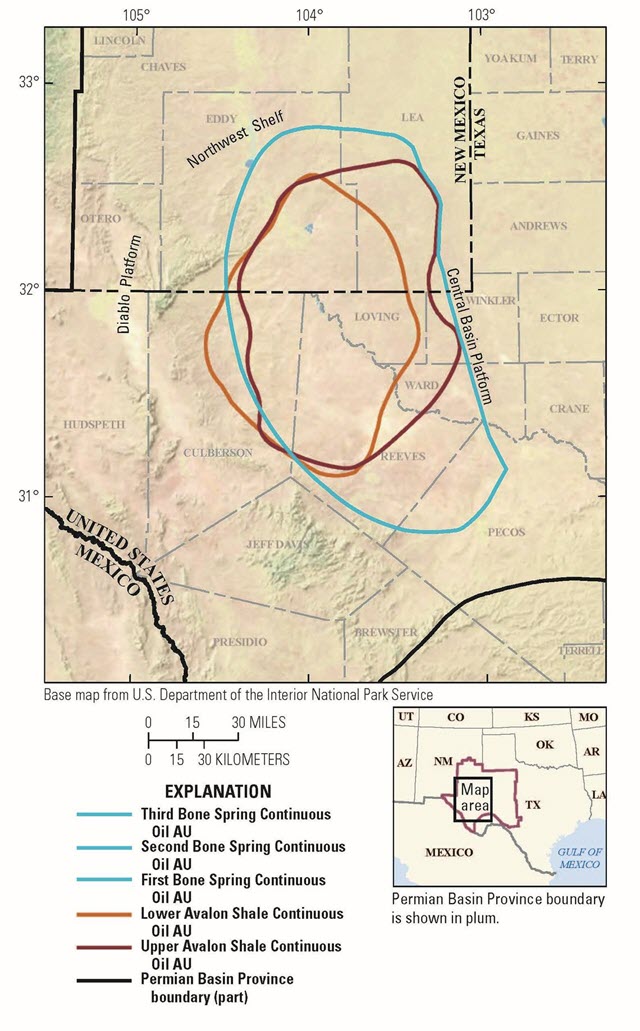 The U.S. Department of the Interior announced the Wolfcamp Shale and overlying Bone Spring Formation in the Delaware Basin portion of Texas and New Mexico’s Permian Basin province contain an estimated mean of 46.3 billion barrels of oil, 281 trillion cubic feet of natural gas, and 20 billion barrels of natural gas liquids, according to an assessment by the U.S. Geological Survey (USGS). This estimate is for continuous (unconventional) oil, and consists of undiscovered, technically recoverable resources.

"Christmas came a few weeks early this year," said U.S. Secretary of the Interior Ryan Zinke. "American strength flows from American energy, and as it turns out, we have a lot of American energy. Before this assessment came down, I was bullish on oil and gas production in the United States. Now, I know for a fact that American energy dominance is within our grasp as a nation."

“In the 1980’s, during my time in the petroleum industry, the Permian and similar mature basins were not considered viable for producing large new recoverable resources. Today, thanks to advances in technology, the Permian Basin continues to impress in terms of resource potential. The results of this most recent assessment and that of the Wolfcamp Formation in the Midland Basin in 2016 are our largest continuous oil and gas assessments ever released,” said Dr. Jim Reilly, USGS Director. “Knowing where these resources are located and how much exists is crucial to ensuring both our energy independence and energy dominance.”

Although the USGS has previously assessed conventional oil and gas resources in the Permian Basin province, this is the first assessment of continuous resources in the Wolfcamp shale and Bone Spring Formation in the Delaware Basin portion of the Permian. Oil and gas companies are currently producing oil here using both traditional vertical well technology and horizontal drilling and hydraulic fracturing.

The Wolfcamp shale in the Midland Basin portion of the Permian Basin province was assessed separately in 2016, and at that time it was the largest assessment of continuous oil conducted by the USGS. The Delaware Basin assessment of the Wolfcamp Shale and Bone Spring Formation is more than two times larger than that of the Midland Basin. The Permian Basin province includes a series of basins and other geologic formations in West Texas and southern New Mexico. It is one of the most productive areas for oil and gas in the entire United States.

“The results we’ve released today demonstrate the impact that improved technologies such as hydraulic fracturing and directional drilling have had on increasing the estimates of undiscovered, technically recoverable continuous (i.e., unconventional) resources,” said Walter Guidroz, Program Coordinator of the USGS Energy Resources Program.

The new assessment of the Delaware Basin Wolfcamp shale may be found online. To find out more about USGS energy assessments and other energy research, please visit the USGS Energy Resources Program website,