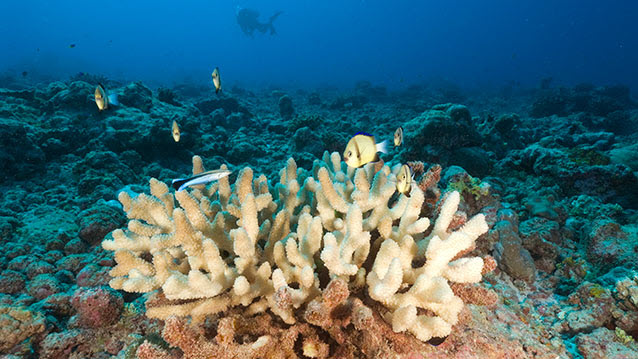 As the world experiences the longest global coral bleaching event ever recorded, Northwestern researchers have developed a “global index” detailing which of the world’s coral species are most susceptible to bleaching and most likely to die. This provides a valuable tool to conservationists, park managers and scientists working with coral reefs.Photo courtesy of Northwestern University

EVANSTON, Ill. – Coral reefs are early casualties of climate change, but not every coral reacts the same way to the stress of ocean warming. Now a Northwestern University research team is the first to provide a quantitative “global index” detailing which of the world’s coral species are most susceptible to coral bleaching and most likely to die.

The world currently is experiencing the longest global coral bleaching event ever recorded, with the Great Barrier Reef and U.S. reefs among those suffering. Bleaching happens when stressed corals expel their life-providing algae, turning coral reefs stark white as their skeletons show through. Some corals rebound, but many do not.

Related Article: On the Forefront of Coral Bleaching Research

The coral bleaching response index was published Apr. 13 as an Early View article by the journal Global Change Biology. Based on a massive amount of historical data, the index can be used to compare the bleaching responses of corals throughout the world and to predict which corals may be most affected by future bleaching events.

“Coral bleaching is an inescapable example of the effects of climate change,” said Timothy D. Swain, the study’s first author and a postdoctoral fellow at the McCormick School of Engineering. “We can see it with our eyes, and we also clearly see the progression of climate change in our data. Our goal is to use data to understand what is driving bleaching and learn how we can protect the world’s coral reefs, so we don’t lose them so quickly.”

Swain is a member of the interdisciplinary research team that analyzed publicly available data on nearly half the world’s corals–including actual measurements of bleaching–to produce the global index. The team was led by molecular biologist Luisa A. Marcelino and included Vadim Backman, both professors at McCormick.

The index provides a valuable new tool to conservationists and park managers committed to preserving coral reefs and scientists interested in learning more about the hundreds of reef-building corals.

“Coral reefs are referred to as rain forests of the sea,” said Marcelino, a research assistant professor of civil and environmental engineering. “They are not rock. Reefs are made of healthy, living animals–individual corals. We want to know why corals are bleaching and why they are bleaching differently.”

Highly productive and diverse ecosystems, coral reefs help support approximately 25 percent of all marine fish species, according to the United Nations Environment Programme. As a result, the livelihoods of 500 million people and income worth more than $30 billion are at risk from coral bleaching.

“In our study, we observed a widely variable bleaching and mortality response among corals,” Marcelino said. “Now, with the index, we have a platform we can use to better understand bleaching mechanisms, both intrinsic and environmental. There is value in knowing which species are more resistant and why. With good tools, we can make more informed decisions and better manage coral reefs.”

Marcelino and Swain also are scientific affiliates with Chicago’s Field Museum of Natural History. There they genetically characterize corals and their symbiont algae and, in collaboration with Chicago’s Shedd Aquarium, expose different corals to thermal stress to better understand mechanisms of differential bleaching.

The global index, representing close to half the world’s corals from 316 sites, is an impressive feat of data science: It emerged from a meta-analysis of all available historical records on coral bleaching from 1982 through 2006–the “sum of human knowledge on species-specific bleaching during this period,” according to Swain.

“Using very large data sets, we have teased out valuable information that will help researchers identify global trends and learn about individual corals,” said co-author Backman, the Walter Dill Scott Professor of Biomedical Engineering. “We want this index to be used to predict how corals might react to future bleaching events.

“This work is a good example of interdisciplinary research,” Backman added. “To make our analysis possible, we applied financial theory conventionally used to predict changes in stock prices in response to stock market variations to model how individual corals react to a change in the environment.”

The research team plans to make the index available online, so that data on corals can be added as it becomes available and make the tool even more robust.

The paper is titled “Coral Bleaching Response Index: A New Tool to Standardize and Compare Susceptibility to Thermal Bleaching.”

In addition to Marcelino, Backman and Swain, other authors of the paper are Jesse B. Vega-Perkins, William K. Oestreich, Conrad Triebold, Emily DuBois and Margaret Siple, of Northwestern; Jillian Henss, of the Field Museum; and Andrew Baird, of the ARC Center of Excellence for Coral Reef Studies, James Cook University, Australia.