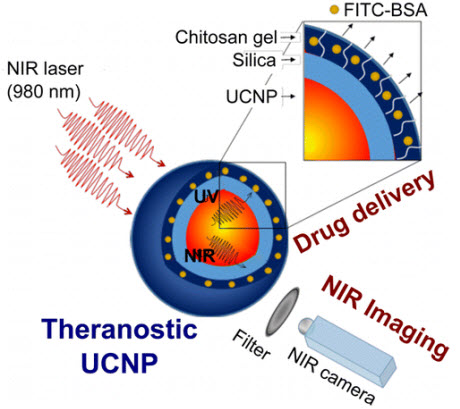 Medical therapies can cause severe side effects, but a new way to deliver drugs could help avoid them.Image courtesy of the American Chemical SocietySome drug regimens, such as those designed to eliminate tumors, are notorious for nasty side effects. Unwanted symptoms are often the result of medicine going where it's not needed and harming healthy cells. To minimize this risk, researchers have developed nanoparticles that only release a drug when exposed to near-infrared light, which doctors could beam onto a specific site. Their report appears in the Journal of the American Chemical Society.

For years, scientists have been striving to develop localized treatments to reduce side effects of therapeutic drugs. They have designed drug-delivery systems that respond to light, temperature, ultrasound and pH changes. One promising approach involved drug-carrying materials that are sensitive to ultraviolet (UV) light. Shining a beam in this part of the light spectrum causes the materials to release their therapeutic cargo. But UV light has major limitations. It can't penetrate body tissues, and it is carcinogenic with repeated exposure. Near-infrared (NIR) light, however, can go through 1 to 2 centimeters of tissue and would be a safer alternative, but photosensitive drug-carriers don't react to it. Marta Cerruti, Fiorenzo Vetrone and colleagues sought to develop a solution that takes advantage of both types of light.

The researchers started with nanoparticles that convert NIR light into UV light and coated them in a UV-sensitive hydrogel shell infused with a fluorescent protein, a stand-in for drug molecules. When exposed to NIR light, the nanoparticles instantaneously converted it to UV, which induced the shell to release the protein payload. The researchers note that their on-demand delivery system could not only supply drug molecules but also agents for imaging and diagnostics.