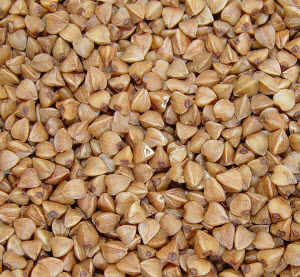 University of Adelaide researchers have developed a novel chemical-free and resistance-free way of protecting stored grain, such as this buckwheat, from insects.Photo credit: Mariluna, Wikimedia CommonsThe researchers are taking advantage of the unique properties of these single-celled algae, called diatoms. Diatoms have been called Nature's nanofabrication factories because of their production of tiny (nanoscale) structures made from silica which have a range of properties of potential interest for nanotechnology.

"One area of our research is focussed on transforming this cheap diatom silica, readily available as a by-product of mining, into valuable nanomaterials for diverse applications - one of which is pest control," says Professor Dusan Losic, ARC Future Fellow in the University's School of Chemical Engineering.

Their research is being presented at this week's ICONN2014-ACMM23 conference for nanoscience and microscopy being hosted by the University of Adelaide at the Adelaide Convention Centre.

"There are two looming issues for the world-wide protection against insect pests of stored grain: firstly, the development of resistance by many species to conventional pest controls - insecticides and the fumigant phosphine - and, secondly, the increasing consumer demand for residue-free grain products and food," Professor Losic says.

"In the case of Australia, we export grain worth about $8 billion each year - about 25 million tonnes - which could be under serious threat. We urgently need to find alternative methods for stored grain protection which are ecologically sound and resistance-free."

The researchers are using a natural, non-toxic silica material based on the 'diatomaceous earths' formed by the fossilisation of diatoms. The material disrupts the insect's protective cuticle, causing the insect to dehydrate.

"This is a natural and non-toxic material with a significant advantage being that, as only a physical mode of action is involved, the insects won't develop resistance," says Professor Losic.

"Equally important is that it is environmentally stable with high insecticidal activity for a long period of time. Therefore, stored products can be protected for longer periods of time without the need for frequent re-application."