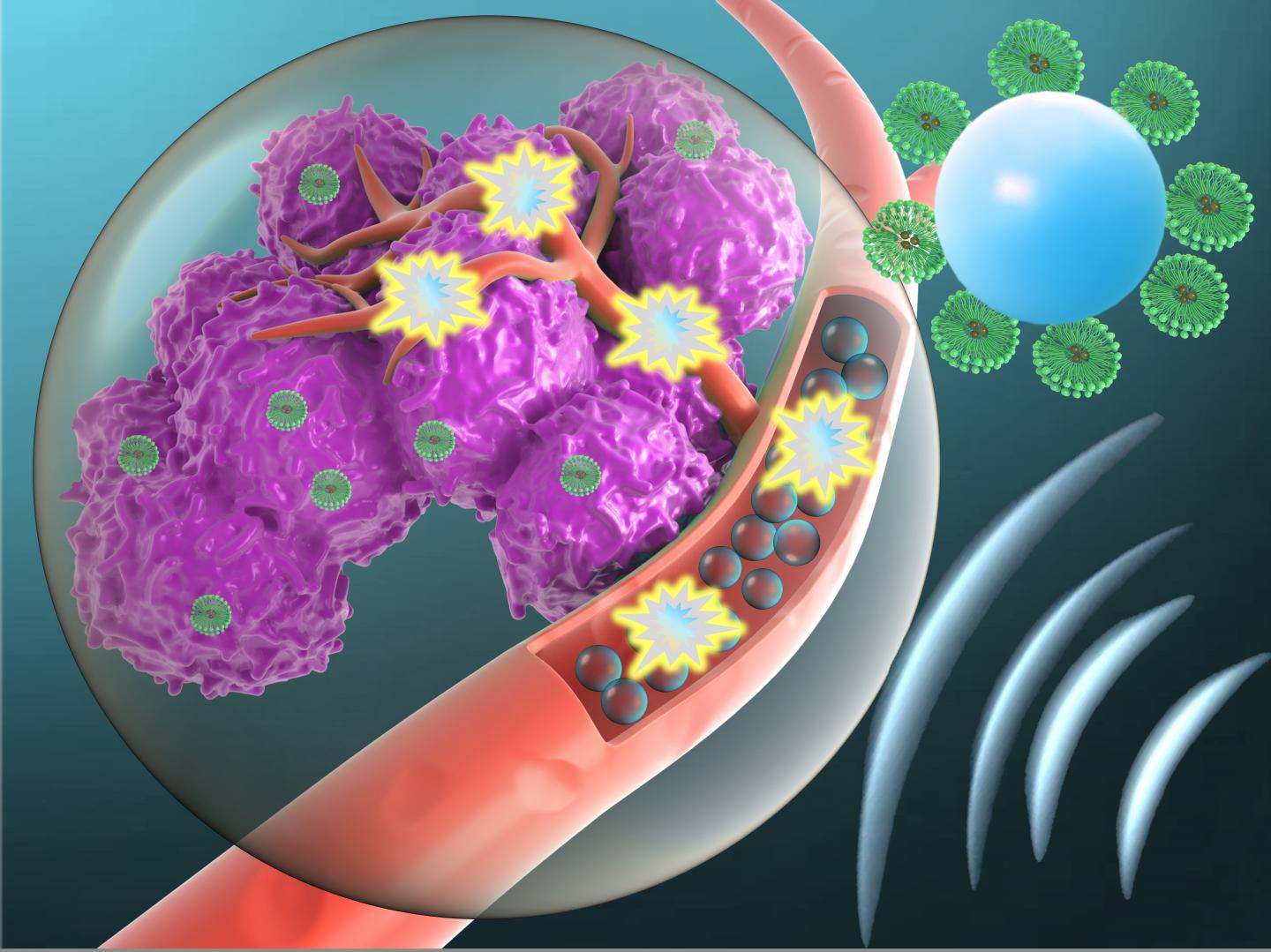 Microbubbles carry the anticancer drug to the site of the tumor. Antibodies attached to the microbubbles are attracted to the growth hormone found around cancer cells. Once in situ, an ultrasound device is used to burst the bubbles, releasing the drug.
Graphic: Dr. Sunjie Ye, University of Leeds/Theranostics

New research has shown how microbubbles carrying powerful cancer drugs can be guided to the site of a tumor using antibodies.

Microbubbles are small manufactured spheres half the size of a red blood cell—and scientists believe they can be used to transport drugs to highly specific locations within the body.

In a paper published in the journal Theranostics, the lead authors of the study, Drs Nicola Ingram and Laura McVeigh from the University of Leeds, describe how they have targeted microbubbles through the use of a "navigational aid"—antibodies attracted to the growth hormone found in high levels in the blood vessels supplying a tumor.

The antibodies were attached to the microbubbles—and as a result of being attracted to the growth hormone, the microbubbles became concentrated at the site of the tumor. A pulse from an ultrasound device was used to burst open the microbubbles, and that released the anti-cancer agent.

Ingram, senior research fellow in the School of Medicine at Leeds, said being able to deliver anticancer drugs in a very targeted fashion would be a major advance in cancer therapy.

She added: "One of the big problems with cancer drugs is that they are highly toxic to the rest of the body too. Microbubble technology allows us to use these very powerful drugs with precision and that reduces the risk of the drug damaging healthy cells nearby. It is about finely focused drug delivery."

The animal-based study also revealed that by attaching the drug directly to the microbubbles allowed it to circulate in the body for longer, increasing delivery into the tumor—in effect, making the drug more potent.

As a result, the scientists were able to slow cancer growth with a much smaller drug dose.

Professor Stephen Evans, head of the Molecular and Nanoscale Physics Group at Leeds and one of the paper's authors, said: "The results of this study are exciting because we not only show the very precise and targeted way microbubbles can be guided to cancer sites but that the efficacy of drug delivery is substantially improved, opening the way to use highly toxic drugs to fight cancer, without the harmful side effects. Put simply: you get more bang for your buck."

The next stage of the research is to look at using microbubbles to develop targeted, triggered, delivery systems in patients for the diagnosis and treatment of advanced colorectal cancer, the third most common cancer in the UK.

This project is a very encouraging example of exploring how using an advanced drug delivery technology could improve biodistribution, targeting, and efficacy of a potentially toxic therapeutic."

This study involved a research team from the universities of Leeds, Bradford, Manchester, and the Medicines Discovery Catapult in Cheshire. The study and a follow-on study were funded by the Engineering and Physical Sciences Research Council. In addition, several PhD students are also developing microbubbles for treatment of other diseases and have been funded by Alumni.

The University of Leeds has established the Leeds Microbubble Consortium, a group of cancer scientists, engineers, physicists, and chemists to develop ways microbubble technology could enhance cancer treatment.

- This press release was originally published on the University of Leeds website. It has been edited for style