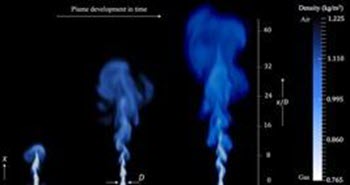 Dr. Kiran Bhaganagar plume dispersal model shows the trajectory of toxic gas in the air with the goal to alert residents of how long they have during an evacuationCREDIT: Suddher BhimiReddy and Kiran BhaganagarIt was morning in Khan Sheikhoun, a small rural town in the north of Syria. Residents went about their lives when up above jets crossed the skies. Suddenly, a deadly plume of sarin gas descended upon the people. The mortal cloud spread about six miles wide and asphyxiated more than 80 residents while injuring close to 600 more.

On that day, April 4, 2017, that town became known as the site of the most violent chemical attack in recent history. And while many in the international community were horrified by the incident, a group of UTSA researchers wasted no time to learn how to protect others from a similar fate.

Kiran Bhaganagar, a mechanical engineering professor at The University of Texas at San Antonio, and her team from the Laboratory of Turbulence Sensing and Intelligence Systems, developed numerical models to replicate the dispersal of the toxic gas. Their initial work was first published in the journal Natural Hazards and improved approaches were made available online in March 2018 ahead of peer-review and publication this month in Atmospheric Pollution.

Bhanagar's work shows how with limited information, accurate projections of the trajectory of deadly gases can be made.

"If there is a sudden a chemical attack, questions that are important are 'how far does it go' and 'what direction does it go,'" Bhaganagar said. "This is critical for evacuations." Bhaganagar's research was supported by the U.S. Army Edgewood Chemical Biological Center (ECBC), who hope to adopt her models to assist in the case of an attack on American soil.

Plume dispersion, the spreading of chemicals in the air, is due to turbulence and depends on a variety of factors: atmospheric heating or cooling of the surface; wind gradient which refers to the speed or direction of the wind; and whether a chemical is lighter or heavier than the air. Moreover, all of these factors lead to notable differences in how chemicals travel by time of day and seasons.

"In the nighttime and early morning, even when you have calm winds, the gradients are very sharp, which means chemicals travel faster," Bhaganagar explains.

To predict the effects of turbulence on the dispersal of chemical particles, Bhaganagar's team developed and ran computer simulations on the Stampede2 supercomputer at the Texas Advanced Computing Center (TACC), the largest system at any U.S. university.

"In Syria, it was very bad because the timing caused it to be ideal conditions to spread very fast," she said. "We ran the actual case of Syria on the TACC supercomputer, got all of the background information and added it to the models, and our models captured the boundaries of the plume and which cities it spread to. We saw it was very similar to what was reported in the news. That gave us confidence that our system works and that we could use it as an evacuation tool."