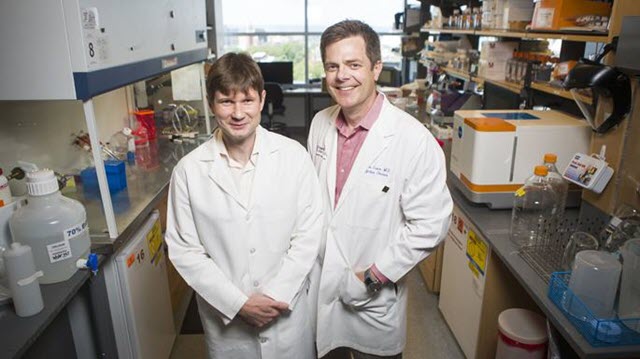 Researchers at Vanderbilt University Medical Center and their colleagues are a step closer to developing a broadly effective antibody treatment against the three major Ebola viruses that cause lethal disease in humans.

Reporting July 17 in the journal Immunity, they describe the isolation of two potent monoclonal antibodies from human survivors of Ebola virus disease that, in cell culture studies, efficiently neutralized the Zaire, Sudan and Bundibugyo ebolaviruses.

The antibodies, EBOV-515 and EBOV-520, also showed the capacity to protect against infection by these viruses in animal models.

While further study is needed, these antibodies could lead to development of injectable antibody "cocktails" for people at high risk of being infected by Ebola viruses. The hope is that the antibodies—like heat-seeking missiles—would seek out and destroy the viruses before they can wreak havoc in the body.

"Our team was very excited to discover these new antibodies that have the capacity to treat all ebolaviruses," said the paper's senior author, James Crowe Jr., MD, director of the Vanderbilt Vaccine Center. "They appear very promising for development as a treatment and prevention for Ebola virus disease."

Crowe is the Ann Scott Carell Professor in the Departments of Pediatrics and Pathology, Microbiology and Immunology in the Vanderbilt University School of Medicine. The paper's first author, Pavlo Gilchuk, PhD, is a senior staff scientist in Crowe's lab.

Ebola virus disease, which was first reported in Central Africa in 1976, can cause massive bleeding. The death rate is about 50 percent. The virus is spread by contact with contaminated body fluids, including blood and semen.

A major outbreak in West Africa claimed more than 11,000 lives between 2014 and 2016. Earlier this month the World Health Organization reported 29 deaths from a smaller outbreak that began in April in the Democratic Republic of the Congo.

For several years Crowe and his colleagues have been studying the immune responses of people who have survived Ebola virus disease.

His lab has developed high-efficiency methods that can quickly isolate antibody-producing white blood cells from survivor blood samples and then fuse them to fast-growing myeloma (cancer) cells. In this way the researchers can produce large quantities of antibodies that target specific viruses.

In the current study, plasma was obtained from survivors of Ebola virus disease outbreaks in the Congo and West Africa. Monoclonal antibodies were generated from the white blood cells of two survivors that showed the highest activity against the three Ebola viruses.