Vast amounts of valuable energy, agricultural nutrients, and water could potentially be recovered from the world's fast-rising volume of municipal wastewater, according to a new study by UN University's Canadian-based Institute for Water, Environment and Health (UNU-INWEH). 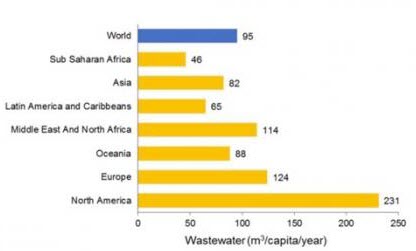 Furthermore, the paper says, wastewater volumes are increasing quickly, with a projected rise of roughly 24 percent by 2030, 51 percent by 2050.

Today, the volume of wastewater roughly equals the annual discharge from the Ganges River in India. By the mid-2030s, it will roughly equal the annual volume flowing through the St. Lawrence River, which drains North America's five Great Lakes.

Beyond the economic gains of recovering these nutrients are critical environmental benefits such as minimizing eutrophication—the phenomenon of excess nutrients in a body of water causing dense plant growth and aquatic animal deaths due to lack of oxygen.

The energy embedded in wastewater, meanwhile, could provide electricity to 158 million households—roughly the number of households in the USA and Mexico combined.

The study's estimates and projections are based on theoretical amounts of water, nutrients, and energy that exist in the reported municipal wastewater produced worldwide annually.

Related Article: Study: How US Sewage Plants Can Remove Medicines from Wastewater

The authors underline that information on wastewater volumes—generated, available, and reused—is scattered, infrequently monitored and reported, or unavailable in many countries. They also acknowledge the limitations of current resource recovery opportunities.

Nonetheless, says lead author Manzoor Qadir, assistant director of UNU-INWEH, in Hamilton, Canada: "This study offers important insights into the global and regional potential of wastewater as a source of water, nutrients, and energy. Wastewater resource recovery will need to overcome a range of constraints to achieve a high rate of return but success would significantly advance progress against the Sustainable Development Goals and others, including adaptation to climate change, 'net-zero' energy processes, and a green, circular economy." 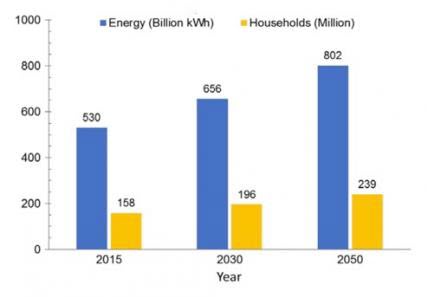 Current potential of wastewater for energy production and projections for the years 2030 and 2050 based on anticipated increases in wastewater volumes.
UN University Institute for Water, Environment and Health

The paper cites prior research showing that human urine is responsible for 80 percent of the nitrogen and 50 percent of phosphorus entering municipal wastewater treatment plants. "Removing these nutrients in time would not only be environmentally beneficial," the paper says, "resulting in less eutrophication, it would reduce the cost of wastewater treatment while supporting closed-loop processes."

Current wastewater nutrient recovery technologies have made significant progress. In the case of phosphorous, recovery rates range from 25 to 90 percent.

The paper points out that maximizing economically the potential use of thermal energy in wastewater swings on several basic requirements, including a minimum flow rate of 15 liters per second, short distances between heat source and sink, and high-performance heat pumps.

Says Vladimir Smakhtin, director of UNU-INWEH, a global leader in research related to unconventional water sources: "Municipal wastewater was and often still is seen as filth. However, attitudes are changing with the growing recognition that enormous potential economic returns and other environmental benefits are available as we improve the recovery of the water, nutrients and energy from wastewater streams."

- This press release was originally published on the UNU-INWEH website