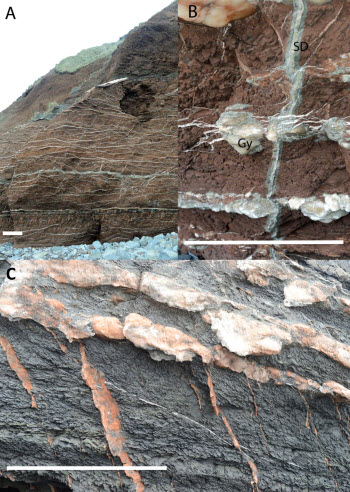 Watchet Bay cliff outcrops on the N. Somerset coast, UK (51°10'59"N, 3°20'10.7"W). These outcrops consist of Upper Triassic sediments from the Mercia Mudstone Group thought to have formed in a mixed floodplain and playa origin environment (Talbot et al. [12]). A) This cliff outcrop contains nodular sulfate and clay mixtures toward the base (arrowed) and pure gypsum veins in the mid part of the cliff. Cliff height 30 m. Scale bar is 1 m. B) White gypsum veins derived by partial dissolution of sulfate-rich deposits formed by near-surface evaporation. SD sandstone dyke, Gy and clay gypsum nodule. Scale bar is 0.5 m. C) Pure gypsum veins (some with orange coloration) in gray mudstone member of Watchet Triassic mudstone. Scale bar is 0.25 m.Images courtesy of the University of LeicesterMineral veins found in Mars’s Gale Crater were formed by the evaporation of ancient Martian lakes, a new study has shown.

The research, by Mars Science Laboratory Participating Scientists at The Open University and the University of Leicester, used the Mars Curiosity rover to explore Yellowknife Bay in Gale Crater on Mars, examining the mineralogy of veins that were paths for groundwater in mudstones.

The study suggests that the veins formed as the sediments from the ancient lake were buried, heated to about 50 degrees Celsius and corroded.

Professor John Bridges from the University of Leicester Department of Physics and Astronomy said: “The taste of this Martian groundwater would be rather unpleasant, with about 20 times the content of sulphate and sodium than bottled mineral water for instance!

“However as Dr Schwenzer from The Open University concludes, some microbes on Earth do like sulphur and iron rich fluids, because they can use those two elements to gain energy. Therefore, for the question of habitability at Gale Crater the taste of the water is very exciting news."

The researchers suggest that evaporation of ancient lakes in the Yellowknife Bay would have led to the formation of silica and sulphate-rich deposits.

Subsequent dissolution by groundwater of these deposits—which the team predict are present in the Gale Crater sedimentary succession—led to the formation of pure sulphate veins within the Yellowknife Bay mudstone.

The study predicts the original precipitate was likely gypsum, which dehydrated during the lake’s burial.

Related Article: Gusev Crater Once Held a Lake After All, says Mars Scientist

The team compared the Gale Crater waters with fluids modeled for Martian meteorites shergottites, nakhlites and the ancient meteorite ALH 84001, as well as rocks analyzed by the Mars Exploration rovers and with terrestrial ground and surface waters.

The aqueous solution present during sediment alteration associated with mineral vein formation at Gale Crater was found to be high in sodium, potassium and silicon, but had low magnesium, iron, and aluminium concentrations and had a near neutral to alkaline pH level.

The mudstones with sulphate veins in the Gale Crater were also found to be close in composition to rocks in Watchet Bay in North Devon, highlighting a terrestrial analogue which supports the model of dissolution of a mixed silica and sulphate-rich shallow horizon to form pure sulphate veins.

Ashwin Vasavada, Curiosity Project Scientist from the NASA Jet Propulsion Laboratory said: “These results provide further evidence for the long and varied history of water in Gale Crater. Multiple generations of fluids, each with a unique chemistry, must have been present to account for what we find in the rock record today.”