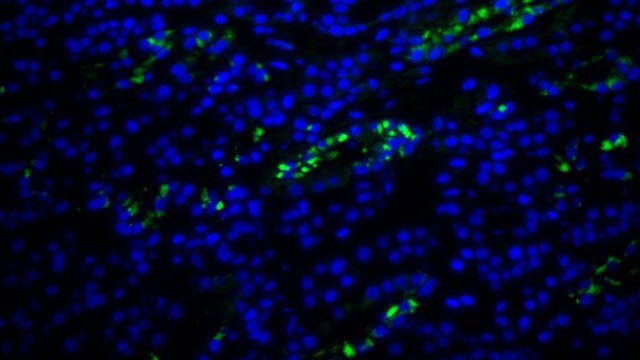 Human herpesvirus 6 (HHV-6) infects almost all of the human population, but only very few will show any symptoms during their lifetime. Between 95 and 100 percent of healthy adults have antibodies to the virus, which means that they have been infected at some point in the past.

The virus hides in the genomic DNA

There are two types of the virus: HHV-6A and HHV-6B. HHV-6B primarily infects in infancy as sixth disease, whereas HHV-6A infections usually remain asymptomatic. After primary infection, the virus establishes lifelong latency by integrating with the cellular DNA.

The infection is generally harmless. Under certain circumstances, however, the virus can be reactivated—for example, after chlamydia infection, organ transplantation, immunodeficiency, or when taking specific drugs.

While HHV-6 was long believed to have no negative impact on human health, scientists today increasingly suspect the virus of causing various diseases such as multiple sclerosis or chronic fatigue syndrome. Recent studies even suggest that HHV-6 might play a role in the pathogenesis of several diseases of the central nervous system such as schizophrenia, bipolar disorder, depression, or Alzheimer's.

Dr. Bhupesh Prusty is responsible for these new insights. The scientist is a team leader at the Department of Microbiology of the University of Würzburg. Prusty has recently discovered a method which for the first time allows reactivation of human herpesvirus to be detected at an early stage.

"Betaherpesviruses like human herpesvirus 6A, 6B and 7 integrate into subtelomeric ends of human chromosomes and acquire latency. This makes it difficult to recognize the early phase of viral activation based on an analysis of the viral DNA," Prusty points out the problem. Together with his team, the virologist has now discovered an alternative approach which could be a suitable biomarker for HHV-6 studies.

"We have identified several viral microRNA molecules which are produced both during active infection and viral activation," Prusty explains. MicroRNAs directly influence cell metabolism. The RNA assures the flow of genetic information from nuclear DNA into the cell where it is "translated" to proteins. The microRNAs have a regulatory function in this process. They can dock to RNA molecules and prevent them from being translated to proteins or initiate the degradation of RNA molecules. Prusty is certain that the detection of these viral microRNAs can serve as an ideal biomarker under clinical conditions.

The scientists were able to confirm their hypothesis by studying biopsies of a young woman who had died tragically as a result of drug-induced hypersensitivity syndrome (DRESS), a usually life-threatening condition that results in rash, organ failure, and blood count anomalies.

Scientists have suspected for some time that these cases might have been caused by drugs that activate viruses but were unable to provide evidence for this theory. Prusty and his colleagues have now detected traces of HHV-6 DNA in the blood of the deceased, however different concentrations at various stages of the disease. At the time of death, for example, the viral load was very low while the opposite was true for the concentration of microRNA: "All biopsy samples showed a positive signal for this special type of RNA," Bhupesh Prusty says. This indicates the potential effectiveness of RNA as a viral biomarker for the detection of active viral infection in the body.

With this finding, Prusty and his team have demonstrated for the first time in experiments that some of the prescription drugs have the potential to reactivate HHV-6 with life-threatening consequences. Early detection of viral reactivation may therefore be helpful for further clinical interventions.