Excessive weight around our middle gives our brain’s resident immune cells heavy exposure to a signal that turns them against us, setting in motion a crescendo of inflammation that damages cognition, scientists say.

It’s known this visceral adiposity, characterized by an apple-shaped physique, is considered particularly bad for our bodies and brains.

But Medical College of Georgia scientists have shown for the first time one way visceral fat is bad for brains is by enabling easy, excessive access for the proinflammatory protein signal interleukin-1 beta, they report in The Journal of Clinical Investigation.

“We have moved beyond correlations saying there is a lot of visceral fat here, and there is cognitive decline here so they may be interacting with each other,” says Dr. Alexis M. Stranahan, neuroscientist in the MCG Department of Neuroscience and Regenerative Medicine at Augusta University.

“We have identified a specific signal that is generated in visceral fat, released into the blood that gets through the blood brain barrier and into the brain where it activates microglia and impairs cognition.” 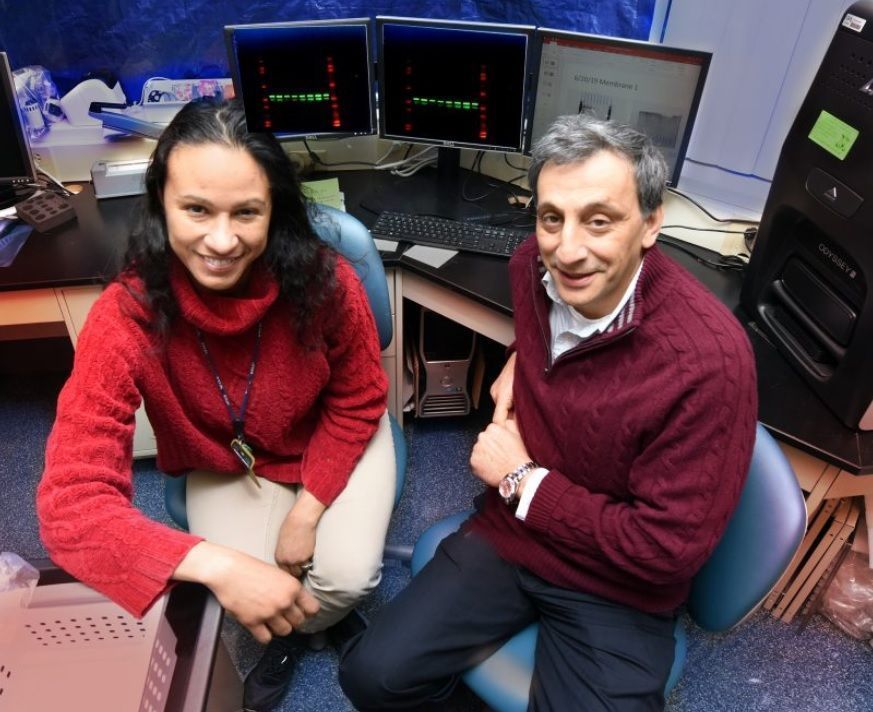 The brain typically does not see much of this interleukin-1 beta, but Stranahan and her colleagues have found that visceral adiposity generates high, chronic levels of the signal that in turn over-activate the usually protective microglia, the resident immune cells in our brain.

To explore brain effects, the scientists knocked NLRP3 out of mice and found the mice were protected against obesity-induced inflammation of the brain and the cognitive problems that can result. They also transplanted visceral adipose tissue from obese mice and obese mice missing NLRP3 into lean mice recipients and found the transplant from the NLRP3 knockout mouse had essentially no effect.

But the transplant from the obese but genetically intact mice increased levels of interleukin-1 beta in the hippocampus, a center of learning and memory in the brain, and impaired cognition.

They looked further and found that just transplanting the visceral fat caused essentially the same impact as obesity resulting from a high-fat diet, including significantly increasing brain levels of interleukin-1 beta and activating microglia. Mice missing interleukin-1 beta’s receptor on the microglia also were protected from these brain ravages.

Their findings enabled the scientists to start putting together the pieces that NLRP3 was working through interleukin-1 beta, which led them to also knock out the receptor for interleukin-1 beta on microglia and confirm that action in the brain.

Microglia typically function as watchdogs, constantly surveilling and roaming the brain, eliminating dead cells and other debris as well as a myriad of other tasks like forming and pruning connections between neurons. Microglia also have receptors for interleukin-1 beta, and the protein, whose many actions include promoting inflammation, easily passes through the protective blood brain barrier.

Microglia’s helpful—or harmful—actions likely result from signals they are exposed to, and another thing interleukin-1 beta appears to do is prompt microglia to wrap around synapses, possibly exerting damaging pressure and/or releasing substances that actually interfere with conversations between neurons, Stranahan says. In the absence of disease, microglia also are known to embrace synapses but to release good things like brain-derived neurotrophic factor, which is like fertilizer for these invaluable connections.

Happy microglia also have long processes that enable them to reach out and do their many tasks; and inflammation retracts those processes. The scientists found much shorter processes and less complex microglia in mice on a high-fat diet, more changes that didn’t happen when NLRP3 was knocked out.

To measure cognitive ability, the scientists looked at mice’s ability to navigate a water maze after 12 weeks on a high- or low-fat diet. They found it took the normal, or wild type, mice consuming the higher fat diet as well as the visceral transplant recipients with NLRP3 intact longer to negotiate the water maze. In fact, while they could reach a platform they could see, they had trouble finding one beneath the water’s surface that they had been taught to find.  Mice with the interleukin-1 receptor knocked out, could find it just fine, Stranahan says.

The high-fat diet, transplant mice also had weaker connections, or synapses, between neurons involved in learning and memory. Mice on a high-fat diet but missing NLRP3 were spared these changes, like mice on a low-fat diet.

Also, like many of us, mice tend to prefer new toys and those on a low-fat diet or with NLRP3 removed were better at recognizing novel objects to play with and their synapses were stronger.  The high-fat diet transplant mice seemed not to remember so well which toy they’d already played with.

There is already potential protection out there from brain effects, Stranahan says, noting biologics in use in humans for problems like rheumatoid arthritis and Crohn’s disease, that target interleukin-1 beta. “Obesity-induced inflammation occurs over years and so does inflammation in some of these chronic inflammatory diseases,” Stranahan says.

There are many hypotheses about why visceral fat is so inflamed, including its proximity to the gut microbiota, a centerpiece of our immune response, which is programmed to attack invaders.

Increased rates of cognitive decline have been linked to obesity in humans, including shrinkage of key brain areas like the hippocampus, although there also have been contradicting reports about the overall health impact of obesity, the scientists report.

The contradiction in impact may relate to where the fat is found, says Stranahan, whose next goals include studying the apparent protective effects of fat deposited under the skin, called subcutaneous fat, whose benefits may include allowing you to store energy away from the highly inflammatory abdominal area.

Waist to hip ratio is a better indicator of visceral adiposity than the standard body mass index, or BMI, that divides weight by height.

The research was funded by the National Institutes of Health. Read the full study.

- This press release originally appeared on the Augusta University website.