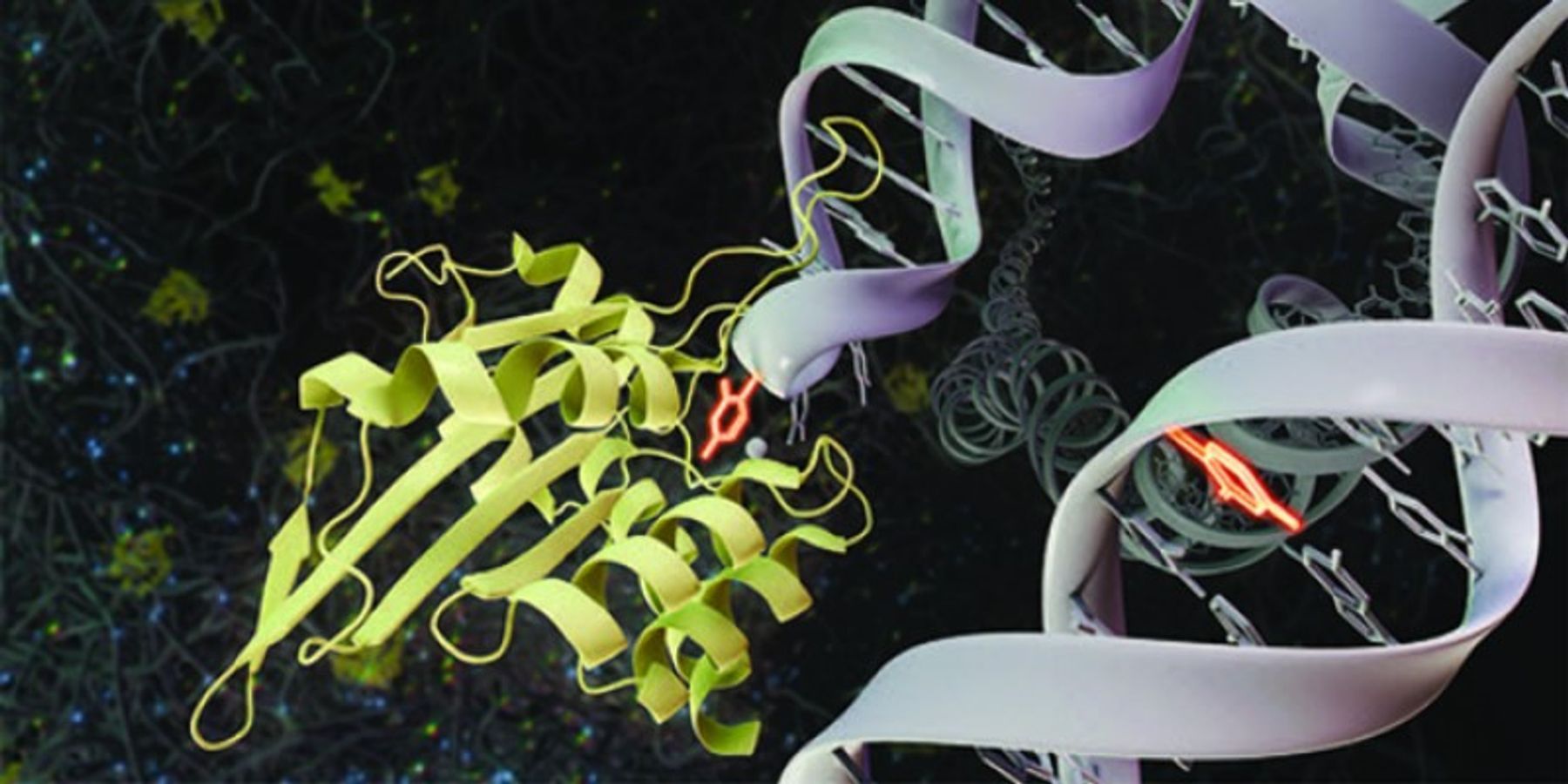 This image depicts the APOBEC3A enzyme (yellow) attacking a DNA (white) to promote the deamination of the cytosine (bright orange) generating DNA mutations in the genome of the cell.
UCI School of Medicine

IRVINE, CA — A new study led by University of California, Irvine (UCI) researchers identifies two ways in which APOBEC3A—a vital enzyme that is responsible for genetic changes resulting in a variety of cancers while protecting our cells against viral infection—is controlled.

The enzyme APOBEC3A is a vital part of the innate immune system that works to protect cells from viral infection by inducing mutations to block viruses from replicating. However, APOBEC3A also induces mutations by directly attacking the genome of cancer cells, which results in increased levels of DNA mutations that lead to cancer progression, metastasis, and drug resistance.

“In our previous studies, we demonstrated that APOBEC3A-induced DNA mutations are very frequent in cancer patients. In fact, we found they are present in up to 80 percent of certain cancer types such as lung, breast, or bladder cancers,” said Rémi Buisson, PhD, assistant professor in the UCI School of Medicine Department of Biological Chemistry.

In this study, graduate student Sunwoo Oh and Elodie Bournique, PhD, a postdoctoral fellow, both at UCI School of Medicine, characterized how both viral infection and genotoxic stress caused by chemotherapeutic drugs transiently up-regulate APOBEC3A.  Their work illustrates how viral infection triggers a specific innate immune response to activate APOBEC3A expression in human cells and how it is an important step in the elimination of the virus. Their work also illustrates how different chemotherapeutic drugs stimulate APOBEC3A, but through a completely different type of immune response which, this time, causes mutations that further enhance cancer aggressivity.

“Together, our results reveal different ways for the cells to regulate APOBEC3A expression to address different types of stresses that the cell may encounter,” said Buisson. “By understanding how cancer cells and viral infections regulate APOBEC3A expression, we are poised to take critical step forward toward the development of both new therapeutic strategies to fight cancer and new anti-viral therapies.”

More work is needed to develop strategies to prevent the formation of DNA mutations caused by APOBEC3A in the cancer genome that increase tumor heterogeneity, promoting disease progression and resistance to therapies. With regard to viral infections, the next step is to determine whether certain types of mutations previously detected in viruses such as SARS-CoV-2 (COVID-19) are the result of APOBEC3A activity and affect the replication of the virus in the cells.

- This press release was provided by the University of California, Irvine