May 29, 2015|4 min readUniversity of North Carolina at Charlotte 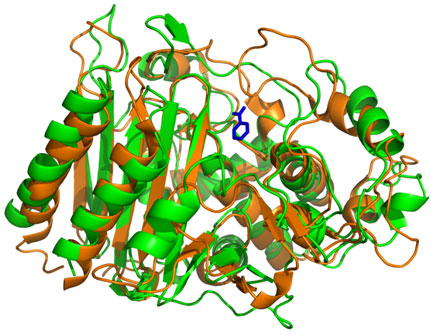 The researchers find that all four molecules are remarkably similar in having a rigid protein superstructure, but with three “flexible” structural elements at the active site – the part of the enzyme that acts on the antibiotic. The analysis shows that the flexible structures are “cooperatively correlated” in their motions – the movements of the molecular segments are linked and the linkage is similar in all four molecules analyzed.

The researchers say that the unusual close similarity of the dynamical properties – the way the coupled dynamics within the active site loops is been preserved by the evolutionary process in four different bacterial groups – and the fact that the conserved correlated flexibility happens at the active site implies that this specific structural feature is critical to its advanced antibacterial properties.

“From an evolutionary perspective, this is really cool,” Livesay said. “Here’s a protein that has a very intense set of evolutionary pressures on it, making these couplings critical and not allowing them to vary. We’ve never seen that before. Typically these couplings are quite variable, even when they are otherwise closely related enzymes.”

“Clearly this result is important because it is at the active site, because it is evolutionarily conserved, and because we have never seen this degree of  conservation in any other system before,” Livesay noted.

The analysis was done using the Distance Constraint Model (DCM), a protein analysis program developed by Livesay and UNC Charlotte biophysicist Donald Jacobs that allows relatively detailed but also relatively streamlined comparison of the properties and behaviors of complex protein structures based on their sequence of amino acids.

The DCM’s efficient but accurate structural analysis allowed the researchers to make complex structural comparisons between many different (but related) protein molecules in realistic computing timescales that would be inaccessible by traditional methods. The DCM allows researchers to quickly and accurately pinpoint specific differences in dynamical properties between the structures, such as differing amounts of rigidity/flexibility in specific parts of the protein’s complex structure.

In a previous study using the DCM to analyze a related class of beta-lactamase enzymes, Livesay and Jacobs found evolutionary changes in the structure of the enzyme had no relation to the specific antibiotics the enzyme was effective in dismantling.  The researchers, however, did find that the overall structure of these class A beta-lactamase enzymes was unusually rigid.

The overall stability of the beta-lactamase protein, the authors of the previous study suspected, allowed changes in the components of the active site to evolve easily and rapidly because most changes there would not disrupt the more general characteristics of the protein.  Beta-lactamase’s ability to almost endlessly evolve the structure of its active site without other consequences perhaps accounts for beta-lactamase’s ability to rapidly evolve in response to new antibiotics.

The earlier finding was discouraging for medicine because it meant that there were probably few (if any) opportunities to disable class A enzymes by bonding small molecules to the proteins and changing their enzymatic activity through allosteric effects – the active site was apparently unaffected by changes in other parts of the protein structure. However, the current finding regarding the linked, flexible structural components of class-C beta lactamases may be a very different story.

“We have strong evidence from our past research that allostery – dynamic connections between different structural components in a large molecule – is very sensitive to disruption,” Livesay noted. “And we have seen here that these coupled elements at class C active sites are highly conserved by evolution, probably for a good reason related to function. If you were able to disrupt that coupling, there is a good likelihood that you would have a nice therapeutic effect.”

While his lab does not do drug discovery, Livesay says the finding points to where labs that do such research ought to look.

“From a therapeutic point of view, you can imagine that if you could create a small molecule that bound to the active site somewhere else, it could decouple active site loop dynamics, and you would disable something vital to the enzyme,” he said.

Livesay’s lab continues to work on analyzing other classes of beta-lactamase in the hope that understanding the complex structural dynamics of the enzyme will reveal its functional limits and its weaknesses. Paraphrasing a famous quote by Theodosius Dobzhansky regarding evolution, Livesay remarked: “Nothing in biology makes sense except in the light ofbiophysics.”

The paper is available online at http://dx.plos.org/10.1371/journal.pone.0125832 Jenna Brown, the first author on the paper, won best Natural Sciences and Public Health poster at UNC Charlotte’s 2014 Summer Research Symposium and first place in the Bioinformatics division at the 2015 Undergraduate Research Conference for her presentations of this work.