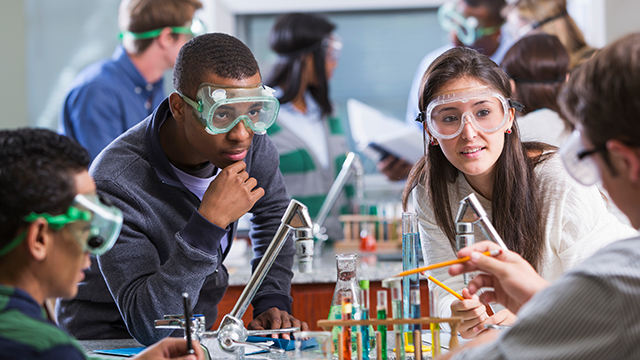 Ninety-nine percent of science, technology, engineering, and math (STEM) jobs in the US require some form of postsecondary education. Yet, degree holders in science and engineering fields remain predominantly white and male. This results in the exclusion of a large portion of the US workforce which consists of 29 percent underrepresented minorities—46.9 percent women and 16.9 percent immigrants—from participating in these high-paying, high-growth fields.

According to German A. Cadenas, an assistant professor of counseling psychology at Lehigh University's College of Education, systemic obstacles exist for women, minorities, and immigrants in STEM, as evidenced by low representation and education attainment gaps. There have been many efforts to close the STEM education gap in K-12, at universities and at the graduate level. However, much is still unknown about how to reach students attending community colleges. Community colleges enroll about one third of all postsecondary students and very significant portions of all underrepresented groups.

That is why Cadenas and his colleagues at Arizona State University created Poder, a five-week social entrepreneurship program with a focus on technology, and implemented it through one of the largest community college systems in the US. Poder, which means "to be able" in Spanish, aims to instill entrepreneurial and technology skills in underrepresented groups: women, minorities, and immigrants. Key to the curriculum is engaging marginalized students in critical consciousness—an awareness of the impact of social and political forces—to address systemic oppression as they pursue educational and vocational pathways in entrepreneurial and STEM disciplines.

After a rigorous analysis of the data—the results of several years of the program operating at five community college campuses in the Southwestern region—the team found that Poder students experienced large increases in their confidence as entrepreneurs and in their readiness to use technology. The results, based on data from 106 student participants, are described in a paper, "A programmatic intervention to promote entrepreneurial self-efficacy, critical behavior, and technology readiness among underrepresented college students," published in the Journal of Vocational Behavior. Additional authors include Elizabeth Angelica Cantu; of Arizona State University, Scottsdale; Tameka Spence and Alissa Ruth, both of Arizona State University, Tempe; and, Nathalie Lynn, a graduate student in Lehigh's counseling psychology program.

Poder is supported by grant funding from the Cisco corporate advised fund at Silicon Valley Community Foundation. At the end of each free, five-week Poder program, students are eligible to apply to compete in a live pitch event competition for an opportunity to win seed funding for their business venture. The Cisco-sponsored competition aims to help reduce the barrier of limited funding opportunities for entrepreneurs who are women and/or people of color.

Although each college has some flexibility in setting up the logistics of their program, Poder consists of at least 30 hours of education, where 15 hours consist of attending in-person facilitated training sessions and 15 hours focus on completing self-paced online modules, customer discovery interviews, and attending meetings with a mentor. Using an introductory lesson adapted from Cisco's Networking Academy curriculum, students learned about the Internet of Things (IoT). This type of technology was presented to students as a tool to maximize their social venture's impact.

The authors write: "Students in the program are prompted to reflect on systemic issues impacting their communities, and facilitators lead dialogues that promote collective critical reflection about these issues, and their intersection with students' cultural identities. Students then apply what they are learning in the program to design a social venture that addresses a community issue, thus having the opportunity to move from critical reflection to critical behavior and civic participation..."

"Our study supports the idea that culturally-responsive teaching that focuses on critical consciousness is an effective way of engaging communities that face marginalization in education related to STEM entrepreneurship," says Cadenas. "Using this type of culturally-responsive education more broadly, and paired with other systemic interventions, could play a major role in helping close achievement and skills gaps in STEM and entrepreneurial fields."

Related Article: The Challenges and Triumphs for Women in Science Today

"It's quite encouraging to see the students' gains from a relatively short program," says Alissa Ruth, co-author of the study and Director of Strategic Initiatives School of Human Evolution and Social Change. "Our research shows that the thoughtfully designed curriculum, backed by scientific evidence, along with a support system of educators, mentors, and program staff have direct impacts to students' lives. We hope that our research encourages others to implement similar programs in order to help address inequities faced by historically underrepresented students in these fields."

The team also found that the students' skills increases were not limited to a particular race/ethnicity, gender, or immigration status, as students benefited equally from the Poder curriculum.

In a companion study, described in an article "Integrating critical consciousness and technology in entrepreneurship career development with diverse community college students" and published in the Journal of Career Development last year, the authors analyzed information gleaned from in-person interviews of 36 student participants. Seventy-seven of the participants were students of color. Women comprised 44 percent of the sample. The researchers found similar results with students displaying "high expectations for entrepreneurship careers that leveraged technology to promote social change, as well as high expectations to persist through graduation and/or transfer to a four-year university."

The authors also report that after participating in Poder, 97 percent of the students interviewed expressed commitment to persisting through graduation at the community college, and 64 percent had goals of continuing their education at a four-year university to gain skills and advance their entrepreneurial projects.

The majority of students they interviewed displayed an increased awareness of privileges and barriers related to aspects of their identities as well as how these may play a role in their career development.

As an example, the paper includes a quote from Everette, a 20-year old biracial female whose entrepreneurial project was "an inclusive, multipurpose lemonade shop": "I've had a lot of experience with basically hitting glass ceilings. I've always been right below an owner and at this point in my life, I think that I have enough experience to be one...so I might as well work for myself because I've worked really hard for a lot of other people."

Cadenas and his colleagues report that the interviews revealed that Poder helped students feel more prepared to be entrepreneurs and provided them with a general sense of "entrepreneurial self-efficacy." They also note that some students described experiencing an "evolution: from having no real experience with entrepreneurship to ending the program with a developed project.

The authors write that most of the students they interviewed did not start the program with ideas for social ventures that would integrate technology. But by the end, many were motivated to make technology an integral part of their venture to facilitate its growth and potential. They include a student quote exemplifying this theme:

"In the beginning, when I had told our instructor in the class my idea, they didn't have too much technology involved. It was more my initial venture was to let people get away from technology and just be a part of nature. When they told me that (how IoT technology works) I was like oh, okay, I need to reevaluate this."

Another example came from Jake, a 22-year-old Native American male whose venture was a tourism agency, who said: "How can I have technology involved in my company to better not only the company but the customers, pretty much everything else. Definitely helps in the end."

"I think that communities who face social oppression every day, who have less access to quality education, who do not have as many opportunities to tap into their creativity and develop entrepreneurial skills with support and guidance, I think these are the communities that can benefit the most from these types of educational programs," says Cadenas. "Education leaders at community colleges, universities, schools, and industry could also benefit from adopting culturally-responsive programs such as ours in order to support students' learning in a way that is meaningful to them and their communities."