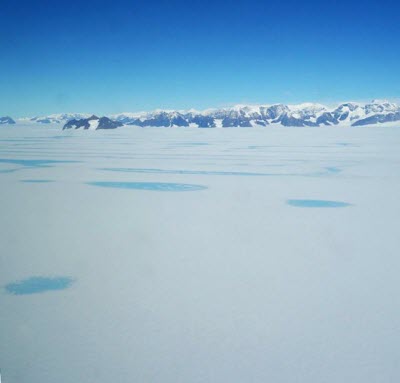 This image shows meltwater pools on the Larsen C ice shelf in Antarctica.Photo credit: Jenny Turton (British Antarctic Survey)New research describes for the first time the role that warm, dry winds play in influencing the behavior of Antarctic ice shelves. Presenting this week at a European conference scientists from British Antarctic Survey (BAS) explain how spring and summer winds, known as föhn winds, are prevalent on the Larsen C Ice Shelf, West Antarctica, and creating melt pools. The Larsen C Ice Shelf is of particular interest to scientists because it of the collapse of Larsen A in 1995 and Larsen B in 2002.

The researchers observed the föhn winds, which blow around 65 percent of the spring and summer period, extend further south and are more frequent than previously thought, and are likely to be a contributing factor that weakens ice shelves before a collapse. The results are presented this week (Tuesday 25 April) at the European Geosciences Union General Assembly (EGU) in Vienna.

In 1995 and 2002, the Larsen A and B ice shelves collapsed, depositing an area the size of Shropshire into the Weddell Sea. Whilst ice shelf collapse doesn't directly contribute to sea level rise, the glaciers which fed into the ice shelves accelerated, leading to the loss of land ice, and subsequently indirect sea level rise. The processes responsible for the collapse of these ice shelves were largely debated, and it is now thought that crevasses on the ice shelf were widened and deepened by water draining into the cracks. Föhn winds are thought to be responsible for melting the ice shelf surface and supplying the water.

Related Article: West Antarctic Ice Shelf Breaking up from the inside Out

The findings describe when and where the warm, dry winds occur over the Larsen C Ice Shelf, the largest remaining ice shelf on the Antarctic Peninsula (roughly the size of Wales). Föhn winds were measured from near-surface weather stations and regional climate model data over a five year period and observed all year-round, but were most frequent in spring.

"What's new and surprising from this study is that föhn winds occur around 65 percent of the time during the spring and summer. And we didn't know how much they influence the creation of melt pools and therefore are likely to weaken the ice shelf. Whilst a high number occur in spring, the combined warming over a number of days leads to much more surface melting than was experienced during days without föhn winds. This is important, as melting during summer and re-freezing during winter weakens the ice surface, and makes it more at risk of melting again the following season.

"We know the ice shelf often melts a little during summer, however we have found that when föhn events occur as early as September (three months earlier than the start of the summer melt season), the ice shelf surface is melting. Now that we know how prevalent and spatially extensive these winds are, we can look further into the effect they are having on the ice shelf." 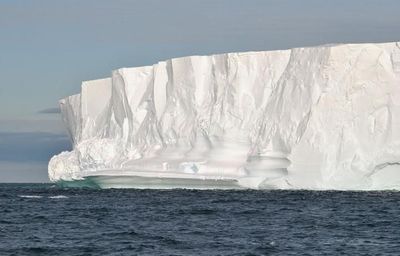 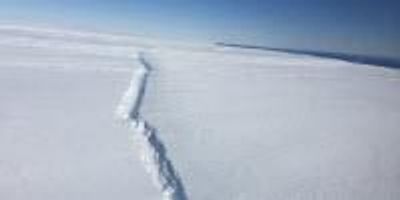 West Antarctic Ice Shelf Breaking up from the inside Out

West Antarctic Ice Shelf Breaking up from the inside Out