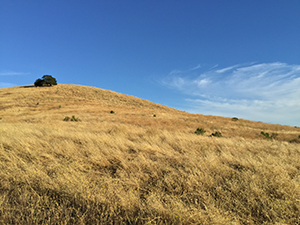 Dry grassland and oak landscape of central California's Coastal Mountain Range, among the parts of the state most affected by the current drought. Photo taken August 2015.Photo credit: Dominick McPeakeA new study says that global warming has measurably worsened the ongoing California drought. While scientists largely agree that natural weather variations have caused a lack of rain, an emerging consensus says that rising temperatures may be making things worse by driving moisture from plants and soil into the air. The new study is the first to estimate how much worse: as much as a quarter. The findings suggest that within a few decades, continually increasing temperatures and resulting moisture losses will push California into even more persistent aridity. The study appears this week in the journal Geophysical Research Letters.

"A lot of people think that the amount of rain that falls out the sky is the only thing that matters," said lead author A. Park Williams, a bioclimatologist at Columbia University's Lamont-Doherty Earth Observatory. "But warming changes the baseline amount of water that's available to us, because it sends water back into the sky."

The study adds to growing evidence that climate change is already bringing extreme weather to some regions. California is the world's eighth-largest economy, ahead of most countries, but many scientists think that the nice weather it is famous for may now be in the process of going away. The record-breaking drought is now in its fourth year; it is drying up wells, affecting major produce growers and feeding wildfires now sweeping over vast areas.

The researchers analyzed multiple sets of month-by-month data from 1901 to 2014. They looked at precipitation, temperature, humidity, wind and other factors. They could find no long-term rainfall trend. But average temperatures have been creeping up—about 2.5 degrees Fahrenheit over the 114-year period, in step with building fossil-fuel emissions. Natural weather variations have made California unusually hot over the last several years; added to this was the background trend. Thus, when rainfall declined in 2012, the air sucked already scant moisture from soil, trees and crops harder than ever. The study did not look directly at snow, but in the past, gradual melting of the high-mountain winter snowpack has helped water the lowlands in warm months. Now, melting has accelerated, or the snowpack has not formed at all, helping make warm months even dryer according to other researchers.

Due to the complexity of the data, the scientists could put only a range, not a single number, on the proportion of the drought caused by global warming. The paper estimates 8 to 27 percent, but Williams said that somewhere in the middle–probably 15 to 20 percent–is most likely. 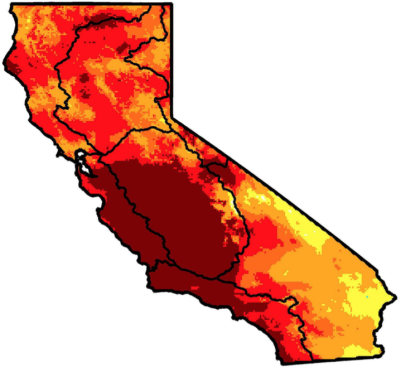 Severity of the California drought in 2014, a record-breaking year. The darkest red areas are the worst.Image credit: Williams et al., Geophysical Research Letters, 2015Last year, the U.S. National Oceanic and Atmospheric Administration sponsored a study that blamed the rain deficit on a persistent ridge of high-pressure air over the northeast Pacific, which has been blocking moisture-laden ocean air from reaching land. Lamont-Doherty climatologist Richard Seager, who led that study (and coauthored the new one), said the blockage probably has nothing to do with global warming; normal weather patterns will eventually push away the obstacle, and rainfall will return. In fact, most projections say that warming will eventually increase California's rainfall a bit. But the new study says that evaporation will overpower any increase in rain, and then some. This means that by around the 2060s, more or less permanent drought will set in, interrupted only by the rainiest years. More intense rainfall is expected to come in short bursts, then disappear.

Many researchers believe that rain will resume as early as this winter. "When this happens, the danger is that it will lull people into thinking that everything is now OK, back to normal," said Williams. "But as time goes on, precipitation will be less able to make up for the intensified warmth. People will have to adapt to a new normal."

This study is not the first to make such assertions, but it is the most specific. A paper by scientists from Lamont-Doherty and Cornell University, published this February, warned that climate change will push much of the central and western United States into the driest period for at least 1,000 years. A March study out of Stanford University said that California droughts have been intensified by higher temperatures, and gives similar warnings for the future. 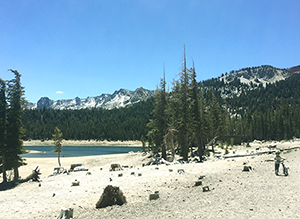 Abnormally low lake level at Horseshoe Lake in the high-elevation Mammoth Lakes Basin of the Sierra Nevada Mountains. Taken June 2015.Photo credit: Jennifer BernsteinA further twist was introduced in a 2010 study by researchers at the NASA Goddard Institute for Space Studies. They showed that massive irrigation from underground aquifers has been offsetting global warming in some areas, because the water cools the air. The effect has been especially sharp in California's heavily irrigated Central Valley—possibly up to 3.5 degrees Fahrenheit during some seasons. Now, aquifers are dropping fast, sending irrigation on a downward trajectory. If irrigation's cooling effect declines, this will boost air temperatures even higher, which will dry aquifers further, and so on. Scientists call this process "positive feedback."

Climatologist Noah Diffenbaugh, who led the earlier Stanford research, said the new study is an important step forward. It has "brought together the most comprehensive set of data for the current drought," he said. "It supports the previous work showing that temperature makes it harder for drought to break, and increases the long-term risk."

Jonathan Overpeck, co-director of the Institute of the Environment at the University of Arizona, said, "It's important to have quantitative estimates of how much human-caused warming is already making droughts more severe." But, he said, "it's troubling to know that human influence will continue to make droughts more severe until greenhouse gas emissions are cut back in a big way."

The study's other authors are Richard Seager, Jason Smerdon, Benjamin Cook and Edward Cook, all of Lamont-Doherty Earth Observatory; and geographer John Abatzoglou of the University of Idaho.