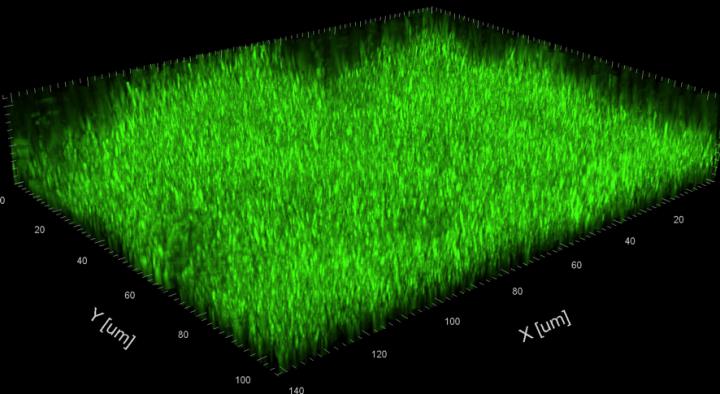 Confocal image of a typicalmature biofilm taken at 12 h. The bacteria are labeled with the DNA stain DAPI but are shown here in green for clarity.
University of Tsukuba

TSUKUBA, JAPAN — Lurking inside pipes and on the surfaces of indwelling medical devices, slimy layers of bacteria, called biofilms, cause problems ranging from largescale product contamination to potentially fatal chronic infections. Biofilms are notoriously difficult to eliminate—not surprising given that one of their main functions is to protect encased bacteria from threats such as predation, antibiotics, and chemical cleaning agents.

Bleach, harsh oxidizing cleaning products, and petrochemical-derived detergents called surfactants combined with scrubbing are the most effective methods of removing biofilms. However, bleach and harsh chemicals are obviously unsuitable for use in biological settings, and while surfactants are used in products such as hand soap and cosmetics, many are toxic to the environment and can damage the surfaces that they are used on.

But in a study published this month in peer-reviewed journal Langmuir, researchers from the University of Tsukuba have found a new way of tackling biofilms, using cleaning agents derived from microbes themselves.

"Certain Candida yeasts can naturally produce biosurfactants called sophorolipids during the fermentation of oils," explains co-lead author and professor Andrew Utada. "Previous studies have shown that sophorolipids have some degree of antimicrobial activity, but there is conflicting information on the effects of these compounds on biofilms composed of the Gram-negative pathogen Pseudomonas aeruginosa."

Gram-negative bacteria such as P. aeruginosa and Escherichia coli are a major cause of hospital-acquired infections, killing thousands of people every year. Using microfluidic channels, the researchers showed that sophorolipids do a better job of disrupting established P. aeruginosa biofilms than commonly used chemical surfactants.

Surprisingly though, there was no evidence that sophorolipids actually killed the bacteria. A mutant P. aeruginosa strain that produces excessive amounts of biofilm matrix was therefore used to examine the underlying mechanism of biofilm dispersal, revealing that sophorolipids appear to weaken the interaction between the biofilm and the underlying surface and break the internal cohesiveness of the biofilm itself, leading to disruption.

Although biosurfactants are biodegradable and far less harmful to the environment than their chemical counterparts, they are costly to produce. To address this issue, the researchers tested the effects of sophorolipids in combination with the widely used chemical surfactant sodium dodecyl sulfate, with encouraging results.

"Combination testing revealed a synergy between sophorolipids and chemical surfactants, with the two agents together demonstrating stronger antibiofilm effects at concentrations about 100-fold lower than when either one was used in isolation," says PhD candidate Bac Nguyen.

Although reducing the costs associated with the production of biosurfactants is the long-term goal, this synergistic approach to biofilm elimination may open new doors for the treatment of persistent bacterial biofilm-mediated infections.