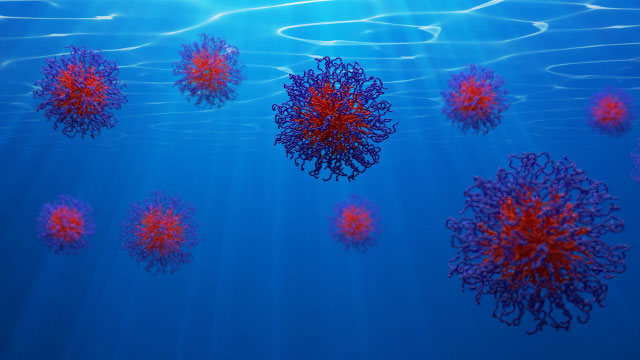 EVANSTON — When famed physicists Max Knoll and Ernst Ruska first introduced the transmission electron microscope (TEM) in 1933, it allowed researchers to peer inside cells, microorganisms, and particles that were once too small to study.

For decades, these high-powered instruments had been limited to taking static snapshots of specimens, which only tell part of the story. Now researchers from Northwestern University and the University of Florida are filling in the blanks to make this story more complete.

The team is part of an effort to develop a new type of TEM that takes dynamic, multi-frame videos of nanoparticles as they form, allowing researchers to view how specimens change in space and time. Knowing how these particles form could change how researchers design future drug-delivery systems, paints, coatings, lubricants, and other materials for which having control over nanoscale properties can lead to large effects on macroscale materials.

“We have demonstrated that TEM does not have to be a microscopy method solely used to analyze what happened after the fact—after a reaction ends,” said Nathan Gianneschi, professor of chemistry, biomedical engineering, and materials science and engineering at Northwestern, who co-led the study. “But, rather, that it can be used to visualize reactions while they are occurring.”

“Before, we just had snapshots of what things looked like in particular instances of time,” said Brent Sumerlin, the George Bergen Butler Professor of Chemistry at the University of Florida, who co-led the study with Gianneschi. “Now, we are beginning to see the evolution of materals in real time, so we can see how transformations occur. It’s mind-blowing.”

Related Article: Nanomaterials: How to Separate Linear and Ring-Shaped Molecules

The research was published Apr. 25 in the journal ACS Central Science. Mollie A. Touve, a graduate student in Gianneschi’s laboratory, is the paper’s first author.

Gianneschi and Sumerlin’s novel technology has three major components: polymerization-induced self-assembly (PISA), a robotic system that assembles the experiments, and a camera attached to the microscope that captures the particles as they form and change.

An expert in PISA, Sumerlin has long used the technique, which makes large quantities of well-defined soft materials, in his laboratory. He specifically uses PISA to form self-assembling micelles, a type of spherical nanomaterial with many applications—from soaps to targeted drug delivery.

Although micelles are well known for having interesting functions, there are knowledge gaps in how they actually form. Gianneschi and Sumerlin wondered if they could use an electron microscope to watch micelles—in action—as they self-assemble with PISA.

“Because these materials are on the nanometer length scale, we obviously needed an electron microscope to observe them,” said Gianneschi, a member of Northwestern’s International Institute of Nanotechnology. “So, essentially, we wanted to use the electron microscope as a test tube.”

With high precision and reproducibility, the team’s robotic system assembled all of the chemicals needed to make the particles. Then, the microscope’s electron beam triggered a reaction that caused the micelles to begin to form. Although Gianneschi’s camera system did not capture the micelles’ entire transformation, it did allow the researchers to see part of it.

“I’m pleasantly surprised that we pulled this part off,” Gianneschi said. “But optimizing the system—so we can see the reaction’s entire trajectory—will keep us busy for the next few years.”

Still, Gianneschi and Sumerlin are pleased that they have introduced an important element to electron microscopy: time. Gianneschi likens their achievement to the process of cooking.

“Imagine cooking dinner without being able to watch it,” he said. “You can follow the recipe, but you don’t really how it’s going. You can’t watch the meat brown on the stove or the dough rise. You need to be able to observe it directly. We take that for granted in normal life."

“With traditional chemical analysis, sometimes the output is a two-dimensional line with a few peaks and valleys, and we use that to gain an idea of what’s happening,” Sumerlin added. “But now we are actually making nanostructures and watching them form. This is a big change.”