The platform developed by the Brown School of Engineering lab of Rice materials scientist Jun Lou integrates catalytic electrodes and perovskite solar cells that, when triggered by sunlight, produce electricity. The current flows to the catalysts that turn water into hydrogen and oxygen, with a sunlight-to-hydrogen efficiency as high as 6.7 percent.

This sort of catalysis isn't new, but the lab packaged a perovskite layer and the electrodes into a single module that, when dropped into water and placed in sunlight, produces hydrogen with no further input.

The platform introduced by Lou, lead author and Rice postdoctoral fellow Jia Liang and their colleagues in the American Chemical Society journal ACS Nano is a self-sustaining producer of fuel that, they say, should be simple to produce in bulk.

"The concept is broadly similar to an artificial leaf," Lou said. "What we have is an integrated module that turns sunlight into electricity that drives an electrochemical reaction. It utilizes water and sunlight to get chemical fuels."

Perovskites are crystals with cubelike lattices that are known to harvest light. The most efficient perovskite solar cells produced so far achieve an efficiency above 25 percent, but the materials are expensive and tend to be stressed by light, humidity, and heat. 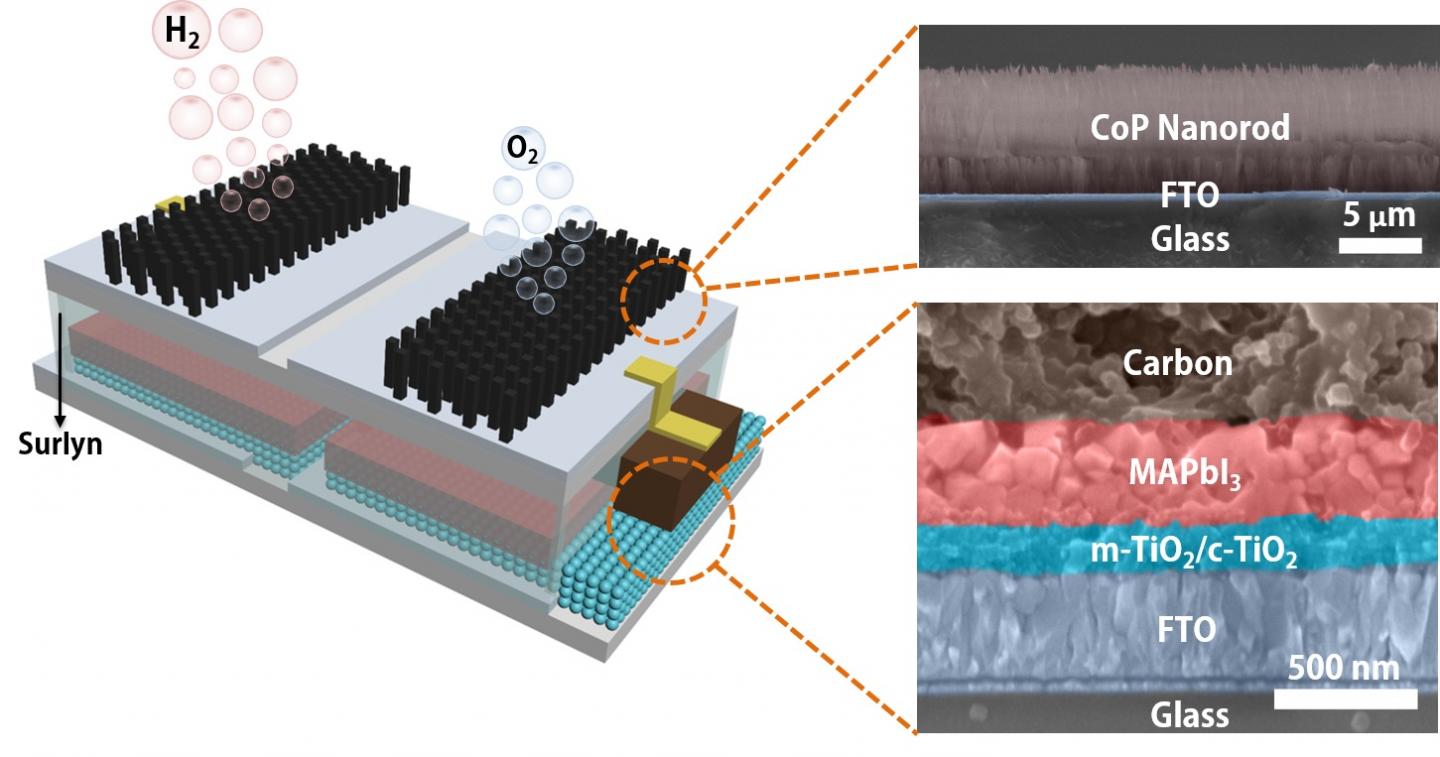 A schematic and electron microscope cross-section show the structure of an integrated, solar-powered catalyst to split water into hydrogen fuel and oxygen. The module developed at Rice University can be immersed into water directly to produce fuel when exposed to sunlight.
Illustration by Jia Liang/Rice University

"Jia has replaced the more expensive components, like platinum, in perovskite solar cells with alternatives like carbon," Lou said. "That lowers the entry barrier for commercial adoption. Integrated devices like this are promising because they create a system that is sustainable. This does not require any external power to keep the module running."

Liang said the key component may not be the perovskite but the polymer that encapsulates it, protecting the module and allowing to be immersed for long periods. "Others have developed catalytic systems that connect the solar cell outside the water to immersed electrodes with a wire," he said. "We simplify the system by encapsulating the perovskite layer with a Surlyn (polymer) film."

The patterned film allows sunlight to reach the solar cell while protecting it and serves as an insulator between the cells and the electrodes, Liang said.

"With a clever system design, you can potentially make a self-sustaining loop," Lou said. "Even when there's no sunlight, you can use stored energy in the form of chemical fuel. You can put the hydrogen and oxygen products in separate tanks and incorporate another module like a fuel cell to turn those fuels back into electricity."

The researchers said they will continue to improve the encapsulation technique as well as the solar cells themselves to raise the efficiency of the modules.