The Southern Ocean is key to Earth’s climate, but the same gusting winds, big waves and strong currents that are important to ocean physics make it perilous for oceanographers.

Instead their job is increasingly being given to ocean drones, the autonomous floating vehicles that collect data from the world’s oceans. With an urgent need to better understand climate to predict how it will shift with more heat-trapping gases, scientists are developing new tools to measure waters below where satellites can penetrate, and in places that are too dangerous or expensive to reach regularly by research ship. They are also sending those instruments on increasingly ambitious missions. 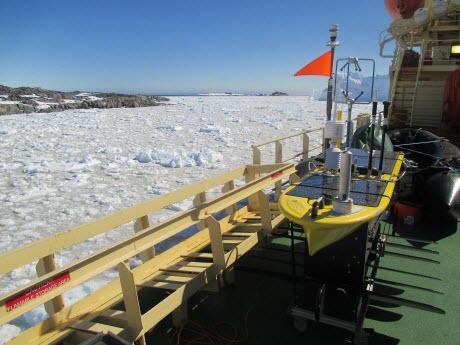 The Wave Glider near Antarctica’s Palmer Station in December (that’s summer for this region) before starting its epic voyage on the Southern Ocean.Photo credit: Avery Snyder/University of WashingtonMany of these new tools look like robotic fish, but the University of Washington sent a robotic surf board to ride the waves collecting data from Antarctica to South America. The Wave Glider, a long-duration ocean robot designed to operate in stormy conditions and high latitudes, can stay at sea for months patrolling for illegal fishing, listening for seismic events, collecting weather or ocean data, and monitoring the environment. Last December, UW researchers sent it out on a first-ever attempt to cross the terrifically turbulent waters of Drake Passage.

The currents circling Antarctica that pose a challenge to mariners also mix significant heat energy from all the world’s oceans. Most of that mixing happens in the top few hundred feet, where winds and waves basically put the surface layer on a spin cycle.

“The Southern Ocean, and the Drake Passage in particular, are key locations that are historically under-sampled,” said first author Jim Thomson, an oceanographer at the UW’s Applied Physics Laboratory. “Using an autonomous platform allowed us to have persistence in the region, as well as track or target the fronts and gradients that make the place so interesting.” 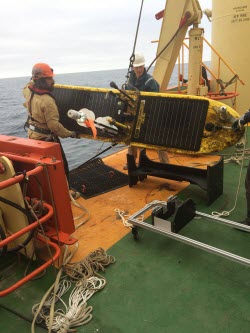 Matt Boyer (left) and Jim Thomson retrieve the Wave Glider in March from off the coast of Argentina.Photo credit: University of WashingtonThe recent paper in Oceanography Magazine recounts the pilot use of the Wave Glider to cross Drake Passage, a roughly 500-mile channel off the tip of South America.

The UW oceanographers used a commercial Wave Glider made by Liquid Robotics, a California-based subsidiary of the Boeing Co., to surf along the water’s surface gathering observations. The researchers added extra sensors for temperature, salinity, air pressure, humidity, and wind to the commercial model.

After a test run in summer 2016 off Washington’s coast, the instrument was deployed off the Antarctic Peninsula in December. It spent about three months zigzagging its way across the fabled Drake Passage, while the researchers occasionally piloted the instrument remotely from shore.

As the study’s authors wrote, this is where the strong Antarctic current becomes “a mess of swirling eddies” and meanders around its central path. “The zig-zag pattern in the middle of Drake Passage was designed to survey the strong fronts and meanders of the Antarctic Circumpolar Current common to that region,” wrote Thomson and co-author James Girton, also with the UW’s Applied Physics Laboratory.

A Wave Glider harnesses energy from the waves, using the shape of the water motion below the surface to drive the vehicle forward with minimal power. With wave energy for motion and solar panels charging batteries to power its sensors, the board can operate for months without maintenance. Even so, the late-summer sun so far south did not provide enough energy to recharge batteries late into the expedition, and a research ship retrieved the instrument and its data near Argentina in late March. Though the board didn’t reach South America, the real goal was the data it collected.

“The mission just completed would have cost many millions of dollars to complete with a ship,” Thomson said. “An autonomous approach allowed us to collect data that has never—and would never have—been collected in this remote region.” 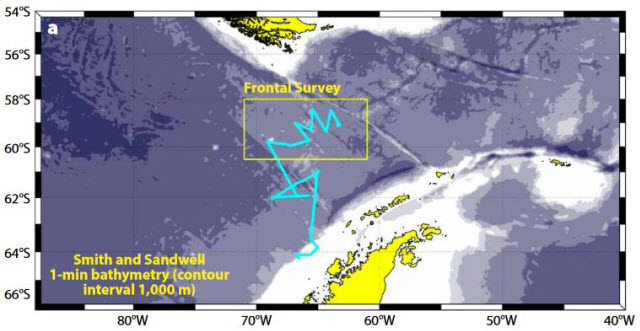 The Wave Glider followed the blue line. It began in summer off the Antarctic Peninsula and traveled north across Drake Passage. The ocean drone zigzagged through the region where Pacific and Atlantic water meets Southern Ocean currents, in which temperatures change dramatically and most mixing occurs.Image credit: James Girton/University of Washington

The authors are still processing the observations collected during the voyage, which was funded by the National Science Foundation, to understand mixing on different spatial scales. They hope that future funding will allow another chance to collect more data and transition this program into regular annual monitoring of the Drake Passage.

“It’s not just about having done this successfully once, it’s about learning how to make this routine.  We do that, and we change the game on data collection in this important region.” Thomson said.