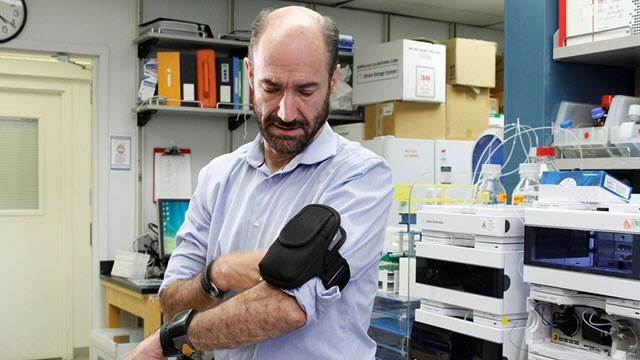 Snyder shows how he secured the "exposome" monitor that he wore for two yearsCredit: Paul Sakuma

We are all exposed to a vast and dynamic cloud of microbes, chemicals, and particulates that, if visible, might make us look something like Pig-Pen from Peanuts.

Using a re-engineered air-monitoring device, scientists from the Stanford University School of Medicine have peered into that plume and discovered a smorgasbord of biological and chemical minutia that swirl in, on and around us. Their findings show, in unprecedented detail, the variety of bacteria, viruses, chemicals, plant particulates, fungi, and even tiny microscopic animals that enter our personal space—a bombardment known as the human "exposome."

"Human health is influenced by two things: your DNA and the environment," said Michael Snyder, PhD, professor and chair of genetics at Stanford. "People have measured things like air pollution on a broad scale, but no one has really measured biological and chemical exposures at a personal level. No one really knows how vast the human exposome is or what kinds of things are in there."

That curiosity—to see, for the first time, what a person's exposure looks like at an individual level and how much it varies among people—was what motivated the study, Snyder said. But studying the exposome also provides an opportunity to clarify environmental influencers of human health that are otherwise obscure, he said. For example, rather than simply blaming pollen, those with seasonal allergies would be able to identify exactly what they're allergic to by monitoring their exposome data and symptoms throughout the year.

The study's findings also reveal information about geographic- and household-chemical spikes and weather-related patterns, and likewise show the wide range of chemical and biological particulates that can be found between individuals—even within a relatively small geographic region, such as the San Francisco Bay Area.

For two years, the scientists collected data from 15 participants who traversed more than 50 different locations. Some people were monitored for a month, some for a week, and one (Snyder) for two full years. To capture bits of each individual's exposome, a small device that straps snuggly to the participant's arm "breathes" in tiny puffs of air—about one-fifteenth the volume of an average human breath.

The device, about the size and shape of a large matchbox, accompanies participants everywhere and is equipped with a sub-micron filter that traps particulate matter in the device. The data—bacteria, viruses, chemicals, fungi, and anything else sucked up by the device—is brought back to Snyder's lab and extracted for DNA and RNA sequencing, as well as chemical profiling to identify all the collected organisms and chemicals that the person is exposed to.

This idea—to siphon up bits of an individual's exposome and systematically categorize what's in it—is quite novel, Snyder said. And it required Jiang to stitch together an entirely new database.

"Scientists had assembled separate bacteria, viral or fungi databases, but to fully decode our environmental exposures, we built a pan-domain database to cover more than 40,000 species," Jiang said. It includes information on bacteria, viruses, fungi, animals, plants and more, all organized in a single searchable database.

"We sequenced these samples in incredible detail," said Snyder, who is also the Stanford W. Ascherman, MD, FACS, Professor in Genetics. "No one has ever done a study this deep before. We ended up with about 70 billion readouts."

Between participants, Snyder and Jiang found that exposomes could be vastly different, even in a reasonably tight geographic region—in this case, the San Francisco Bay Area. Snyder cited an especially well-controlled portion of the study, in which four participants, including Snyder, were closely monitored over one month, as a case in point.

Each person lived in a distinct region of the San Francisco Bay Area: Palo Alto, Sunnyvale, Redwood City and San Francisco (though the person who lived in Redwood City commuted across the bay to his job). "It turns out, even at very close distances, we have very different exposure profiles or 'signatures,'" Snyder said. These personal signatures are essentially traces of specific fungi, plants, chemicals and bacteria that are consistently seen on or around a single person, but that vary between people. Many environmental aspects contribute to this microscopic amalgam—pets, household chemicals, flowers in bloom and even rain.

"The bottom line is that we all have our own microbiome cloud that we're schlepping around and spewing out," Snyder said.

Specific and unique signatures were captured for every individual (although Snyder added that DEET, an insect repellant, along with several carcinogens were found in just about every chemical sample). For example, the resident from San Francisco showed high rates of "sludge bacteria," or bacteria typically found in wastewater and sewage treatments. Snyder had consistently high fungal exposures at home due to what he suspects is the use of "green" paint. "The guy who painted my house was a really environmentally friendly, green person. And he avoided using paints with a substance called pyridine in it," Snyder said. Pyridine, which used to be a popular additive to house paints, has an inverse relationship with fungus, meaning the less pyridine, the more fungus.

Snyder's profile was the most diverse, as he took the device everywhere he went, both nationally and internationally, for two years, swapping out its filters for every new location. Outside his pet exposures (Snyder has a cat, a dog and a guinea pig), his signature also showed evidence of eucalyptus in the early spring months, providing some nuanced information about what might be causing his April allergies.

Connecting it to human health

Besides the four highly controlled participants, a dozen participants were added during different times of the year, helping Snyder capture exposures brought by weather, seasons and location.

"There are a lot of findings that haven't been descried before—all kinds of fungal, bacterial and plant seasonal patterns," Snyder said. The device can even pick up viral/bacterial signatures and carcinogenic particulates in the air. Although the devices picked up potential pathogenic viral and bacterial sequences, it can be tricky to distinguish a threatening pathogen to humans from one of its harmless close cousins, he said.

As for the carcinogens, it's also more complicated than simply detecting them in the device. "We're measuring individual exposures, not absolute levels," he said. "So at this point the data isn't generalizable enough to make broad claims."

But that's not to say that one day it won't be. Snyder said that this study is just scratching the surface of human exposome data and how it relates to health, and his team's future goals center on better understanding the exposome as it relates to human health. "We want to measure more people in more diverse environments," Snyder said. "We also want to simplify the technology, ideally to the point that everyone can be out there measuring their own personal exposures—perhaps something like an exposome-detecting smartwatch."