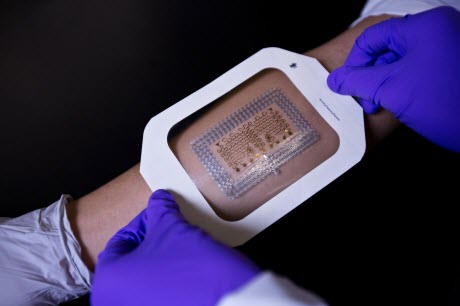 Assistant professor Nanshu Lu and her team have developed a faster, inexpensive method for making epidermal electronics.Photo courtesy of the Cockrell School of EngineeringAUSTIN, Texas — A team of researchers in the Cockrell School of Engineering at the University of Texas at Austin has invented a method for producing inexpensive and high-performing wearable patches that can continuously monitor the body’s vital signs for human health and performance tracking, potentially outperforming traditional monitoring tools such as cardiac event monitors.

The researchers published a paper on their patent-pending process in Advanced Materials on Sept. 23.

The team’s breakthrough is a repeatable “cut-and-paste” method that cuts manufacturing time from several days to only 20 minutes. The researchers believe their new method is compatible with roll-to-roll manufacturing — an existing method for creating devices in bulk using a roll of flexible plastic and a processing machine.

Reliable, ultrathin wearable electronic devices that stick to the skin like a temporary tattoo are a relatively new innovation. These devices have the ability to pick up and transmit the human body’s vital signals, tracking heart rate, hydration level, muscle movement, temperature and brain activity.

Although it is a promising invention, a lengthy, tedious and costly production process has until now hampered these wearables’ potential.

“One of the most attractive aspects of epidermal electronics is their ability to be disposable,” Lu said. “If you can make them inexpensively, say for $1, then more people will be able to use them more frequently. This will open the door for a number of mobile medical applications and beyond.”

The UT Austin method is the first dry and portable process for producing these electronics, which, unlike the current method, does not require a clean room, wafers and other expensive resources and equipment. Instead, the technique relies on freeform manufacturing, which is similar in scope to 3-D printing but different in that material is removed instead of added.

The two-step process starts with inexpensive, pre-fabricated, industrial-quality metal deposited on polymer sheets. First, an electronic mechanical cutter is used to form patterns on the metal-polymer sheets. Second, after removing excessive areas, the electronics are printed onto any polymer adhesives, including temporary tattoo films. The cutter is programmable so the size of the patch and pattern can be easily customized.

Deji Akinwande, an associate professor and materials expert in the Cockrell School, believes Lu’s method can be transferred to roll-to-roll manufacturing.

“These initial prototype patches can be adapted to roll-to-roll manufacturing that can reduce the cost significantly for mass production,” Akinwande said. “In this light, Lu’s invention represents a major advancement for the mobile health industry.”

After producing the cut-and-pasted patches, the researchers tested them as part of their study. In each test, the researchers’ newly fabricated patches picked up body signals that were stronger than those taken by existing medical devices, including an ECG/EKG, a tool used to assess the electrical and muscular function of the heart. The team also found that their patch conforms almost perfectly to the skin, minimizing motion-induced false signals or errors.

The UT Austin wearable patches are so sensitive that Lu and her team can envision humans wearing the patches to more easily maneuver a prosthetic hand or limb using muscle signals. For now, Lu said, “We are trying to add more types of sensors including blood pressure and oxygen saturation monitors to the low-cost patch.”

This research was funded by NSF grants, including Lu’s NSF CAREER grant.

The University of Texas at Austin is committed to transparency and disclosure of all potential conflicts of interest. The university investigator who led this research, Nanshu Lu, has submitted required financial disclosure forms with the university. Lu is co-founder and scientific adviser for Stretch Med Inc., a medical device company in which she has an equity partnership. Stretch Med is developing human electrophysiological sensors for clinical use, drawing on some of the patent-pending technologies described in this release.