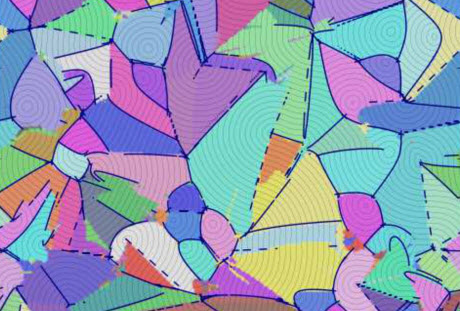 A smectic microstructure of a two-dimensional planar boundary of a 3-D simulation. The intersection of smectic layers and the section form sets of concentric circles, which are shown as thin black curves.Image credit: James Sethna LabUsing the latest computer game technology, a Cornell University-led team of physicists has come up with a “suitably beautiful” explanation to a puzzle that has baffled researchers in the materials and theoretical physics communities for a century.

Physics professor James Sethna has co-authored a paper on the unusual microstructure of smectics–liquid crystals whose molecules are arranged in layers and form ellipses and hyperbolas–and their similarity to martensites, a crystalline structure of steel.

In fact, Sethna and his cohorts have termed smectic liquids “the world’s weirdest martensite.”

Sethna’s group employed the computing power of a graphics processing unit, or GPU–the technology that has led to the advent of amazingly realistic video games–to run hundreds of numerical simulations. They developed a clustering algorithm and proposed a theory of smectic microstructure that merges the laws of association between smectic liquid crystals and martensites.

“This has been this puzzle for many years, and it finally has a suitably beautiful explanation,” Sethna said. “It ties together ideas from special relativity, and ideas from martensites, to explain this whole puzzle.

“It’s aesthetically beautiful,” he added, “there’s a little bit of Euclidean geometry for those people who actually went to geometry class. It’s like, ‘Ellipses and hyperbolas, I remember those.’ And you pour this (smectic) liquid and it forms these things.”

If you fill a glass with a smectic liquid, due to its layering pattern the liquid forms ellipses and hyperbolas. The ellipses are defects–places where the desired ordering breaks down.

In martensite steel, named for German metallurgist Adolf Martens in 1898, its different low-energy crystal orientations mesh together in microscopic layers to give it a hardness factor far superior to pearlitic and other forms of steel.

In 1910, French physicist Georges Friedel studied a fluid that formed ellipses and hyperbolas, and realized that they must be formed by equally spaced layers of molecules.

Sethna suggests, with a wry smile, that maybe the reason Friedel knew enough to be able to identify these ellipses and hyperbolas is that “he was French. And in France, they used to study much more sophisticated math in high school, and everybody in high school learned about the cyclides of Dupin.”

Kamien had recently deduced that the different shapes of ellipses and hyperbolas could be related by the same rules that govern space and time in special relativity. Kamien and Sethna discussed this problem last spring, when Sethna was on sabbatical at Penn.

“He had this long-standing interest in martensites … and I had an interest in these liquid crystals, smectics,” Kamien said, “and after talking for a while, we realized that these were the same thing.”

Kamien said his interest in smectics was, in part, sparked by a paper Sethna co-wrote with French physicist Maurice Kleman in 1982, “Spheric domains in smectic liquid crystals.”

The recent breakthrough, inspired by the GPU simulations, was to realize the connection between smectics and martensites.

“For over 100 years, these cool focal conics have been a curiosity–they didn’t fit into our system,” says Sethna. “Now we know that these cool cyclides follow the same rules as the crystals that fit together into martensitic steel.”

This work was supported by grants from the U.S. Department of Energy and the Simons Foundation.