Short video illustrating wetting of Mars soil analog material covering calcium sulfate and calcium chloride from below, absorption of water by salts and soil particles, migration of the salts towards the surface, and formation of crust with cavities.
Janice Bishop and Markus Gruendler, SETI Institute

MOUNTAIN VIEW, CA — February 3, 2021 — A team of researchers led by SETI Institute senior research scientist Janice Bishop, a member of the SETI Institute NASA Astrobiology Institute (NAI) team, has come up with a theory about what is causing landslides on the surface of Mars.

Previous ideas suggested that liquid debris flows or dry granular flows caused this movement. Neither model can completely account for the seasonal martian flow features known as Recurring Slope Lineae (RSL). The team alternatively hypothesizes that ice melting in the near-surface regolith is causing changes at the surface that make it vulnerable to dust storms and wind. As a result, the RSL features appear and/or expand on the surface of Mars today. Further, the team believes that the thin layers of melting ice result from interactions between underground water ice, chlorine salts and sulfates, which create an unstable, liquid-like flowing slush instigating sinkholes, ground collapse, surface flows and upheave.

"I am excited about the prospect of microscale liquid water on Mars in near-surface environments where ice and salts are present," said Bishop. "This could revolutionize our perspective on habitability just below the surface on Mars today."

High Resolution Imaging Science Experiment (HiRISE) data from the Mars Reconnaissance Orbiter (MRO) shows RSL located on sun-facing slopes where they continue to appear and/or expand over time. Previous studies have suggested RSL are related to chlorine salts and noted their occurrence in regions of high sulfate outcrops. The current study extends these observations with a near-surface cryosalt activity model based on field observations and lab experiments. Mars analog field investigations on Earth, such as in the Dry Valleys of Antarctica, the Dead Sea in Israel, and Salar de Pajonales in the Atacama Desert, show that when salts interact with gypsum or water underground, it causes disruptions on the surface, including collapse and landslides. 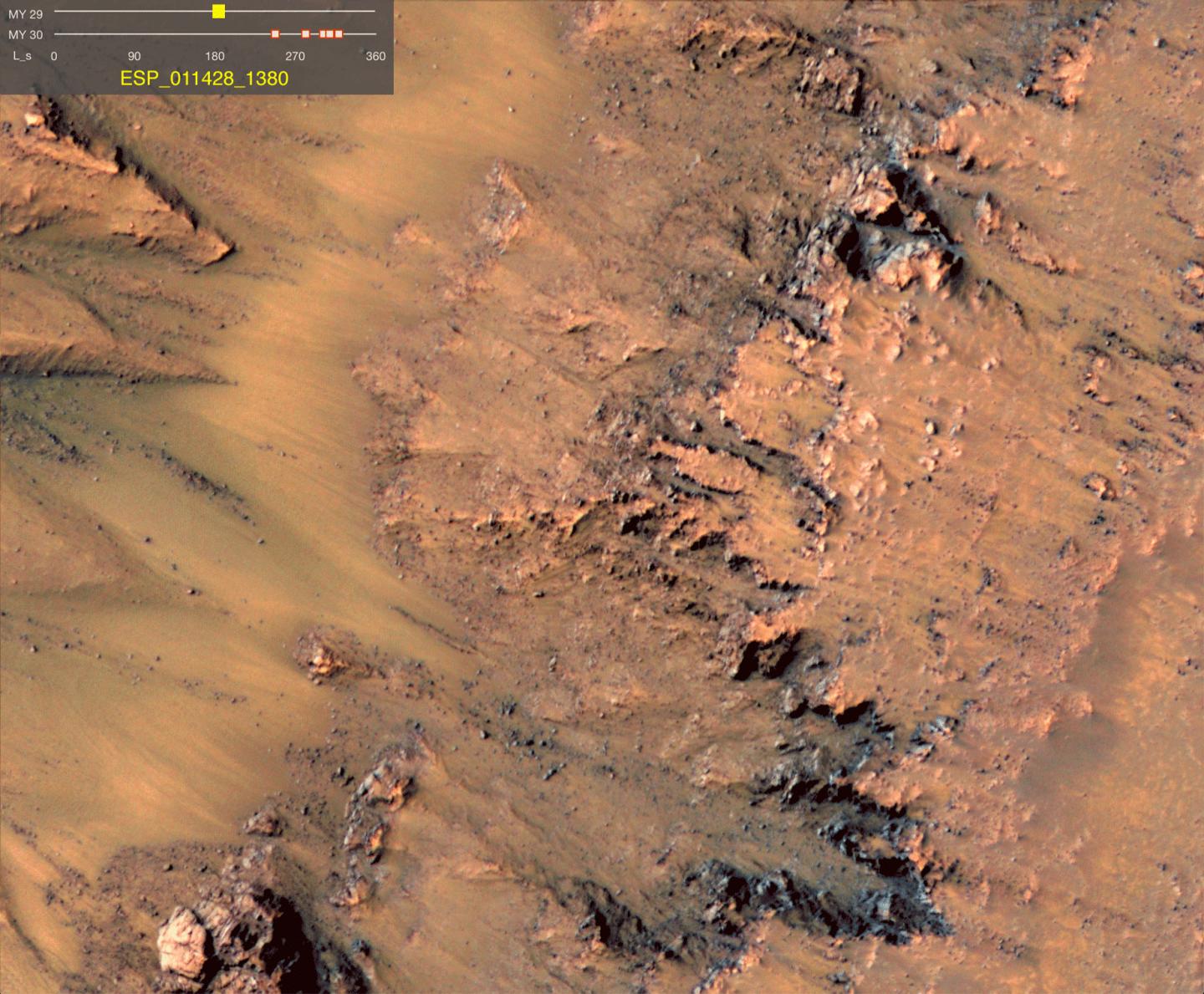 Development of RSL features at Palikir crater on Mars as viewed by the HiRISE camera on 6 occasions during Mars years 29-30.
NASA/JPL/University of Arizona

"During my fieldwork at Salar de Pajonales, a dry salt bed in Northern Chile, I have observed numerous examples of the action of salts on the local geology. It's gratifying to find that it could play a role in shaping Mars as well," said Nancy Hinman, Professor of Geosciences at the University of Montana and member of the SETI Institute NAI team.

To test their theory, the team conducted lab experiments to observe what would occur if they froze and thawed Mars analog samples comprised of chlorine salts and sulfates at low temperatures such as would be found on Mars. The result was slushy ice formation near -50 °C, followed by gradual melting of the ice from -40 to -20 °C.

"Probing the low-temperature behavior of Mars analog permafrost in the lab with infrared spectroscopy revealed that thin layers of liquid-like water were forming along grain surfaces as the salty soils thawed under subzero, Mars-like temperatures," said Merve Yeşilbaş, NASA Postdoctoral (NPP) Fellow at the SETI Institute and collaborator on the NAI team.

Modeling the behavior of chlorine salts and sulfates, including gypsum, under low temperatures demonstrates how interrelated these salts are. It may be that this microscale liquid water migrates underground on Mars, transferring water molecules between the sulfates and chlorides, almost like passing a soccer ball down the field. Additional lab experiments tested these sulfate-chloride reactions in a Mars analog soil with color indicators that revealed subsurface hydration of these salts and the migration of salts through the soil grains.

"I was thrilled to observe such rapid reactions of water with sulfate and chlorine salts in our lab experiments and the resulting collapse and upheave of Mars analog soil on a small scale, replicating geologic collapse and upheave features in karst systems, salt reservoirs, and edifice collapse on a large scale," said Bishop.

This project arose out of work on sediments from the McMurdo Dry Valleys in Antarctica, one of our planet's coldest and driest regions. As on Mars, the Dry Valleys' surface regolith is scoured by dry winds most of the year. However, subsurface permafrost contains water ice, and chemical alteration appears to be occurring below the surface. 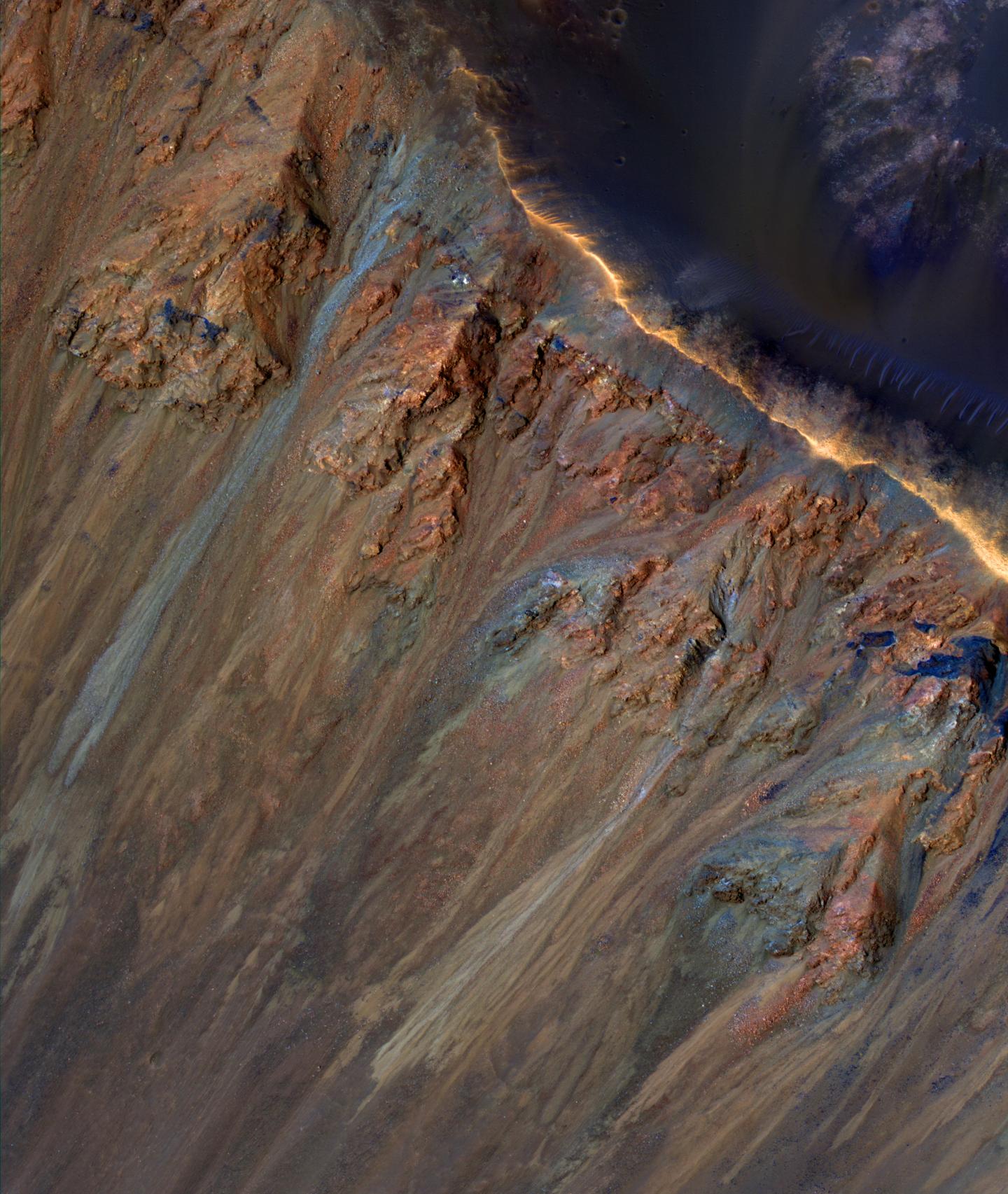 HiRISE camera view of Krupac crater on Mars featuring gullies along the rim and RSL lower down the crater wall.
NASA/JPL/University of Arizona

"Sediments in the Dry Valleys provide an excellent testbed for processes that may be occurring on Mars," said Zachary Burton, recent graduate of Stanford University and collaborator on the SETI Institute NAI team. "The presence of elevated concentrations of sulfates and chlorides a few centimeters below the harsh surface landscape in Wright Valley presents the intriguing possibility that these water-related mineralogical associations and attendant processes could exist on Mars as well."

Water ice has been detected below the surface on Mars within soil scooped up at the Phoenix landing site, as well as from orbit using radar measurements and using neutron and gamma ray spectroscopy. More recently, HiRISE has captured views of this near-surface ice at mid-latitudes. Warmer temperatures (e.g., -50 to -20 °C) at equatorial sites on Mars could support subsurface liquid water/brines during spring and summer months. RSL observed at some of these equatorial sites are often interpreted to be related to larger features called gullies, which are similar to ravines on Earth.

"Tributary gully systems present along the Northern (poleward-facing) and Northeastern slopes of Krupac crater and RSL lower down the crater wall in this region could be associated with surface features produced through near-surface brine activity, according to our model," said Virginia Gulick, SETI Institute senior research scientist and member of the SETI Institute NAI team.

In addition to helping explain Mars' geological and chemical processes, this theory also suggests that the martian environment continues to be dynamic—that the planet is still evolving and active—which has implications for both astrobiology and future human exploration of the Red Planet. The potential for thin films of water below the surface on Mars in salty permafrost regions opens new doors for exploring habitability.

The paper is published in Science Advances.

- This press release was originally published on the SETI website. It has been edited for style