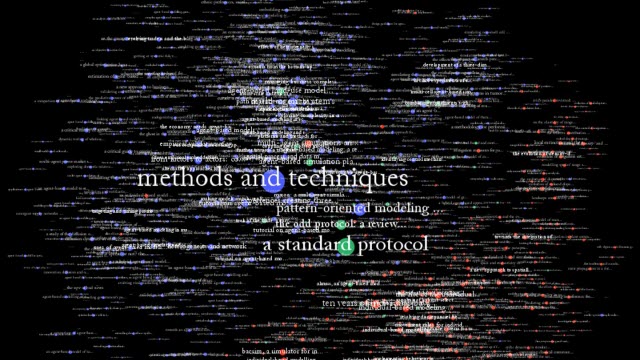 Kyoto, Japan — In a new report in the Proceedings of the Royal Society B, Christian E Vincenot from Kyoto University's Department of Social Informatics investigates how seemingly separate concepts in scientific fields fuse to become universal approaches.

Sometimes it's just a matter of a few words and key papers.

Research collaboration can represent a peak of scientific advancement. The merging of concepts leads to previously unexplored questions and methods, spurring innovation. But disciplinary boundaries limit such development, hindering understanding of key vocabulary or concepts.

Vincenot chose to compare two modeling concepts: ABM—agent based modeling—and IBM—individual based modeling. ABM is used frequently in the computer sciences, while IBM is utilized primarily in ecology.

As it turns out, both are based on the same principle, and are used to study complex systems by modeling a single individual and then scaling that behavior up to a larger population.

"A few years ago I was presenting my research at an interdisciplinary talk involving ecologists and computer scientists," reflects Vincenot. "I started using ABM and IBM interchangeably, which began to cause confusion. People unfamiliar with the similarity were surprised when I told them that the modeling principles are the same."

These interactions raised the question: how do two concepts evolve separately in different scientific domains and then converge into a universal standard?

Vincenot began by developing a new methodology to analyze citations in papers that used the two terms, and tracked the changes over time. He mapped individual papers and connect these with papers they had cited, resulting in publications citing the same paper being close to each other.

ABM and IBM, he found, were initially disjointed and isolated within their respective fields. But over time, the literature began to merge, and by 2015—12,000 publications later—a distinct fusion of the two terms could be observed.

"The most surprising thing is that only a few publications were required for this fusion between ABM and IBM to happen," explains Vincenot. "Out of all the papers, only six were key for the fusion. And these weren't necessarily the most cited papers."

He hypothesizes that three things are needed for fusion to occur: researchers being aware of issues in different fields; common language, terminology, and software being developed; and most importantly, developing more unified theories.

Vincenot clarifies: "Awareness and communication are enough to instigate interdisciplinary work, but ultimately they are insufficient to give rise to a self-standing science. We need more transcendental theories, which serve as frameworks for sciences to develop in a self-sustaining manner. Basically, we must interpret current results and use them as building blocks to recursively create new theories."

The next step in his study is to confirm the conjectures by using other concepts and terms in science. Thankfully the methodology is easy to apply: it's just a matter of finding new ideas.