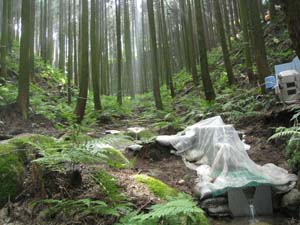 Testing equipment used to measure nitrogen runoff.Photo courtesy of Masaaki ChiwaMasaaki Chiwa is the lead author of the study and an assistant professor at Kyushu University in Japan. According to Chiwa, the pollution is not the fault of the trees. It’s the management of the plantations. In Japan, as in other countries, natural forests usually play a significant role in maintaining water quality.

“Many Japanese cedar and Japanese cypress plantations were established in the 1950s and 1960s—60% of those on private land,” according to Chiwa. “These are not natural forests; they were meant for commercial purposes.”

At the time of their planting, there was a short supply of these trees. However, an increase in imports of other woods has affected prices of Japanese cedar and cypress and led to the decline in active plantation management. The result was overcrowded land with aging trees and little to no undergrowth.

Where does all this nitrogen come from? Just like in a natural forest, needles fall from the aging trees and accumulate on the plantation floor. This is part of Mother Nature’s way of recycling nutrients. Earthworms and soil microbes decompose the needles and return the nutrients to the soil. Younger growth nearby finishes the process and takes up the nutrients. 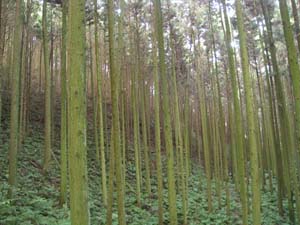 Cedar plantation in Japan.Photo courtesy of Masaaki ChiwaHowever, the age of the trees in these plantations means they are growing more slowly. They use fewer nutrients from the soil than younger trees, including nitrogen. Furthermore, crowding of the trees means there is too much shade to encourage new growth. This prevents a new, healthy understory that would use the nitrogen (and other nutrients) from the soil. Because the plants are not using the nutrients, the nutrients form runoff heading to the streams.

Since cedar and cypress plantations account for 30% of the forestland in Japan, the findings of this study are significant. Chiwa and his team would recommend that the plantation land be thinned and returned to a more natural forest state.

As part of another project, some landowners thinned plantations in 2012. To verify that the thinning will reduce runoff, Chiwa and his team are now measuring the amount of nitrogen flowing from the plantations. “We have been measuring water quality to evaluate the effect of forest thinning on water quality including nitrogen loss.”

Hopefully, better management will bring these plantations back to a less-crowded, more natural state, and restore their ability to clean water rather than pollute it.

The study was published in the Journal of Environmental Quality.