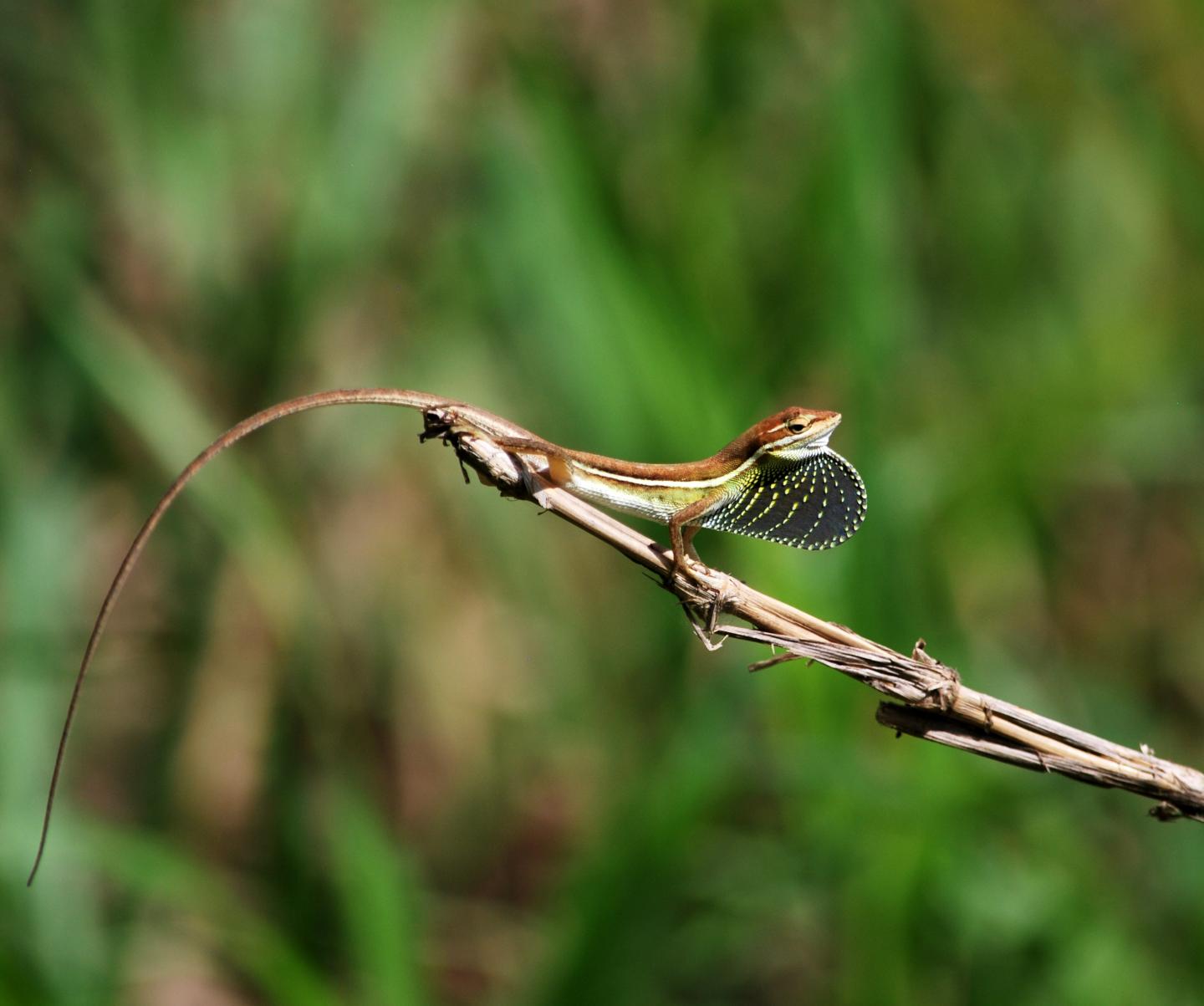 The Anolis auratus is one of several lizard species studied as part of new research comparing lizard genomes to those of other animalsPhoto Source: Kenro Kusumi

Lizards have special superpowers. While birds can regrow feathers and mammals can regrow skin, lizards can regenerate entire structures such as their tails. Despite these differences, all have evolved from the same ancestor as lizards.

Spreading through the Americas, one lizard group, the anoles, evolved like Darwin's finches, adapting to different islands and different habitats on the mainland. Today there are more than 400 species.

Constructing a family tree for three lizard species collected in Panama at the Smithsonian Tropical Research Institute (STRI) and a fourth from the southeastern U.S., scientists at Arizona State University compared lizard genomes—their entire DNA code—to those of other animals.

The researchers discovered that changes in genes involved in the interbrain (the site of the pineal gland and other endocrine glands), for color vision, hormones, and the colorful dewlap that males bob to attract females, may contribute to the formation of boundaries between species. Genes regulating limb development also evolved especially quickly.

"While some reptiles such as tortoises changed remarkably little over millions of years, anole lizards evolved quickly, generating a diversity of shapes and behaviors," said Kenro Kusumi, corresponding author and professor at ASU School of Life Sciences. "Now that sequencing entire genomes is cheaper and easier, we discovered molecular genetic evidence for rapid evolution that may account for striking differences between bodies of animals living in different environments."

Kusumi's lab, working with colleagues at the University of Arizona College of Medicine-Phoenix, is especially interested in how reptiles' genomes shape their ability to regenerate and to develop a diversity of body forms. 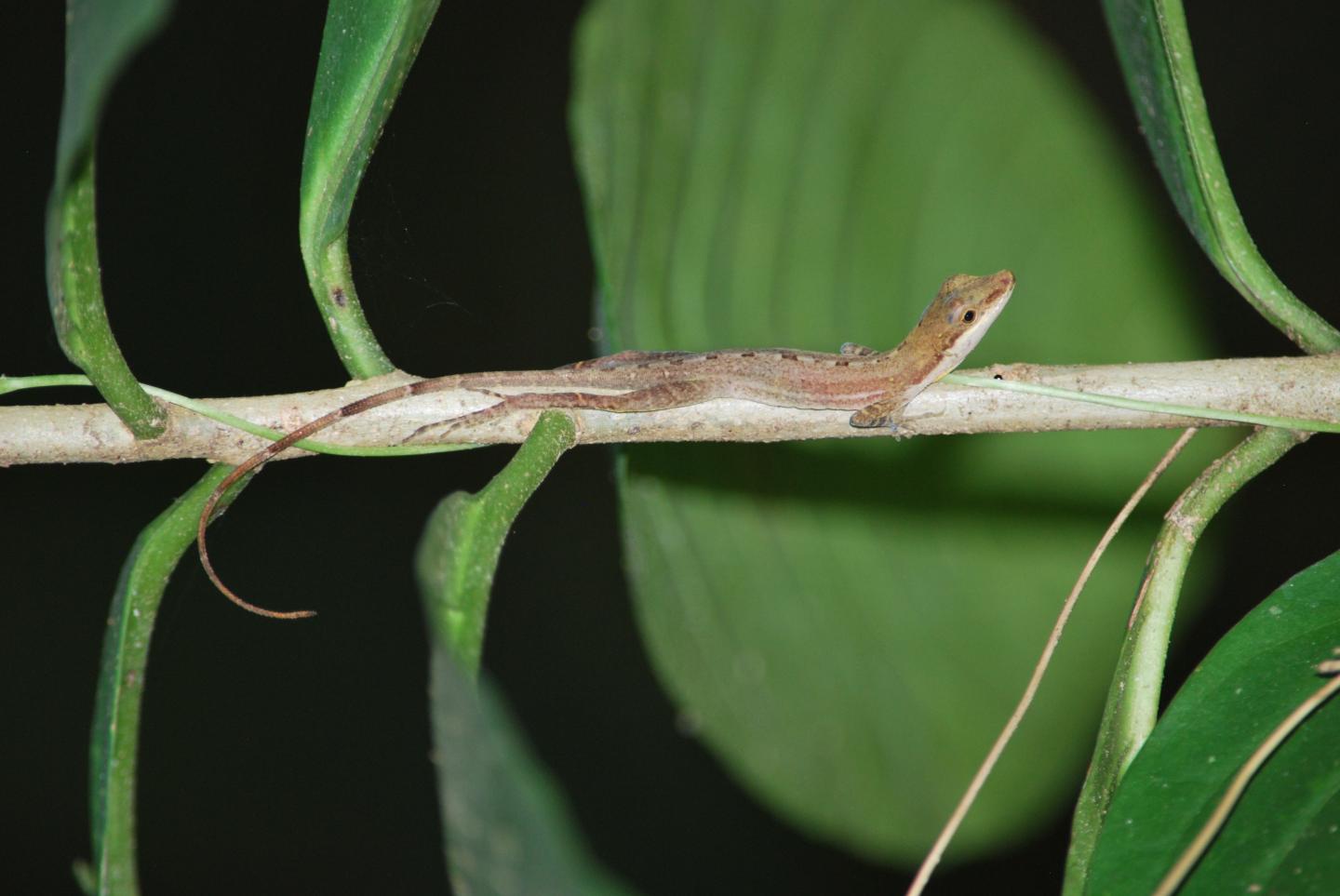 This is the first time the complete genetic code of any vertebrate species from Panama has been sequenced and analyzed.Photo Source: Kenro Kusumi

"This is the first time the complete genetic code—the genome—of any vertebrate species from Panama has been sequenced and analyzed," said Oris Sanjur, co-author and Associate Director for Science Administration at STRI. "Information from these three species is an important contribution to our understanding of biodiversity and the evolution of new species."

Scientists estimate that there are 40 species of anolid lizards living in Panama, compared to only one in the U.S. A team from ASU collected three species with permission from the Ministry of the Environment, MiAmbiente: the Central American giant anole, Anolis frenatus, lives high on tree trunks; the grass anole, A. auratus, perches on bushes or on grassy vegetation and the slender anole, A. apletophallus, found only in Panama, hangs out lower on tree trunks or on the ground.

Researchers at ASU's School of Life Sciences lined up the DNA sequences of the lizards with the DNA sequences of 31 other animals: the lobe-finned fish and the four-legged animal groups that evolved from them. They also took a careful look at genes that code for proteins: more than 22,000 genes in the green anole, A. carolinensis, versus approximately 20,000 identified each in A. auratus and A. frenatus and 13,000 in A. apletophallus.

One obvious explanation for a faster rate of evolution is the anole lizards' faster rate of reproduction. Anoles typically mate in their first year of life, while other reptiles take much longer to reach sexual maturity. They also breed with many other individuals so mutations that make it difficult for individuals to survive are eliminated fairly quickly.

The first and only other anole lizard to be sequenced previously was the green anole, A. carolinensis, the only anole species resident in the U.S. In that study from MIT, the A. carolinensis genome held evidence of more recent evolution and the loss of ancient repeated elements in the part of the DNA that does not code for proteins. In this sense, it was important to sequence the three Panamanian species, because the U.S. species may not be the most representative of the diverse anole group.

"For 15 years, an impressive amount of time and money poured into discovering the genomes of mammals, motivated by our drive to understand human evolution and to look for cures for disease. Even though the squamate reptiles include more than 10,000 species—almost double the number of mammal species—a single genome was not enough to understand the variability within this group," said the first author of the report, Marc Tollis, a post-doctoral fellow at ASU.

"By comparing these four anole lizard genomes, we're beginning to understand how one of the most diverse groups of vertebrates regenerate, develop and diversify," he added.