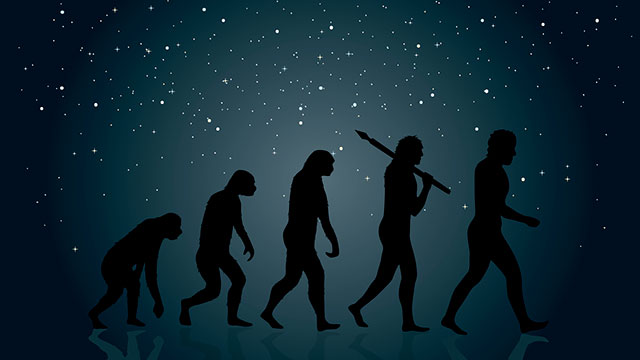 Researchers at Case Western Reserve University have cracked the evolutionary mystery of why chimpanzees and gorillas walk on their knuckles: The short explanation is that these African apes climb trees and they are mobile on the ground.

Their bodies—more specifically, their hands—represent a compromise adaptation allowing both forms of travel.

That’s according to Bruce Latimer, professor of anthropology, anatomy, and cognitive science and director of the Center for Human Origins, who was one of the study’s authors. Their work was published in The Anatomical Record.

Latimer said much of the research ties anatomy with its relationship to Newton’s laws of motion: For every action, there is an equal and opposite reaction.

“When you walk, there’s a reaction from the ground pushing up,” he said. “Chimps and gorillas are large bodied animals and, as a consequence, they have trouble dissipating all that ground reaction energy.”

This is especially true given the anatomical adaptations they have for climbing, Latimer said.

“In running humans, these reaction forces, can be multiples of body weight on a single supporting foot,” he said. “That’s why we have a uniquely human adaptation the arch in our foot—it’s a shock absorber.”

This also why the old saw rings true that people with flat feet can’t join the infantry, Latimer said. “Without the shock absorbing properties of the arch, long marches would result in damage to the bones of the foot and ankle.”

In chimps and gorillas, climbing adaptations don’t allow them to walk upright. They have long arms, short legs, stiff backs, and cone-shaped torsos.

Their triangle-shaped torsos allows for better rotation at the shoulder which also serves as a shock dissipater during knuckle walking, according to the research. In addition, chimps and gorillas also utilize their forearm muscles for climbing and for impact absorption when on the ground.

“Clearly, when humans stood up, we completely forfeited the use of our upper limbs for locomotion,” Latimer said.

The “knuckle-dragging” mystery has challenged researchers for years.

“Walking on your knuckles is absolutely as odd as walking bipedally, a very peculiar way to get around. It doesn’t make sense, and it’s bothered anthropologists for years. Only chimps and gorillas do it. No one has come with the reason why—until now.”

Latimer teaches microscopic anatomy and evolution at Case Western Reserve School of Dental Medicine. The focus of his research is the evolution of human walking.

Latimer was joined in the research with C. Owen Lovejoy, a distinguished professor of anthropology at Kent State University, and Scott Simpson from the Case Western Reserve School of Medicine anatomy department.