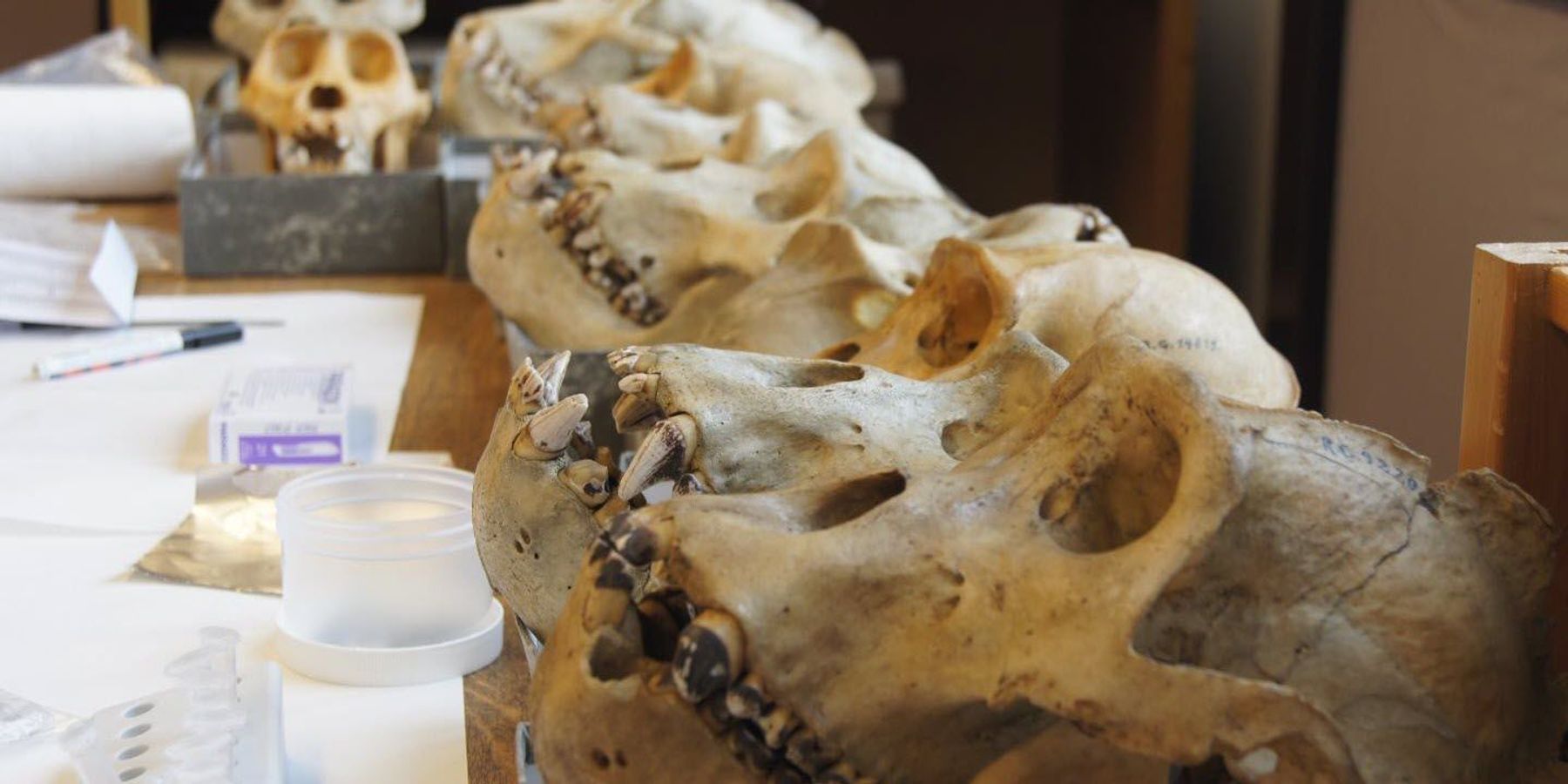 Grauer's gorilla specimens at the Royal Museum for Central Africa in Tervuren (Belgium), showing typical dental calculus deposits on the teeth that are stained dark likely as a result of their herbivorous diet.
Katerina Guschanski

A new study looking at the evolutionary history of the human oral microbiome shows that Neanderthals and ancient humans adapted to eating starch-rich foods as far back as 100,000 years ago, which is much earlier than previously thought.

The findings suggest such foods became important in the human diet well before the introduction of farming and even before the evolution of modern humans. And while these early humans probably didn't realize it, the benefits of bringing the foods into their diet likely helped pave the way for the expansion of the human brain because of the glucose in starch, which is the brain's main fuel source.

"We think we're seeing evidence of a really ancient behavior that might have been part encephalization—or the growth of the human brain," said Harvard professor Christina Warinner, PhD '10. "It's evidence of a new food source that early humans were able to tap into in the form of roots, starchy vegetables, and seeds."

The findings come from a seven-year study published in the Proceedings of the National Academy of Sciences on Monday that involved the collaboration of more than 50 international scientists. Researchers reconstructed the oral microbiomes of Neanderthals, primates, and humans, including what's believed to be the oldest oral microbiome ever sequenced—a 100,000-year-old Neanderthal.

The goal was to better understand how the oral microbiome—a community of microorganisms in our mouths that help to protect against disease and promote health—developed since little is known about its evolutionary history.

"For a long time, people have been trying to understand what a normal healthy microbiome is," said Warinner, assistant professor of anthropology in the Faculty of Arts and Sciences and the Sally Starling Seaver Assistant Professor at the Radcliffe Institute. "If we only have people today that we're analyzing from completely industrialized contexts and that already have high disease burdens, is that healthy and normal? We started to ask: What are the core members of the microbiome? Which species and groups of bacteria have actually co-evolved with us the longest?"

The scientists analyzed the fossilized dental plaque of both modern humans and Neanderthals and compared them to those of humanity's closest primate relatives, chimpanzees and gorillas, as well as howler monkeys, a more distant relative.

Using newly developed tools and methods, they genetically analyzed billions of DNA fragments preserved in the fossilized plaque to reconstruct their genomes. It's similar in theory to how archeologists painstakingly piece together ancient broken pots, but on a much larger scale.

The biggest surprise from the study was the presence of particular strains of oral bacteria that are specially adapted to break down starch. These strains, which are members of the genus Streptococcus, have a unique ability to capture starch-digesting enzymes from human saliva, which they then use to feed themselves. The genetic machinery the bacteria uses to do this is only active when starch is part of the regular diet.

Both the Neanderthals and the ancient humans scientists studied had these starch-adapted strains in their dental plaque while most of the primates had almost no streptococci that could break down starch.

"It seems to be a very human specific evolutionary trait that our Streptococcus acquired the ability to do this," Warinner said.

The findings also push back on the idea that Neanderthals were top carnivores, given that the "brain requires glucose as a nutrient source and meat alone is not a sufficient source," Warinner said.

Researchers said the finding makes sense because for hunter-gatherer societies around the world, starch-rich foods—underground roots, tubers (like potatoes), and forbs, as well as nuts and seeds, for example—are important and reliable nutrition sources. In fact, starch currently makes up about 60 percent of calories for humans worldwide.

"Its availability is much more predictable across the annual season for tropical hunter-gatherers," said Richard W. Wrangham, Ruth B. Moore Professor of Biological Anthropology and one of the paper's co-authors. "These new data make every sense to me, reinforcing the newer view about Neanderthals that their diets were more sapien-like than once thought, [meaning] starch-rich and cooked."

The research also identified 10 groups of bacteria that have been part of the human and primate oral microbiome for more than 40 million years and are still shared today. While these bacteria may serve important and beneficial roles, relatively little is known about them. Some don't even have names.

Focusing on Neanderthals and today's humans, the analysis surprisingly showed the oral microbiome of both groups were almost indistinguishable. Only when looking at individual bacterial strains could they see some differences. For example, ancient humans living in Europe before 14,000 years ago during the Ice Age shared some bacterial strains with Neanderthals that are no longer found in humans today.

The differences and similarities from the study are all part of what makes us human, Warinner said. It also touches on the power of analyzing the tiny microbes that live in the human body, she said.

"It shows that our microbiome encodes valuable information about our own evolution that sometimes gives us hints at things that otherwise leave no traces at all," Warinner said.

- This press release was originally published on The Harvard Gazette website. It has been edited for style